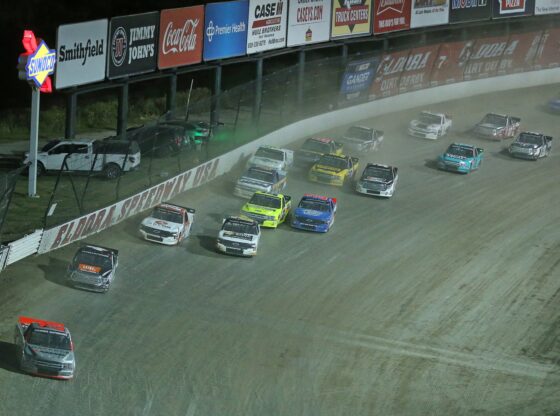 Eldora Speedway bills itself as The World’s Greatest Dirt Track.

Carved from a cornfield in western Ohio by Earl Baltes in 1954, Eldora is a half-mile high-banked clay dirt oval.  Located on State Road 118 — along the Indiana border in the village of New Weston — the speedway features permanent and festival-style seating that can accommodate up to 30,000 patrons.  Situated in a natural amphitheater that lies between the former El Dora Ballroom and the Wabash River, Eldora is the largest sports stadium in the Dayton region.

Track founder and World War II veteran Earl Baltes was a prominent area band leader with no racing experience when he opened Eldora.  On his way to a gig in the early 1950s, he passed through New Breman, Ohio, and stopped at the speedway there.  Baltes was so impressed by the large, enthusiastic crowd that he decided to build his own race track.  Having purchased the El Dora Ballroom two years earlier, Baltes stopped touring with Earl and the Melody Makers and constructed a raceway on the ballroom site.  Eldora opened as a quarter-mile track in 1954.  Two years later, it expanded to three-eighths of a mile, and in 1958 the track was expanded to its present half-mile length.

Eldora races were shown on ABCs’ Wide World of Sports and covered by Keith Jackson and Al Michaels.

Baltes hand-crafted one of the most frighteningly fast, challenging dirt tracks in the world.  He started out with local stock cars and Supermodifieds.  In 1962, Eldora hosted Sprint cars of the United States Auto Club [USAC] and quickly became a favorite venue on the circuit.  A tireless promoter, Baltes stunned the short-track world in 1971 by offering a then-unheard-of $4,000 to the winner of a 100-lap dirt stock car race.  That event, the World 100, is now the most prestigious event in dirt Late Model racing.

The World of Outlaws [WoO] Sprint car troupe launched in 1978.  Of the circuit’s 14 highest paying and most popular races, three are held at Eldora.  The premier event for Sprint cars is the Kings Royal, a three-night event held at Eldora each July.  Thursday night’s race is dubbed Jokers Wild and the winner earns $10,000.  The following evening, the winged open-wheel racers compete for the $12,000 prize that goes to the Knight Before the Kings Royal victor.  The weekend concludes Saturday, with the $50,000-to-win main event.  The 36th consecutive running of the Kings Royal takes place July 18-20 at The Big E.

From 1993 to 2003, the Historical Big One was the richest sprint car race in the country, paying an unprecedented $100,000 to the winner.  Steve “The King” Kinser, the best sprint racer ever, is the only two-time champion of the now-defunct event.  In 2013, NASCAR returned to the dirt for the first time in 43 years with the running of the Eldora Dirt Derby.  Originally branded as the Mudsummer Classic, the 75-mile race has become a crown jewel on the NASCAR Truck Series and is the circuit’s only race on dirt.

In 2001, Bates held the Eldora Million.  His defining moment as a race promoter, he offered one million dollars to the winner – by far the richest in short track race history.

Eldora is where Tony Stewart raced as an up-and-coming USAC driver.  A native of nearby Columbus, Indiana, Stewart went on to be named 1996 Indianapolis 500 Rookie of the Year before winning the 2002 Winston Cup Series NASCAR crown.  In late 2004, Stewart purchased Eldora Speedway from Earl Baltes, who passed away in March 2015. “He was the yardstick other track promoters measured themselves by,” said Stewart.  “He consistently raised the bar, and he did it by creating events everyone else was afraid to promote.”

Eldora Speedway offers just under 18,000 permanent seats and can accommodate another 12,000 hillside spectators.  The track also features VIP suites, which include 16 to 20 persons.  Located high above Turns 3 and 4 – with a view of the cars heading toward you on the backstretch – The Big E’s VIP suites provide an unparalleled view of the legendary action on the high-banked track.  Tickets to the climate-controlled suites – which range from $80 to $350 per seat, depending on the event — include private restrooms, complimentary food and drink, and pit passes.

The world’s greatest dirt track is also the fastest.  In 2002, Craig Dollansky ran the fastest lap ever recorded at Eldora, covering the half-mile oval in 12.707 seconds.  Many events at the famed Ohio raceway have expanded from one-day races to three-day spectacles.  In 2013, Dirt Late Model Dream and World 100 embraced a Thursday-Friday-Saturday program.  The Kings Royal followed suit in 2016.

Currently, in its 66th consecutive season of featuring the biggest events in short track dirt racing, Eldora will host the Johnny Appleseed Classic this Sunday, May 26.  The event will be the final Late Model tune-up before the 25th running of “The Dream” gets underway two weekends later.  General admission tickets Ages 13 & up are $19, while reserved seats cost $24.