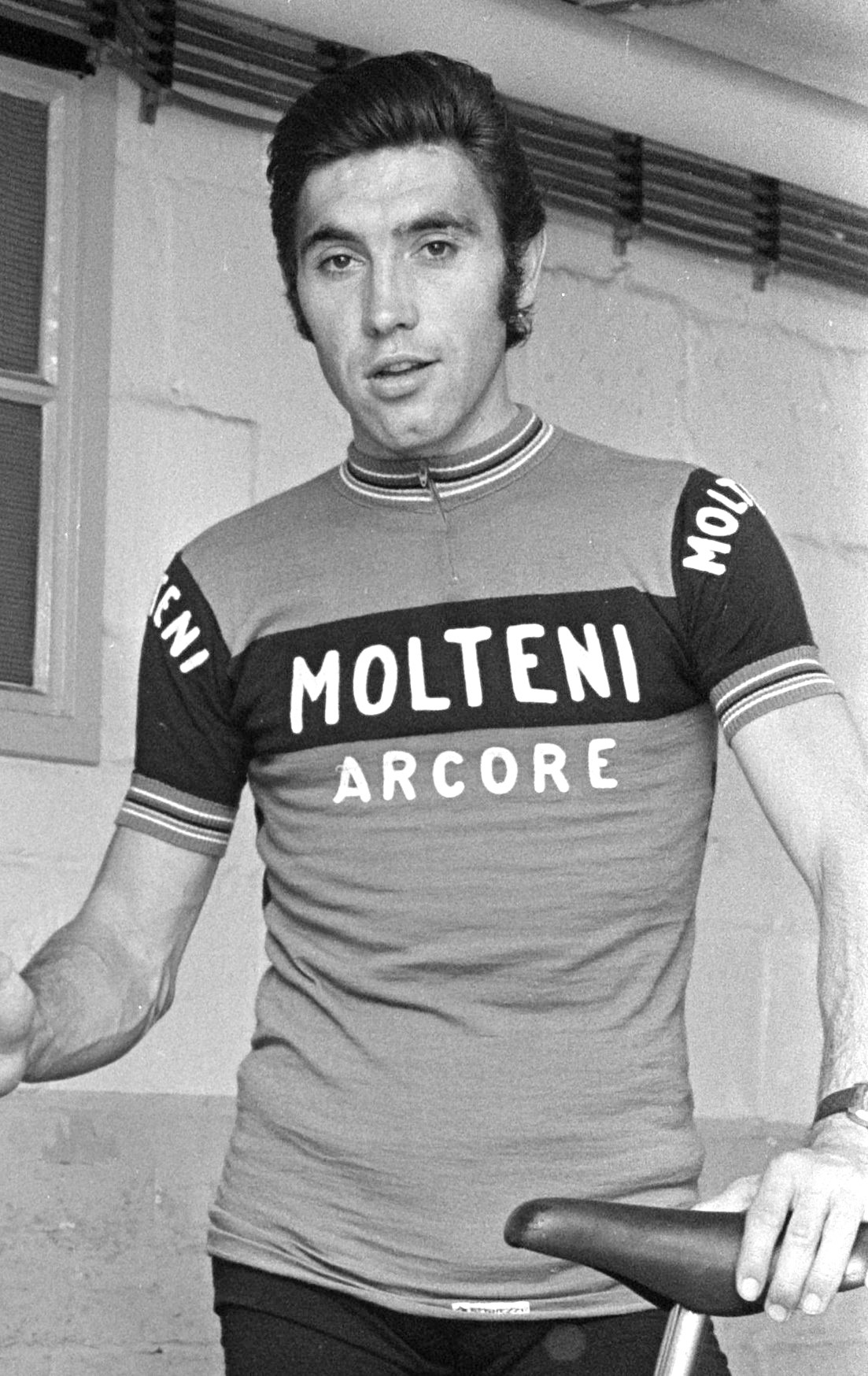 There is little debate that Eddy Merckx is the greatest cyclist ever to ride a bike.

Edouard Louis Joseph Merckx was born in Brabant, Belgium, June 17, 1945, as the oldest of Jules and Jenny’s three children.  Before Eddy’s first birthday, the family moved to Brussels, where his parents ran a grocery store.  At four, Merckx [pronounced Mirks] got his first bike and by age eight was riding to and from school each day.  Merckx played several sports, including basketball, soccer, boxing and tennis, but cycling was his true passion.  At 16, he competed in his first race, finishing sixth.  In October 1961, he won his first race, at Petit-Enghien, and dropped out of school the following year in order to focus on cycling.  After finishing 12th in the men’s road race at the 1964 Summer Olympics, Merckx went on to win 80 races as an amateur, including the 1964 World Amateur Road Race.  He turned pro in April 1965.

The five “Monuments” are the oldest, hardest and most prestigious one-day events in European cycling.  They each have a long history and award the most points [100] of all the events on the UCI World Tour.  Only three riders in history—all of them Belgian–have won all five Monument races during their careers and only Eddy Merckx won each of them more than once.  He won the Milan-San Remo race a record seven times and claimed 19 Monument victories in all.  The three most prestigious races in cycling—called “Grand Tour” events–are the Giro d’Italia, Tour de France and Vuelta a Espana.  Eddie Merckx won eleven Grand Tour races, a record that still stands today.  Four times between 1970 and 1974, Merckx won two of three Grand Tour events—a “Grand Tour Double”—in the same year.  In 1974, he also won the UCI Road World Championship race to become the first  rider to accomplish cycling’s Triple Crown, a feat matched by only one other rider, Stephen Roche in 1987.  The Tour de France is cycling’s premiere event.  Eddy Merckx, nicknamed “The Cannibal” for his insatiable appetite to win, won the Tour a record five times and posted 34 Tour stage wins, the most of all time.  He dominated a decade like no one before or since, winning 64 Grand Tour stages in his career.  In 1972, The Cannibal claimed the Giro d’Italia and Tour de France before bettering the record in The Hour [Daily Dose, April 27] by 800 meters.  A Dutch competitor once said, “First there was Merckx, and then another classification began behind him.”  After sustaining numerous injuries over the course of his 12 year racing career, Mr. Merckx retired from competitive cycling in 1978.  He was 32.

No rider in history has even approached what Eddy Merckx accomplished.  He rode well in the Grand Tours and in the one-day classics.  He was a very good time trialist and climber while also showing great ability to race on the track.  Merckx won virtually every important race; most of them multiple times.  He won the Tour de France five times, Giro d’Italia five times and Vuelta a Espana once for a total of eleven Grand Tour victories.  Merckx won each of cycling’s’ five Monuments more than twice, claiming 19 in all, which is eight more than his nearest competitor.  During the “Merckx Era”—from 1969 to 1975—he won 35 percent of his races and in 1971 claimed 54 of the 120 events he entered.  Merckx was without weakness as a rider, with a style that was constantly attacking.  When told that he won too much, the Belgian explained, “The day when I start a race without intending to win it, I won’t be able to look at myself in the mirror.”  An icon in Belgium, Merckx is the country’s biggest star.  He is the only cyclist in history to win all of the classifications [overall, mountains, points jerseys] in a single year and he did it twice—at the 1968 Giro d’Italia and 1969 Tour de France.  Mr. Merckx’ record of 525 career victories—445 as a pro—is untouchable.  The Cannibal was the first cyclist in history to achieve the sport’s Triple Crown, winning the Giro d’Italia, Tour de France and World Championships in 1974.  Since his retirement from racing in 1978, Mr. Merckx has remained active in the cycling world.  He began his own manufacturing company in 1980, coached the Belgian national team and started two Tours—Qatar and Oman.  In his words, Eddy Merckx is “a bike builder, first in the factory and now as an ambassador.”