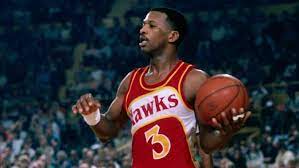 Eddie Arnet Johnson has scored more points than any player in NBA history to have not played in an NBA All-Star game.

Born in Chicago, Illinois on May 1, 1959 as the sixth of seven children raised by a single mother, he grew up in a tough neighborhood surrounded by gangs, drugs and violence and found safety and solace in shooting a basketball. Chicago was loaded with basketball talent in the 70’s and he played with and against Mark Aguirre, Isiah Thomas, Doc Rivers and Terry Cummings, all future major college and NBA stars. Johnson attended George Westinghouse High School on Chicago’s west side and, as a senior, teamed with Aguirre and Norman “Skip” Dilliard to form one of the most talented squads in the state but lost to their rival, Wendell Phillips Academy, 77-65, in the AA Super Sectionals. Johnson was the top player in the state his senior year and was named Player of the Year by the Chicago Sun Times newspaper, an honor that Aguirre and Rivers earned in the two subsequent years. He was recruited by DePaul, Michigan State and Michigan but chose to stay home and play at Illinois, beginning a trend to keep home-grown talent within the state. He was a two-time MVP for the Illini and was voted All-Big Ten his senior year, a season in which he made one of the most famous plays in school history. On January 1, 1979, Magic Johnson’s top-ranked Michigan State Spartans visited Assembly Hall in Champaign, Illinois to face the Illini. Both teams were undefeated and the game took on the significance of a heavyweight title fight. Eddie hit a jump shot from the corner with two seconds left to give the Illini a 57-55 victory in what some called the most memorable event in Illinois athletics since the 1963 Rose Bowl. Michigan State went on to win the national championship over Larry Bird and Indiana State that season in what is still the most-watched basketball game in NCAA history.

“EJ” was selected by the Kansas City Kings with the 29th pick of the 1981 NBA Draft. The 6’7” sharpshooter played small forward and moved to Sacramento with the Kings franchise in 1985, remaining there until 1987, when he joined the Phoenix Suns. Johnson played for the Suns for three seasons and won the NBA Sixth Man Award for the 1989-90 season. Previous winners included Kevin McHale, Bill Walton and Ricky Pierce. Johnson moved to the Seattle Supersonics for the following three seasons before joining the Charlotte Hornets for the 1993-94 campaign. He bolted for the Greek League and signed with the Olympiacos for the 1994-95 season and became a cult sensation, firing four decisive 3-pointers in the final minutes of the semi-final game of the Euroleague Final to defeat archrival Panathinaikos and advance to the championship game. “EJ” scored 27 points and hauled in 10 rebounds in the contest but Olympiacos lost to Real Madrid in the championship game, 73-61. He returned to the NBA and played for the Indiana Pacers and Houston Rockets from 1995-1998 before retiring three games into the 1999 season.

Eddie Johnson was named to the University of Illinois All-Century Team and had his #33 jersey enshrined when the school celebrated its 100th year of basketball in 2004. He is currently the Illini’s fifth all-time rebounder and seventh all-time leading scorer. He played 17 seasons, scored 19,202 points and competed in nearly 1,200 games in the NBA, averaging 16 points and 4 rebounds over the course of his career, making him the best player never to make an NBA All-Star team. After his playing career was over, “EJ” became the color commentator for Arizona State men’s basketball, the WNBA’s Phoenix Mercury and currently broadcasts Phoenix Suns NBA basketball. He is also a motivational speaker, has authored two books, contributes to the Hoopshype.com website and broadcasts NBA Today with Justin Termine for Sirius XM NBA Radio.