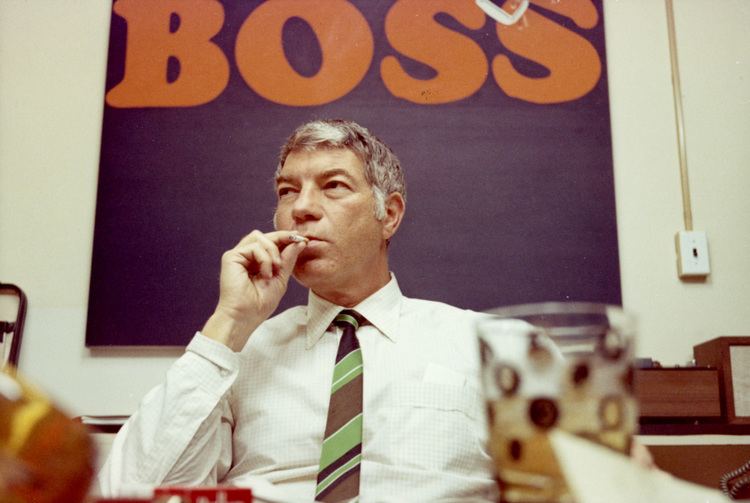 Edwin Milton Sabol may be the single most important individual in the history of the National Football League and he never blocked or tackled anyone during his storied career.

Born in Atlantic City, New Jersey on this date in 1916, he was raised in Blairstown. He excelled in several sports at Blair Academy, a private boarding high school located about 60 miles west of New York City, lettering in track, football and swimming. He set a World Interscholastic Swimming record in the 100 yard freestyle while at Blair and accepted a swimming scholarship to Ohio State University. He was selected for the 1936 U.S. Olympic team but declined to participate because of the Berlin Games’ connection to Nazi Germany. Sabol competed as the lead-off man on the 400 yard freestyle relay teams that won Big Ten and AAU Championships in 1937 and was also involved with OSU’s drama program. He dropped out of college after two years and spent 18 months as a rifleman in Europe during World War II. He married Audrey Siegal in 1940 and briefly pursued acting, performing in Where Do We Go From Here on Broadway. One of their wedding gifts was a $100 gift certificate, which Mr. Sabol used to buy a 16 mm Bell & Howell movie camera with which he recorded family activities. Sabol went to work for his father-in-law selling overcoats in Philadelphia but disliked the work and left to explore an idea he had.

Ed Sabol was 45 years old when he contacted NFL Commissioner Pete Rozelle to discuss obtaining the rights to film the 1962 NFL Championship game. Sable offered twice the previous bid of $ 1,500 in order to get the assignment and Rozelle accepted his offer. Mr. Sabol’s previous experience consisted of making home movies of his family and capturing footage of his son Steve playing youth and high school football. Suddenly, he had to come up with a production company. Steve came home from Colorado College for winter break and the two formed Blair Motion Pictures and hired a film crew. Steve joined the company full time as a cinematographer after graduation two years later. The ’62 championship game between the Green Bay Packers and New York Giants was played at Yankee Stadium in 15 degree weather with gusting winds up to 30 miles per hour. Sabol built bonfires in a dugout to thaw out his cameras and called his film “Pro Football’s Longest Day”. Mr. Rozelle called it the best football film he had ever seen and it was the start of an empire that played a major role in making professional football the No. 1 spectator sport in America. Ed Sabol took a Hollywood filmmaker’s approach to his new venture, using color film, slow motion, close ups, stirring background music and on-field microphones. Perhaps most importantly, he employed John Facenda, who later became known to NFL fans as “The Voice of God”, to narrate the films.

Blair Motion Pictures became NFL Films in 1964 and was charged with serving as the league’s own motion picture company that would promote the NFL and preserve the history of the game. It has been said that the only other human endeavor more thoroughly captured on 16 mm film than the NFL is World War II. Over fifty years later, it earns more than $50 million in revenue a year and is growing at a double digit rate. NFL Films has won over 100 Sports Emmys and in 2003 the father and son were honored with the Lifetime Achievement Emmy from the National Academy of Television Arts and Sciences for setting the standards in sports filmmaking. Ed Sabol retired as President and Chairman of NFL Films in 1995 and was inducted into the Pro Football Hall of Fame in 2011. He died in Scottsdale, Arizona in February of this year at the age of 98.

“Through his determination and innovative spirit, Ed Sabol transformed how America watched football and all sports”– NFL Commissioner Roger Goodell