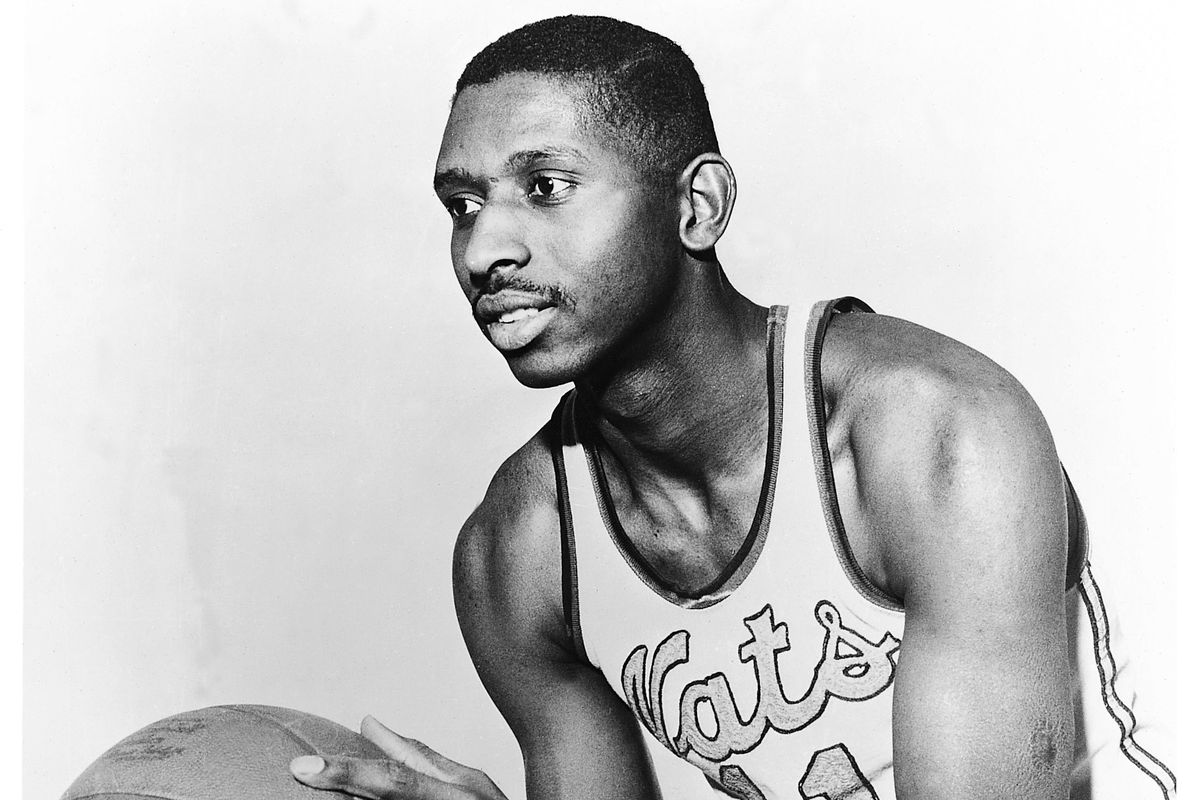 Earl Lloyd is the Jackie Robinson of the NBA.

The first African-American to play in an NBA game, Lloyd paved the way for Bill Russell, Julius Erving, Michael Jordan and LeBron James.  But unlike Jackie Robinson, whom filmmaker Ken Burns compared to Thomas Jefferson, Lloyd ranks as a largely overlooked pioneer.

Earl Lloyd played nine NBA seasons between 1950 and 1960.  His best year was 1954-55, when he averaged 10.2 points and 7.7 rebounds per game to help the Syracuse Nationals to their only NBA championship in franchise history.  In the process, the 26-year-old power forward became the first black player to win an NBA title.

Although he was never a household name, Lloyd was a professional basketball groundbreaker.  He said he encountered virtually no racist treatment from his teammates or opponents during his decade in the NBA, yet did endure mistreatment by the public.  After a game against the Pistons in Fort Wayne, Lloyd was walking off the floor with teammate Johnny Kerr when he was spat upon by a fan.  On the road, Lloyd was often allowed to stay at the team hotel, then forbidden to eat there.  Humble and dedicated, Lloyd simply persevered and played harder.  “Earl was a great teammate,” said Kerr, who was a three-time All-Star with the Nats.  “He’s also a great guy and hero.”

“I don’t think my situation was anything like Jackie Robinson’s – a guy who played in a hostile environment, where some of his teammates didn’t want him around,” Lloyd said in comparing his journey to Robinson’s.  “In basketball, folks were used to seeing integrated college teams.  There was a different mentality.”

At 6’5” and 200 pounds, Earl Lloyd set bone-rattling picks and attacked the boards.  He was also a stingy defender who was often assigned to guard the opposing team’s best offensive player.  Lloyd appeared in seven games for the Washington Generals before they disbanded midway through his first year in the league.  He then played six seasons with the Syracuse Nationals, who moved to Philadelphia in 1963 to become the 76ers.  A “lunch-bucket” type player, Lloyd played his final two years with the Detroit Pistons.  He retired having scored 4,682 points and grabbing 3,609 rebounds in 560 NBA games.

Born April 13, 1928, in Alexandria, Virginia, Earl Francis Lloyd attended segregated Parker-Grey High School.  He honed his basketball skills on the inner-city playgrounds of nearby Washington, D.C.  A two-time All-State performer, he received a basketball scholarship to West Virginia State.  The Moon Fixer led the Yellow Jackets to two conference championships.  As a sophomore, Lloyd guided West Virginia State to a perfect 30-0 record – the only undefeated team in America.  After being named All-America as a junior and senior, the Washington Capitals selected Lloyd in the ninth round [100th overall] of the 1950 NBA draft.

“The playground basketball wars in D.C. made college and the NBA a piece of cake,” Lloyd said about those days that prepared him for life.

Along with Chuck Cooper and Nat “Sweetwater” Clifton, Lloyd was one of three players to enter the NBA in 1950.  While Cooper was the first to be drafted [12th overall] and Clifton was the first to sign a contract, the schedule allowed Lloyd to become a basketball trailblazer.  On Halloween night 1950, The Big Cat made NBA history, scoring six points and grabbing a game-high ten rebounds in a 78-70 road loss to the Rochester Royals.  He also made history, becoming the first black player to enter a league game.  Cooper made his debut with the Boston Celtics the following evening, while Clifton entered his first game as a New York Knick on November 3.

Washington folded during Lloyd’s rookie season, in January 1950.  He was then drafted into the U.S. Army, where he fought in the Korean War.  In 1952, he joined the Nationals after being picked up on waivers.  Lloyd helped Syracuse reach four Eastern Division finals and back-to-back NBA Finals, in 1954 and 1955, then finished his career with Detroit.

After retiring as a player in 1960 at 32, Lloyd spent the next five seasons as a Pistons scout.  A superb talent finder, he discovered Willis Reed, Earl “The Pearl” Monroe, Ray Scott and Wally Jones.  In 1968, Lloyd broke another color barrier when he signed on with the Pistons to become the first African-American assistant coach in NBA history.  Three years later, he became the league’s second-ever black head coach when he replaced Butch van Breda Kolff, who had resigned as coach of the Pistons.  Despite a lineup that included future hall of famers Dave Bing and Bob Lanier, the Pistons went 20-52 the rest of the season, and Lloyd was fired seven games into the 1972-73 campaign.  “Coaching is only fun if you win,” said the affable Lloyd.  “I didn’t win.  It wasn’t fun.”

Lloyd found success after leaving pro basketball.  He worked in job placement for the Detroit Board of Education for more than ten years, then later helped in the community relations department of Dave Bing’s steel and automobile parts company.  Mr. Lloyd retired in 1999 and moved to Tennessee with his wife, Charlita, with whom he had three sons.

Earl Lloyd was named CIAA Player of the Decade for the 1940s and is a member of the both the NAIA’s Silver and Gold Anniversary Teams.  He was elected to the Virginia Sports Hall of Fame in 1993 and the Naismith Basketball Hall of Fame in 2003.  February 9, 2001, was declared Earl Lloyd Day by Virginia’s governor, and Mr. Lloyd died in Crossville, Tennessee, February 9, 2015.  He was 86.