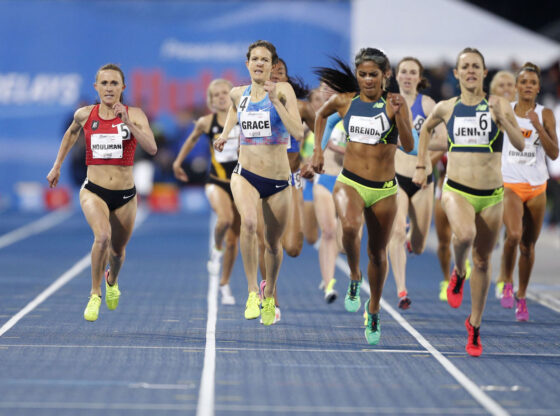 The Drake Relays is much more than a track meet.  For Drake University students, it is the greatest week of the year. Billed as America’s Athletics Classic, the Drake Relays is one of the top track and field events in the United States.  The meet attracts more than 40,000 spectators, 220 college and university teams and world-class athletes [more than 110 athletes from the 2012 London Olympics have competed at the Drake Relays].  The Relays include elementary, middle and high school athletes while also hosting events for college, elite and masters-division [40+]competitors.  Held since 1910, the iconic carnival celebrated its 108th edition in April 2017.  Nike co-founder, Phil Knight, was a miler at Oregon when he helped the Ducks capture the four-mile relay at Drake in 1959.  Country music’s Garth Brooks threw the javelin for Oklahoma State in the early 1980s.  Carl Lewis ran the 100 in the snow in 1994, and Des Moines Roosevelt’s Lolo Jones was a hurdling sensation at the Drake Relays before suffering Olympic heartbreak in 2008 and 2012. Held at Drake University, a private co-educational institution in Des Moines – Iowa’s capital and largest city – the Relays is the school’s most famous event.  Founded in 1881 by Francis Marion Drake, a Union General in the Civil War, Drake enrolls over 3,300 undergraduates from 40 states and more than 40 countries.  Alma mater of legendary Phoenix Suns’ announcer Al McCoy and Masters and British Open champion Zach Johnson, Drake has hosted the Relays – one of the nation’s premier events – for over a century. Opened in 1925, Drake Stadium plays hosts to the Relays.  The 14,500-seat stadium is the largest in the Pioneer League, and is home to school’s football team as well as that of nearby Des Moines Roosevelt High School.  Drake Stadium has hosted four NCAA Division I outdoor track and field championships and annually hosts the Iowa boys and girls track state championships.  Officially named the Jim Duncan Track to honor the long-time public address announcer of the Relays, the track is affectionately known as the “Blue Oval.”  In 1969, a $ 175,000 tartan track was installed.  A $ 15 million renovation was completed in 2006 that expanded the lanes and allowed for more events, so Friday night sessions were added to the Drake Relays that year.  A new track surface – using the same material as the Olympic venues in Beijing and London – was installed in 2016. Founded in Beaconsfield, Iowa, and headquartered in West Des Moines, Hy-Vee is a supermarket chain that famously employed Pro Football Hall of Fame quarterback Kurt Warner as a stock boy, where he earned $ 5.50 an hour working in their Cedar Rapids store while training for a spot in the Arena Football League’s Iowa Barnstormers in the mid-1990s.  Hy-Vee has sponsored the Drake Relays since 2013.  The event airs on ESPN and NBCSN and, with $ 75,000 in purses, is the richest track and field event in the U.S. The inaugural meet was contested in a blizzard in 1910, when 100 spectators and 82 athletes – all from Des Moines area colleges and high schools – gathered for a one-day event at Drake’s Haskins Field.  The next year, the carnival drew 250 athletes and 500 fans.  The first world record set at Drake came in 1914.  By 1922, the Relays had been expanded to a two-day affair and drew over 10,000 fans while becoming the first track and field event broadcast on radio.  For the 1926 meet, Drake Stadium replaced Haskins Field as the host venue.  Women’s events were added in 1961 with Wilma Rudolph competing in the 100.  Saturdays have sold out annually since 1966, and the meet converted to all-metric ten years later. Relay festivities transform Drake University.  Students kick off the carnival by painting Carpenter Avenue near the center of campus.  The event serves as a second homecoming for the school, with numerous alumni reunions taking place during the week.  The festivities begin with a parade on Saturday, followed by the “Beautiful Bulldog” contest on Sunday [DU’s mascot is a bulldog].  This year’s pageant was won by “Prudence,” a two-and-a-half-year-old English bulldog from Des Moines, who beat out 37 other contestants from ten states.  Prudence earned the illustrious cape, crown and throne — along with the title of official mascot for the 2017 Drake Relays.  Tuesday brings the Grand Blue Mile, an all-ages one-mile run through the heart of downtown Des Moines.  The first competitions get underway Wednesday.  The pole vault is contested indoors at Capital Square, while the decathlon and heptathlon events begin at Drake Stadium.  The festivities conclude with the distance carnival Thursday evening. Some of the finest-ever athletic performances have taken place on the Blue Oval.  The Drake Relays have produced 14 world records, while several meet records have been set by some of the greatest athletes in American track and field history.  In 1976, Auburn sprinter Harvey Glance covered the 100 in 10.01, a mark that still stands.  Steve Scott clocked 3:38.27 in the 1,500 meters at the 1984 Relays, while Alan Webb, a prep phenom who broke two of the great Jim Ryun’s records that had stood for nearly four decades, set a Drake Relays mark by covering the mile in 3:51.  The longest-standing Relays record was set by Ralph Boston in 1961, when he leaped 26’ 1 ¼ “ in the long jump.

The legends of track and field have competed in Des Moines.  The Drake Relays Hall of Fame includes Jesse Owens who, at the 1935 meet, set an American record in the broad jump and tied the meet record in the 100-yard dash.  Other track icons in the Relays hall include Glenn Cunningham, Ralph Metcalf, Al Oerter, Bruce Jenner, Michael Johnson, Rod Milburn Dave Wottle and “Bullet” Bob Hayes.  Olympians Gwen Torrence, Amy Acuff and Rudolph have all been enshrined in the Drake Relays Hall of Fame.  In 1967, Kansas’ Jim Ryun earned the Maury White Award as the meet’s outstanding performer. The 2017 Drake Relays, held April 26-29, saw world-leading marks set in three of the four Rio Olympic Rematch races during the final day of competition, and they came within an hour of one another.  First, Georganne Moline won the women’s 400 hurdles.  Next, Keni Henderson beat an incredibly strong field to win the women’s 100 hurdles, which featured eight of the top-ten ranked hurdlers in the world.  Omar McLeod capped things off with a Drake Relays record in the men’s 110 hurdles, a race that produced three of the top four times in the world in 2017.