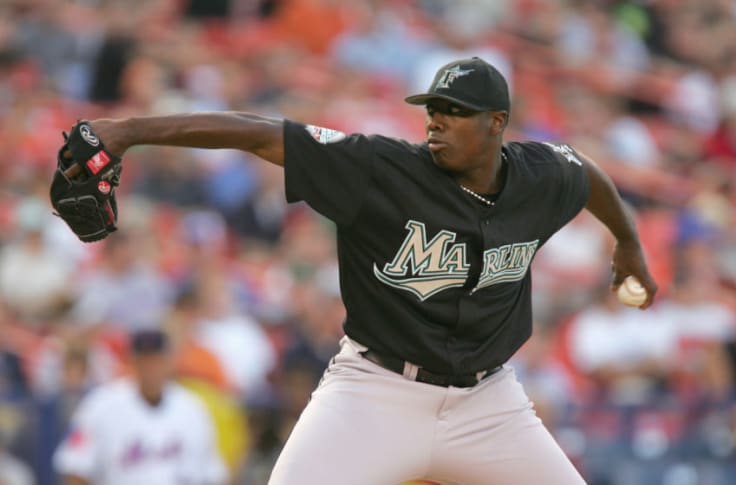 In 2003, the Florida Marlins rode the D-Train to a World Series title.

In his early 20s, Dontrelle “The D-Train” Willis seemed destined for Cooperstown.  Possessing one of baseball’s quirkiest windups and a million-dollar smile, he was an instant sensation in his rookie season of 2003.

The D-Train was a cult star.  The Mark Fidrych of the mid-2000s, people wanted to see him pitch.

One of the most entertaining players in baseball, the jovial, always-positive Willis was beloved by teammates.  He played for four teams over nine seasons, starting over 200 games and amassing 896 strikeouts.

Tomorrow is Dontrelle’s birthday.  Born in Oakland in 1982, Dontrelle Wayne Willis was the only child of a single mom who worked as a welder.  He grew up in Alameda, California, rooting for the Oakland A’s and idolizing their star pitcher, Dave Stewart.

After going 12-1 with a 0.83 ERA for Encinal High School – alma mater of MLB greats Willie Stargell and Jimmy Rollins – the Chicago Cubs selected Willis in the eighth round of the 2000 Major League Baseball draft.

Considered a “poor man’s CC Sabathia,” Willis was traded to the Marlins in March 2002.  He was sent to the minors, where he led the Class-A Midwest League in ERA and then dominated at Double-AA Carolina.  In May 2003, Willis made his big league debut, allowing seven hits in six innings in a no-decision against the Rockies.

Willis started 27 games for the Marlins in 2003, going 14-6 with a 3.30 ERA.  The lanky lefthander made the All-Star team and was named Rookie of the Year as Florida beat the New York Yankees to claim the second World Series in franchise history.

A two-time All-Star, Willis peaked at 23.  In 2005 – his third big league season, the charismatic southpaw led major league baseball in wins [22], complete games [7] and shutouts [5].  Still the only 20-game winner in Marlins history, he finished second in Cy Young Award voting and earned the Warren Spahn Award as the best left-handed pitcher in the National League.

In his first four seasons, Willis averaged over 200 innings and posted an ERA of 3.44 — very good for that era.

Things took a rough turn in 2007 and he was traded, alongside Miguel Cabrera, to the Detroit Tigers in December of that year.

Willis missed time with a knee injury and arm trouble.  Struggling to find his control, he was sent to the minors.  After three seasons in Motown — in which he went 2-8 while appearing in 24 games – Willis was dealt to the Arizona Diamondbacks.

By 2010, The D-Train was off the rails.  After walking nearly twice as many batters as he struck out, the Diamondbacks released Willis five weeks after signing him.

“I went from being an All-Star,” said Willis, “to a liability.”

He signed a minor league contract with the Cincinnati Reds, then was called back up to the big leagues in July 2011.  Willis started 13 games for the Reds before being released at the end of the 2011 season.

Willis bounced around in the minor leagues for the next three seasons, making stops in Norfolk, Long Island and Salt Lake City, but never pitched in the majors again.

In 2014, he threw two-thirds on an inning for the Giants Triple-A team in Fresno and made two starts for the independent Bridgeport Bluefish.

A full decade removed from the season that made his name, smile and leg kick part of the American sports consciousness, Dontrelle Willis officially retired in March 2015.

“Getting back to the big leagues with the Reds, that was probably the proudest moment of my career.”  — Dontrelle Willis