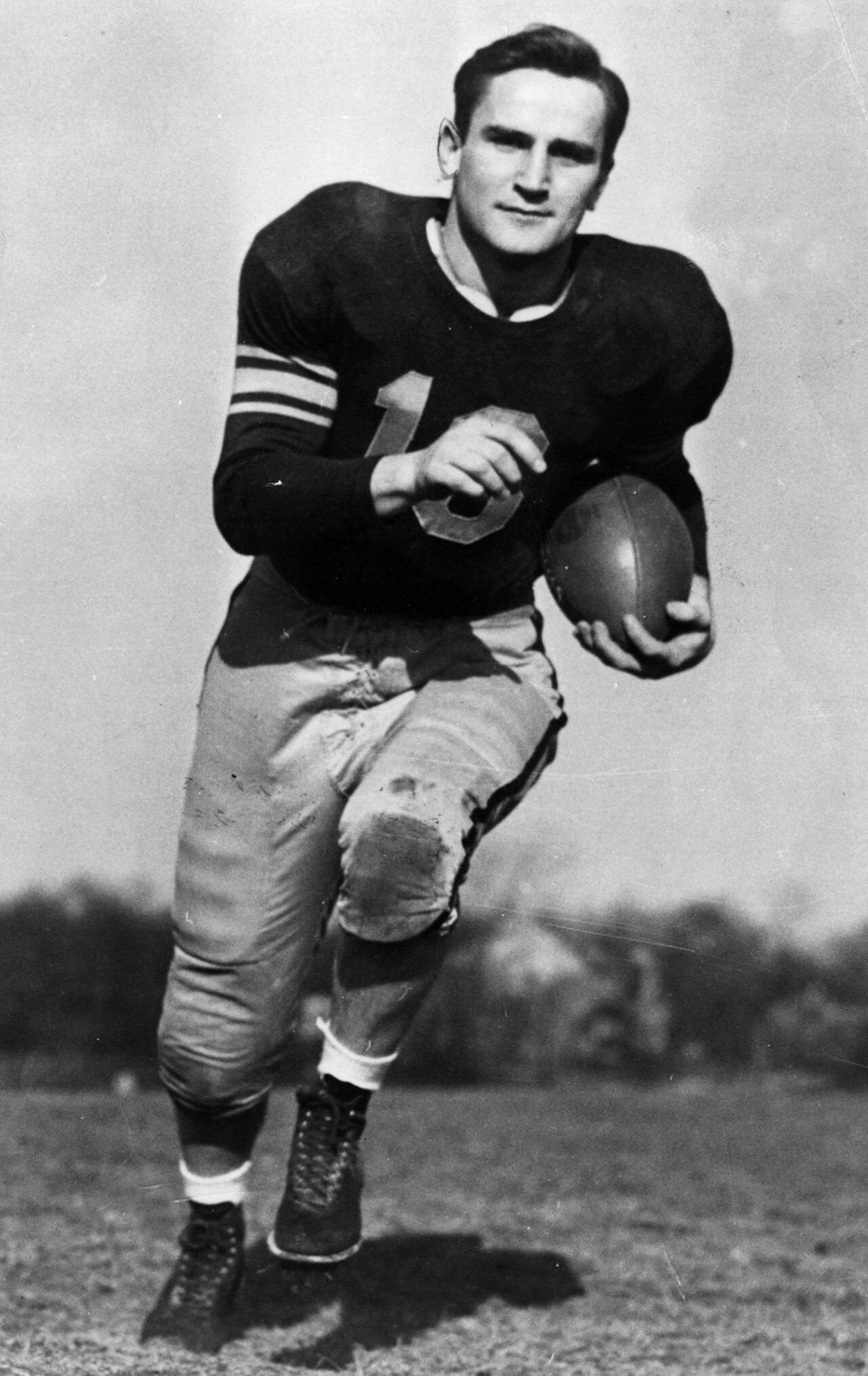 Donald Francis Shula is the winningest head coach in the history of the National Football League. Shula was born on January 4, 1930 in Grand River, Ohio, a small fishing village along the shores of Lake Erie in the northeastern part of the state. His parents immigrated from Hungary and his father worked as a commercial fisherman for $15 a week to help support their six children. Shula liked football but, at age 11, was forbidden from playing after sustaining a nasty facial cut in a neighborhood pickup game. He forged his parents’ signatures on a permission slip so he could play for the school team in 8th grade and kept it a secret until he was made a starter. He attended Harvey High School and earned 11 varsity letters in football, basketball and track–playing halfback in a single wing offense and graduating in 1947. The majority of college football scholarship offers at that time were going to veterans coming home from World War II, so Shula decided to work a year and then go to college. A local high school coach recommended him to Herb Eisele, who had just landed the head coaching job at John Carroll University– a small Jesuit school in suburban Cleveland– and he was offered a scholarship. In his senior season, Shula rushed for 125 yards to lead the Blue Streaks to an upset win over heavily favored Syracuse. He graduated in 1951 with a sociology degree and was selected by the Cleveland Browns in the ninth round of that year’s NFL Draft. Shula was one of two rookies to make legendary coach Paul Brown’s team and signed as a defensive back for $ 5,000 per year, playing in all 12 games and grabbing four interceptions. He earned a master’s degree in physical education at Case Western Reserve before being traded to the Baltimore Colts in 1953. It was the Colts first season in Baltimore [the original Colts folded in 1950 and the Dallas Texans relocated to Baltimore, where they were renamed the Colts] and the franchise had just hired Weeb Eubank as their new head coach. Shula played four seasons with the Colts before being waived at the end of training camp in 1957 and spent one year with the Washington Redskins before retiring. In seven NFL seasons, he played in 73 games, intercepted 21 passes and recovered four fumbles. Shula’s first coaching job was as an assistant at the University of Virginia in 1958. He moved to the University of Kentucky in 1959 and, one year later, got his first NFL job coaching defensive backs for the Detroit Lions. He was hired to replace Eubank as head coach of the Baltimore Colts in 1963 at age 33, making him the youngest head coach in NFL history at the time. Shula immediately turned the franchise around, going 8-6 in his first season. They went 12-2 in his second year and earned a trip to the NFL championship game–losing 27-0 to Cleveland–and Shula was named Coach of the Year, an award he would win in three of his first five seasons and six times over the course of his career. The Colts went 13-1 in 1968 and were heavily favored over the New York Jets in Super Bowl III before losing, 16-7, in one of the biggest disappointments of Don Shula’s career. He was hired by the Miami Dolphins after the 1969 season to become just the second head coach in the franchise’s existence. The Dolphins had a nucleus of young, talented players and quickly became a powerhouse, winning three consecutive AFC championships from 1971-73. Miami went 17-0 in 1972 and beat the Washington Redskins in Super Bowl VII to complete the only perfect season in NFL history. They repeated as Super Bowl champions the following season in what would be Shula’s last championship, as the Dolphins played and lost in the title games following the 1982 and 1984 seasons. Mr. Shula served as a head coach in the National Football League for 33 seasons, winning 14 division titles, five AFC championships, one NFL championship and two world championships. He appeared in six Super Bowls and won 347 games, the most of all time. His overall record is 347-173-6 and his .678 winning percentage is the best in league history. His Miami teams had a losing record in only two of his 26 seasons there. He reached the playoffs in 20 of his 33 NFL seasons, won at least 10 games 21 times and his teams were always amongst the least penalized in the NFL. Don Shula was elected into the Pro Football Hall of Fame in 1997 and the Miami Dolphins Ring of Honor in 1996. Sports Illustrated named him “Sportsman of the Year” in 1993, Don Shula Stadium is now home to the John Carroll University Blue Streaks and Miami’s Sun Life Stadium dedicated a statue to him in 2010.