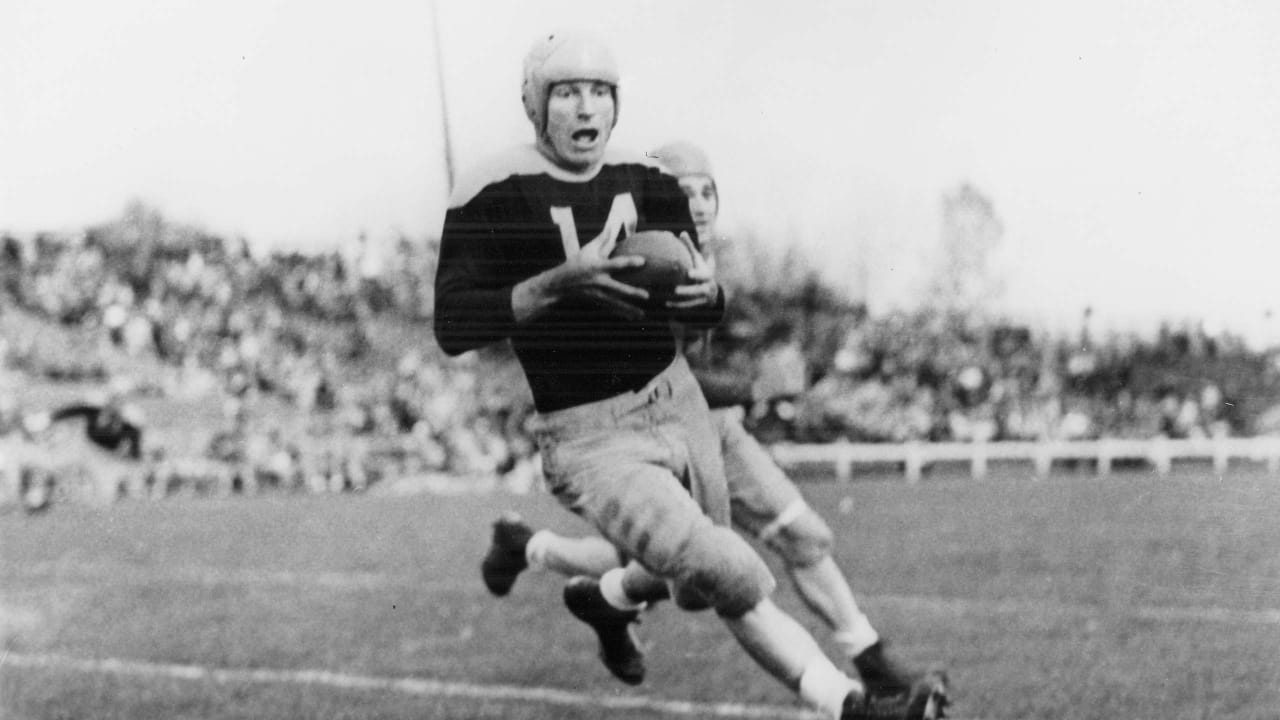 Don Hutson was to pass catching what Babe Ruth was to home runs—he redefined the record books and there was nobody remotely close to him when he played.  Hutson invented modern pass receiving.  He was the first great receiver and changed the way the game was played.  The “Alabama Antelope” was ahead of his time by a half century.  He led the league in touchdowns eight times.  More than 70 years later, nobody else has done it more than four times.  Hutson played 11 seasons with the Green Bay Packers.  In nine of those years, he was the top touchdown receiver in the league [Jerry Rice is second all-time with six].  He led the NFL in scoring five straight times, was league MVP in 1941 and 1942, and retired in 1945 with 99 career touchdowns—62 ahead of his closest competitor.  Hutson created the pass pattern.  His precise routes were revolutionary and his speed—9.7 for 100 yards—allowed him to outrace every defender in the league.  Offenses rarely threw in those days, and completion rates were only 30 percent.  In 1942, Don Hutson caught 74 passes.  His nearest rival caught 27 that season.

Born in Pine Bluff, Arkansas, January 31, 1913, Donald Montgomery was one of Roy and Mabel Hutson’s three sons.  A star in baseball and an all-state basketball player, he did not start for the Pine Bluff High School varsity football team until his senior year.  An outstanding centerfielder, Hutson accepted a partial baseball scholarship to the University of Alabama, where he also ran track.  He walked on to the football team and starred at end opposite Paul “Bear” Bryant [Daily Dose, 11/28/16].  “Don had the most fluid motion you had ever seen when he was running,” recalled Bryant.  “It was like he was going just as fast as possible when all of a sudden he would put on an extra burst of speed and be gone.”  As a senior, Hutson was named All-America after leading the Crimson Tide to an undefeated season and a meeting with Stanford in the 1935 Rose Bowl.  In Pasadena, the 6’1”, 183 pound end caught six passes—including two touchdowns—and amassed 165 receiving yards to help the Tide win the national championship.

In 1935, Don Hutson signed with both the Green Bay Packers and Brooklyn Dodgers of the National Football League.  The league had to determine which contract was valid and decided to honor the one that was postmarked first, which was Green Bay’s.  Determined to avoid this calamity in the future, the NFL instituted the draft the following year.  Hutson’s first catch as a pro was an 83-yard touchdown pass on the first play from scrimmage against the Chicago Bears in the second game of the 1935 season.  He went on to catch 98 more touchdowns in his career, a record that stood for more than four decades, until Steve Largent broke it in 1989.  The greatest player in the NFL’s pre-World War II days, Hutson earned a whopping $ 300 per game from the Packers, a sum that was unheard of at the time.  He led Green Bay to three NFL titles—in 1936, 1939 and 1944—and was selected to the All-NFL Team nine times in 11 seasons.

Hutson created pass patterns and was the first receiver to use fakes.  He was the first player to be double-teamed and his mere presence on the field changed defensive concepts.  In the run-oriented 1930s and 40s, Hutson once had 14 catches in an afternoon.  He collected 237 receiving yards in a single game and caught at least one pass in 50 straight games.  One of every 4.9 of Hutson’s receptions went for a touchdown.  By comparison, Jerry Rice—the NFL’s all-time leading touchdown maker—scored a TD on one of every 7.8 catches in his career.  Like all players of his era, Hutson played both ways.  In his final six seasons, he intercepted 30 passes from his safety position and led the NFL in interceptions in 1940.   He also was the Packers placekicker, often kicking PATs after scoring a touchdown.  Hutson made 94 percent of his extra-point kicks in an era when 80 percent was the standard.  In one quarter of a 1945 game, Hutson caught four touchdown passes and kicked five PATs for 29 points—a record for points in a quarter that will likely never be broken.

Don Hutson is the greatest football player the University of Alabama has ever produced.  He is also the greatest Green Bay Packer of all time.  When he retired in 1945, Hutson held 18 NFL records—including most receptions.  His 488 career catches were 200 more than his nearest competitor.  The Heisman Trophy was first awarded in 1936, two years after Hutson’s senior year at ‘Bama.  In an attempt to name retroactive Heisman winners, the National Football Foundation awarded Hutson the trophy for 1934.  The Green Bay Packers named their indoor practice facility the “Don Hutson Center.”  At a dedication to the facility in 1994, Packers GM Ron Wolf said, “I don’t know if there is such a thing as royalty in pro football, but this is the closest I’ve ever come to it.  Don Hutson is most certainly the greatest player in the history of this franchise.”

Mr. Hutson is a charter member of both the college and pro football halls of fame.  He was elected to the Wisconsin Athletic Hall of Fame in 1951 and Alabama Sports Hall of Fame in 1968.  Hutson was named to the NFL’s 1930s All-Decade Team as well as the 50th and 75th Anniversary All-Time teams.  In 1999, he was ranked sixth on The Sporting News list of the 100 Greatest Football Players.  Donald Montgomery Hutson died in Rancho Mirage, California on June 26, 1997, at the age of 84.

On this date in 1951, the Green Bay Packers retired Don Hutson’s number 14.  His was the first of six numbers the franchise has ever retired.

“For every pass I caught in a game, I caught a thousand in practice.”