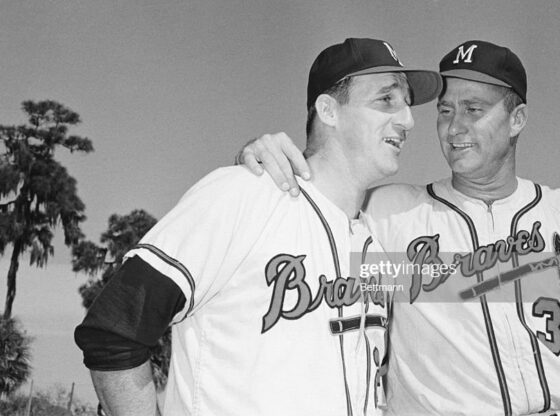 Today we examine two Dominant Duos, the most magnificent number one and number two starters ever to toe the slab.

The game of baseball has witnessed many tremendous tandems in its rich and storied history.  From Warren Spahn and Lew Burdette to Juan Marichal and Gaylord Perry.  Maddux and Glavine, Hunter and Blue.   Palmer and Cuellar gave way to Scherzer and Strasberg. The national pastime has delivered some powerful pairs.

Selecting the “best ever” is always tricky, especially in baseball, where the evolution of the game makes comparing statistics across eras nearly impossible.  With all due respect to Christy Mathewson and Eddie Plank, as well as Kershaw and Greinke, here are MLB’s Butch Cassidy and the Sundance Kid – the greatest one-two punches in major league history.

Randy Johnson pitched 22 years in the big leagues and Curt Schilling pitched 20.  But they played just four seasons together for the Arizona Diamondbacks at the turn of this century while powering the Snakes to the 2001 World Series title.

Randy Johnson amassed a record of 21-6 in 2001.  His 2.49 ERA led the NL and he averaged a record 13.4 strikeouts per nine innings.  Like Schilling, the Big Unit was magical in the World Series, going 3-0 while allowing only two runs in 17.1 innings of work.  In Game 7, RJ earned the win after getting the last four outs in a rare relief appearance to secure the first – and only – World Series title in Diamondbacks history.  The following month, Johnson and Schilling were named Sports Illustrated 2001 Sportsmen of the Year.

The twosome was equally terrific the following year.  Like a fine wine, Johnson got better with age [RJ went 103-49 with a 2.65 ERA after his 35thbirthday].  The Big Unit led the NL in wins, ERA, innings pitched and strikeouts to earn his fourth consecutive Cy Young Award.  Schilling was equally brilliant.  The right-hander was the best in the league at keeping opponents off the base paths.  Shill led the league in WHIP [walks and hits per inning pitched], averaged one walk per nine innings pitched, and compiled a strikeout-to-walk ratio of 9.58:1 [a ratio of 2:1 is good and 3:1 is superb].

Sandy Koufax and Don Drysdale formed the most dominant pitching tandem of the 1960s.  Both spent their entire careers with the Dodgers: a dozen seasons for Koufax, 14 for Drysdale.  Together, the aces led the Dodgers to four World Series appearances, winning three.

In 1965, Koufax went 26-8, led the league in complete games, and struck out a career-best 382 batters.  That same year, Drysdale was 23-12, tossed seven shutouts, and posted an ERA of 2.77.  Behind this dominant duo, the Dodgers earned a trip to the World Series, where Koufax famously declined to pitch Game 1 because it fell on Yom Kippur, a Jewish holiday.  Drysdale got the start instead, giving up seven runs in two-and-two-thirds innings.  When Dodgers manager Walter Alston came to the mound to remove him from the game, Drysdale said, “I bet right now you wish I was Jewish, too.”  The Dodgers went on the win the Series in seven games.

Arguably the greatest left-handed pitcher of all time, Koufax was the most dominant pitcher of his era.  And for six years [1961 to 1966] he was perhaps the finest who ever lived.  In 1963, the Left Hand of God posted a league-leading 25 wins with just five losses.  His 1.88 ERA and 0.875 WHIP earned Koufax the league’s Cy Young and MVP Awards. “I can see how he won 25 games,” said Yogi Berra, whose New York Yankees lost to Koufax and the Dodgers in the 1963 World Series, “what I don’t understand is how he lost five.”

The second half of Koufax’ career was simply sensational.  The southpaw led major league baseball in ERA in each of his last five seasons.  He won both the Triple Crown [wins, strikeouts, ERA] and Cy Young Awards in 1963, 1965 and 1966.  A two-time World Series MVP, Koufax led the NL in strikeouts four times and was 97-27 in his final four seasons.  In 1966, Koufax became the first NL pitcher to strike out 300 or more batters in back-to-back years since Rube Waddell accomplished the feat in 1903-1904.

Drysdale was a workhorse.  The 6’5” right-hander, dubbed Big D, pitched more than 300 innings in four straight years between 1962 and 1965.  He led the majors in starts in each of those seasons, and in innings-pitched in two.  Drysdale owned the inside part of the plate.  “I hate all hitters,” said the fierce fireballer.  “I start a game mad and I stay that way until it’s over.”

Featuring a sidearm fastball, Drysdale intimidated hitters.  A master of the brushback pitch – an inside pitch designed to keep a batter off balance – Big D hit 154 batsman in his career, which remains a modern-day record.  “The trick against Drysdale,” said hall of famer Orlando Cepeda, who faced the big right-hander for a decade in the National League, “is to hit him before he hits you.”

Double Dee recorded 200 or more strikeouts in six seasons, and whiffed 196 in one other.  He won the 1962 Cy Young Award after going a league-best 25-9 and compiling a 2.83 ERA.  Drysdale was never more dominant than in 1968, when he tossed a record six consecutive shutouts and 58.2 straight scoreless innings.  Twenty years later, Orel Hershiser – another great Dodger righty – broke Drysdale’s mark when he pitched 59 consecutive innings without allowing a run.  However, Hershiser did not match Big D’s record of six straight complete-game shutouts.

Don Drysdale and Sandy Koufax took part in a famous salary holdout together in the spring of 1966, with both signing contracts just before the start of the season.  They became the first pitchers to earn more than $100,000 a year, marking the beginning of collective bargaining in baseball.  Injuries cut short the careers of both Dodgers Hall of Famers.  Arthritis in his throwing elbow forced Koufax’ retirement at 30, while a chronically sore shoulder led to Drysdale’s departure at 32.  At the time of his retirement in 1969, Big D held the NL record for most seasons with 200 or more strikeouts, with six.

In 1972, Sandy Koufax became the youngest person ever inducted into the Baseball Hall of Fame.  Drysdale followed in 1984.  Randy Johnson, who finished his career first in strikeouts per nine innings pitched [10.67], was enshrined into Cooperstown in 2015, on the first ballot with 97.3 percent of the vote.  Curtis Montague Schilling was a six-time All-Star and three-time World Series champion.  He twice led the big leagues in wins, twice led the NL in strikeouts and tossed the most complete games in the league in four separate seasons.  Only 14 players in major league history have struck out more batters than Schilling, yet he has yet to be elected to the Baseball Hall of Fame.