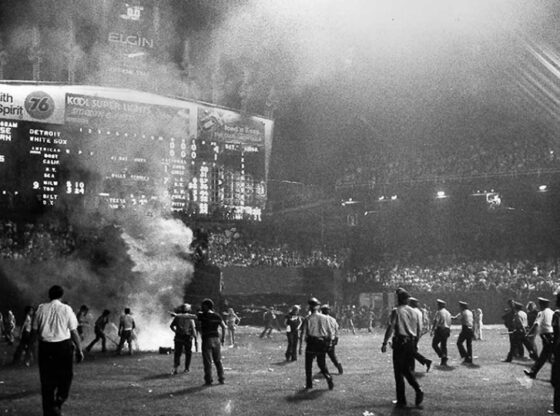 On the South Side of Chicago, on the Thursday night before the 1979 MLB All Star break, disco music was laid to rest.

Disco Demolition Night was an ill-fated baseball promotion that took place at Comiskey Park July 12, 1979.  Seeking to fill seats during a lackluster season, the Chicago White Sox engaged radio disc jockey and anti-disco campaigner, Steve Dahl, to blow up a crate filled with disco records on the field between games of a twi-night doubleheader between the Sox and visiting Detroit Tigers.

One of the most infamous promotions in sports history was the brainchild of three men; Jeff Schwartz, head of promotions at Chicago rock station 97.9 WLUP-FM, Steve Dahl, the station’s most popular DJ, and Mike Veeck, promotions director of the White Sox and son of team owner Bill Veeck.

A baseball pioneer and shameless promotor, Bill Veeck came up with the idea of planting ivy along the outfield walls at Wrigley Field when he worked for the Chicago Cubs in the 1930s.  After purchasing the Sox in 1959, Veeck revamped Comiskey Park, installing showers for fans in the center field bleachers and building an exploding scoreboard.  In 1976, he went so far as to instruct his team to take the field wearing shorts.

Steve Dahl had been fired from WDAI-FM on Christmas Eve 1978, when the station switched to an all-disco format.  Three months later, he landed at WLUP – The Loop – where the 24-year-old Dahl launched a crusade called Disco Dystrophy.  Dahl’s followers, known as the Insane Coho Lips, were die-hard rockers who feared their music was going to disappear and be taken over by disco, so they rose up against it.  Disco Demolition Night was an event aimed at stopping disco once and for all.

The idea for the promo was simple.  WLUP was 97.9 FM, so attendees would be admitted for 98 cents if they brought a disco record.  Between games, Dahl would destroy the collected vinyl in an explosion on the field.

Dahl feared that the promotion would be a failure.  The previous night’s game drew 15,520 and the White Sox were expecting 20,000 for the doubleheader.  Comiskey Park had a capacity of 45,000.  Mike Veeck hired enough security for 35,000.

The 1979 White Sox, who were 40-46 heading into the double-tilt against the Tigers, may have sucked more than disco.  Arriving in Dodge Darts and Chevy Novas, the Insane Coho Lips descended upon Comiskey with banners scrawled with “Disco Sucks.”  Once inside, they drank Schlitz, and lots of it — a Schlitzload.

To discourage late-arriving fans, the Chicago police department closed expressway exits to Comiskey Park.  When the gates were finally shut, hundreds of undaunted Cohos scaled the ballpark’s walls and entered through port holes.

At least 55,000 patrons packed Comiskey Park, with another 20,000 milling about outside.  Most had come to see the explosion rather than the games.  Many of the records were not collected by staff and were hurled like Frisbees from the stands.

The Tigers won the first game, 4-1, in a lackluster affair.  Thirty minutes after it ended, Dahl took to the field in a jeep, decked out in an Army uniform and helmet.  After telling the crowd “we’re gonna blow ‘em up reeeeeeeal gooooood,” Dahl did just that, blasting the crate and its contents into shards in center-field.

While White Sox pitcher Ken Kravec was warming up for the start of game two, thousands of fans stormed the field.  Realizing there was no security, Kravec immediately sprinted to the dugout, while shirtless Cohos climbed the foul poles and ran the base paths.

“All hell broke loose,” said Tigers pitcher Jack Morris, “they charged the field and started tearing up the pitching rubber and dirt.  They took the bases.  They started digging out home plate.”

A bonfire was built in center field.  Despite pleas from White Sox broadcaster Harry Caray and Bill Veeck, fans would not surrender the field for the second game until they were dispersed by riot police.

After 40 minutes of mayhem, the park was littered with debris and filled with smoke.  The playing field was damaged by both the explosion and rowdy fans.

The grounds crew attempted to make the field playable but it was deemed unfit following the melee.  The second game was initially postponed, then was ordered a White Sox forfeit by AL president Lee MacPhail the next day.

While Chicago fans were blowing up disco, the Pittsburgh Pirates were riding Sister Sledge’s We Are Family all the way to the 1979 World Series title.

One of the zaniest promotions in major league history contributed significantly to the decline of the popularity of disco music in America.  By 1982, disco was dead, and the Bee Gees blamed Dahl.

“To this day, Disco Demolition Night stands in infamy as one of the most ill-advised promotions of all time,” said baseball analyst Jeremiah Graves in 2009, “but arguably one of the most successful, as 30 years later we are still talking about it.”

The 1979 White Sox – Tigers contest remains the most recent American League game to be forfeited.

“Beer and baseball go together, they have for years.  But I think those kids were doing other things than beer.”  Detroit Tigers manager Sparky Anderson