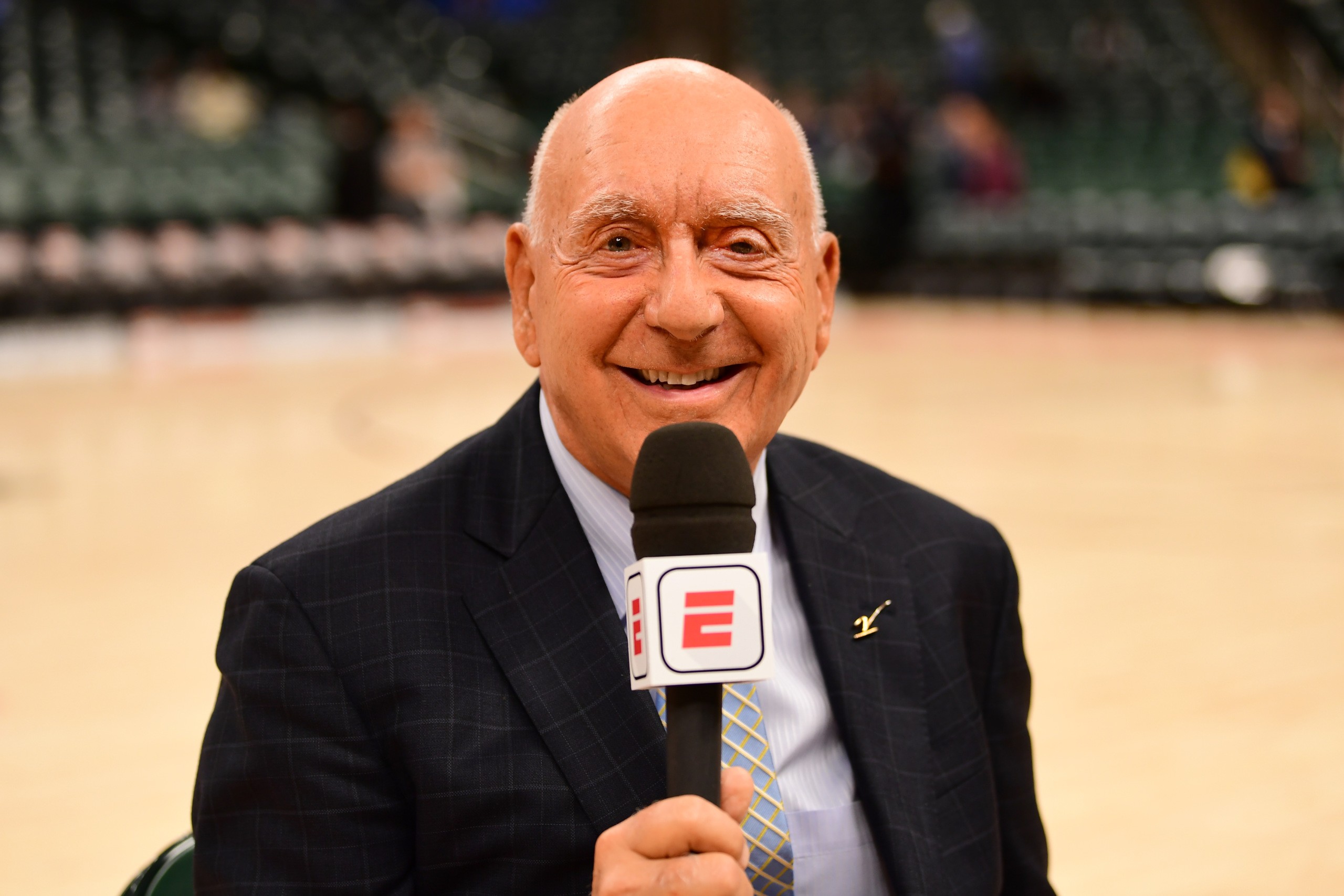 Dick Vitale is the most famous announcer in college basketball history.  He joined ESPN during the 1979-80 season, just three months after the network’s launch in September 1979.  “Dickie V” is never boring.  His passionate, over-the-top style – Awesome, baby! – is distinctive.  Vitale is passionate about college basketball.  He called his first game for ESPN [DePaul over Wisconsin, 90-77, in Chicago] in December 1979, and has broadcast close to a thousand games since.  Vitale has been accused of being “all style, no substance.”  Many believe his analysis lacks critical scrutiny.  The New York Times wrote that Vitale lives in “a hyperbolic parallel universe that amuses his legions, but too often overwhelms his analytical faculties.”  No broadcaster since Howard Cosell has sent more viewers searching for the mute button on their remote control.

In a world full of hairsprayed announcers, Vitale is a factory irregular.  With a non-stop staccato style delivered in a thick Jersey accent, he is a tireless promotor of college basketball, the network, and himself.  Vitale was hugely important to ESPN during its bargain-basement days.  College basketball was the fledgling network’s only decent live sports programming in the early 1980s, and Vitale could pump up a regular season Tuesday night game like it was the national championship.  With a strong need to be liked, his emotion is relentlessly kind and gentle – he praises rather than taunts.  Dickie V is more cheerleader than analyst.  “There will never be a guy that enjoyed it, cultivated it, but at the same time needed it more than Dick,” said longtime friend and former colleague, the late John Saunders.

Before he became Dickie V – the biggest personality in college basketball history – Richard Vitale was a coach.  Like football’s John Madden, he went from the bench to the booth.  Unlike Madden, Vitale was a virtual unknown when he first got behind the microphone.  He credits the great Jim Simpson [one of the most underrated sportcasters of all time], whom Vitale worked alongside in the early 1980s,  with helping him develop his broadcast style.  Vitale has developed his own language.  A Diaper Dandy is a talented freshman, while a superstar is a Rolls-Roycer.  An M & M’er is a mismatch between two players, a ferocious rebounder is an All-Windex Performer and a coach whose team is struggling needs to Get a T.O., Baby!  — particularly if it is Maalox Time [the final minutes of a game].

Born in Passaic, New Jersey, on this date in 1939, Richard John Vitale is the son of factory worker parents.  He grew up in a close-knit, working-class Italian family in Elmwood Park.  “I learned a lot from my mom and dad, who didn’t have a formal education, but had doctorates of love.”  Vitale permanently lost vision in his left eye after a kindergarten accident – with a pencil.  After graduating East Rutherford High School, Vitale earned a bachelor’s degree from Seton Hall University in nearby South Orange.  Following college, he got a job teaching elementary school while coaching junior high football and basketball.  He coached one season at Garfield [NJ] High School before moving to his alma mater, East Rutherford, in 1964.

In seven seasons at East Rutherford, Vitale won four sectional championships, consecutive state titles and 35 games in a row.  In 1971, he joined Rutgers as an assistant.  Two years later, he accepted the head job at the University of Detroit Mercy, alma mater of basketball hall-of-famers Dave DeBusschere, Spencer Haywood and comic Keegan-Michael Key of Key & Peele fame.  Dickie V went 78-30 [.722] in four years at Detroit Mercy.  His 1977 team won a school-record 25 games, beat eventual national champion Marquette, and earned a berth in the NCAA tournament.  After finishing the season ranked 12th in the AP poll, Vitale was named the school’s athletic director.

In just seven years, Dick Vitale went from New Jersey high school coach to head coach of the Detroit Pistons, in 1978.  After guiding the Pistons to a 30-52 mark in his first year, he was fired 12 games into his second season after the team struggled to a 4-8 start.  Less than a month later, he called his first game for ESPN.

A huge baseball fan, Vitale has been a longtime season ticket holder for the Tampa Bay Rays.  In addition to his work as a college basketball analyst for ESPN, Vitale is a contributor to ESPN The Magazine, Mike and Mike on ESPN Radio and has his own website.  Dick Vitale’s Fast Break airs on ESPN during basketball season and his weekly espn.com column is one of the website’s most popular features.

Dickie V is in nine halls of fame.  After being named a finalist in 2004, 2006 and 2007, he was inducted into the Naismith Basketball Hall of Fame, as a contributor in 2008.  The 1989 American Sportscasters’ Association “Sports Personality of the Year” was named “Man of the Year” by the Sons of Italy a decade later.  In 1989, Mr. Vitale received the Curt Gowdy Media Award, the basketball hall of fame’s highest journalistic honor.

The indefatigable Vitale has authored nine books and is a popular public speaker, commanding $ 45,000 per talk.  He has made cameos in movies and television, appearing in Hoop Dreams, He Got Game and The Cosby Show, among several others.  An active fundraiser for cancer research [the Jimmy V Fund is a favorite] and Boys & Girls Clubs, Vitale is especially proud of his daughters, both of whom attended Notre Dame on tennis scholarships and graduated with MBAs.  The family has endowed the Dick Vitale Family Scholarship, presented annually to an Irish undergraduate sports participant who does not already receive financial aid.  The school’s Leprechaun mascot is a past recipient.

“Are you kiddin’ me?  You can’t be serious!  The Daily Dose makes my All-Mark Twain Team!  Such a great writer, Mark Twain.  Such a gentleman, Samuel Longhorn Clemons.  I’ll tell you this, nobody since Mark Twain wrote like the Daily Dose.  Mark Twain was a PTW’er, Baby! Prime Time Writer!