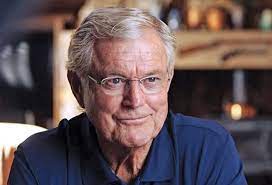 “The best way to kill time is to work it to death.”

One of a handful of coaches to take three franchises to the NFL playoffs, Vermeil was a notorious workaholic who once made a habit of sleeping in his office.  A demanding coach who ran grueling practices he called boot camps, Vermeil also showed an extraordinarily compassionate side.  He demonstrated that there can be crying in football – as he often did when talking about his players during news conferences.  Vermeil cared deeply about his team, often hugging players or inviting them to his home for dinner.  “He loves his players and is dedicated, almost to a fault,” said former Rams linebacker London Fletcher, who played two seasons for Vermeil.

The first to win a Rose Bowl and Super Bowl, Vermeil coached 15 NFL seasons.  He took over the Philadelphia Eagles at 39.  One of the most woeful franchises in the league, Philly had not been to the postseason in nearly two decades.  Vermeil got them there in only his third season.  In 1980 – his fifth year in Philadelphia – Vermeil led the Eagles to a 12-4 record and the first NFC title in franchise history.  Two years later, citing burnout from the toll NFL coaching had taken on him, Vermeil retired for the first time.  “I am physically and mentally drained,” he said that day.  “I just have to get out of coaching for a while.”

For the next decade and a half, Vermeil worked as a TV analyst, first for CBS and then alongside Brent Musburger at ABC.  In 1997, he returned to coaching, taking over the St. Louis Rams.  Like the Eagles, the Rams had been awful.  And just as in Philly, Vermeil got St. Louis to the playoffs in his third year at the helm.

The 1999 St. Louis Rams are one of the greatest rags-to-riches tales in NFL history.  After going a combined 9-23 in the two preceding seasons, the Rams lost their starting quarterback, Trent Green, in the preseason.  Vermeil tapped Kurt Warner, a journeyman from the Arena Football League, to replace Green.  Under Warner, the Rams became The Greatest Show on Turf — the most explosive offense in league history.  St. Louis went 13-3 and won the NFC, making Vermeil only the fourth coach to take two franchises to a Super Bowl.  The Rams beat the Tennessee Titans in the title game, giving the 63-year-old Vermeil, who was named 1999 Coach of the Year, the distinction of being the oldest coach ever to win the Super Bowl [since surpassed by Tom Coughlin].

After sitting out the 2000 season, Vermeil signed with the Kansas City Chiefs in 2001.  As with his previous two stops, Vermeil inherited a team with a losing record, then got them to the playoffs in Year Three.  In 2003, the Chiefs reeled off a franchise-best nine straight wins to open the season, then finished 13-3 to win the AFC West.  Kansas City hosted the Indianapolis Colts in the divisional round of the playoffs.  In only the second game in NFL history without a punt, the Colts outdueled the Chiefs in a shootout, 38-31.  After five seasons in Kansas City, the 69-year-old Vermeil retired from coaching for the last time, on New Year’s Day 2006.

The second of Louis and Alice’s four children, Richard Albert Vermeil was born October 30, 1936, in the heart of Napa Valley wine country —  Calistoga, California.  A four-sport star at Calistoga High School, the “Calistoga Comet” spent two years at Napa Junior College before transferring to San Jose State, where he was a backup quarterback.  After graduating, Vermeil set his sights on coaching, becoming an assistant at Delmar High School in San Jose while pursuing a master’s degree at San Jose State.  Married with children, he dug swimming pools, drove an ice cream truck, and pumped gas to help make ends meet.

“If you don’t invest very much, then defeat doesn’t hurt very much and winning is not very exciting.”

Vermeil landed his first head coaching job in 1960, leading Hillside High School to a league title while being named Coach of the Year.  After taking Napa Junior College to a championship in 1964, he was again named Coach of the Year.  Five years later, George Allen made him the NFL’s first special teams coach.  In 1974, the baby-faced Vermeil was named head coach at UCLA.  He went 6-3-2 in his first season in Westwood.  In his second, he guided the Bruins to their first Pac-8 championship in a decade and a record of 8-2-1.  After beating archrival USC for the Victory Bell to end the 1975 season, UCLA faced undefeated and top-ranked Ohio State in the Rose Bowl.  In Archie Griffin’s final game as a Buckeye, UCLA held the two-time Heisman Trophy winner in check and stunned OSU, 23-10.

One month after winning the Rose Bowl, Eagles owner Leonard Tose signed Vermeil to a five-year contract.  Philadelphia had not been in a playoff game since 1960, and a series of bad trades left the moribund franchise without a first or second round draft pick until 1979.  He found Vince Papale, subject of the 2006 movie Invincible [Vermeil was played by Greg Kinnear in the film], who became a brilliant special teams performer.  The indefatigable Vermeil drafted running back Wilbert Montgomery, traded for quarterback Ron Jaworski, and built the Eagles into winners.

In the late 1800s, Vermeil’s great grandfathers – Garibaldi Iaccheri and Jean Louis Vermeil – emigrated to the U.S. and settled in San Francisco.  The family purchased land in Calistoga, a tiny town 75 miles north of the city, and began making wine.  Dick Vermeil has a passion for two things in life – football and wine.  He inherited his ancestors’ relentless work ethic and quest for perfection and, in 1999, launched Vermeil Wines.  Partnering with winemaker Paul Smith, their first release was Jean Louis Vermeil Cabernet Sauvignon.  Sourcing fruit from Frediani Vineyards in Calistoga, Vermeil Wines makes 11 different wines that are some of the best examples of their varietals.

“No one ever drowned in sweat.”