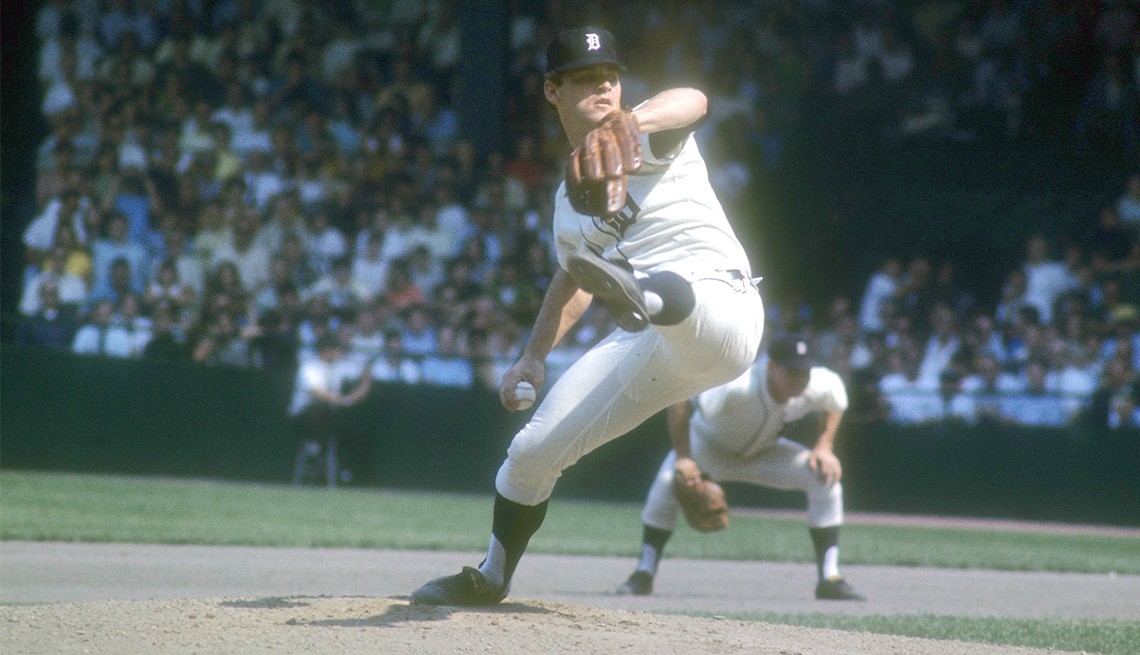 The last pitcher in major league history to win 30 games in a season turns 72 tomorrow.

Dennis Dale McLain was born in Markham, Illinois, March 29–the same date as Cy Young [Daily Dose, March 17] in 1944.  He is the older of two boys born to Tom and Betty McLain,  Irish Catholics from Chicago’s south side, who married at 18.  Tom, who had been a star shortstop in high school, inspired Denny to play baseball and play electric organ, and he excelled in both.  McLain earned a baseball scholarship to Mount Carmel High School, alma mater of football’s Donovan McNabb and hockey’s Chris Chelios, in 1958.  His father died the following year and Betty McLain quickly remarried, leaving Denny to do whatever he wanted.  McLain went 38-7 at Mount Carmel, teaming with catcher Mike Blake—a future member of the football and basketball Halls of Fame in Indiana—to lead the Caravan to Chicago Catholic League titles his junior and senior seasons.  Following graduation in 1962, McLain signed a $ 17,000 contract with the Chicago White Sox before reporting to the Harlem [TN] Smokies of the Class D Appalachian League and tossing a no-hitter against the Salem Rebels in his first pro start.  He was claimed on first-year waivers by the Detroit Tigers the following spring and, following the 1963 season, eloped to New Buffalo, Michigan with Sharyn Boudreau, daughter of Cubs’ broadcaster and MLB Hall of Famer Lou Boudreau.  After going 4-5 for the Tigers in 1964, McLain added a curveball and changeup to his outstanding fastball.  In 1965, he went 16-6 with a 2.61 ERA.  One year later, he posted his first 20-win season.

1968 was the “Year of the Pitcher” in Major League Baseball.  Bob Gibson posted a record-low ERA of 1.12, Don Drysdale pitched six consecutive shutouts, and Luis Tiant—“El Tiante”– allowed a batting average of 1.68, the lowest in big league history.  The most impressive performance of the year was turned in by Denny McLain, who went 31-6 while becoming the first pitcher to reach the 30-win milestone since Dizzy Dean in 1934.  McLain struck out 280 hitters while allowing only 63 walks.  He posted an ERA of 1.96 and pitched 336 innings.  In 2015, six of the best pitchers in MLB each threw exactly four complete games.  In 1968, Denny McLain completed 28 games in 41 starts.  McLain was 16-2 at the All-Star break and won his 30th game on September 14 against the Oakland Athletics.  That night, Reggie Jackson homered twice to put Oakland up, 4-3, heading into the bottom of the ninth. McLain was lifted for pinch-hitter Al Kaline, who walked and scored the tying run on an infield error.  After “Wonderful” Willie Horton hit a walk-off homer, McLain became the 11th pitcher of the 20th Century to win 30 games in a season.  Despite going 1-2 in three World Series starts, Detroit won the championship, and the 24-year-old McLain was named regular season MVP and winner of the 1968 Cy Young Award.  Following the Series, he accepted a gig playing organ at a Las Vegas hotel.  In 1969, McLain went 24-9 and shared the Cy Young Award with Baltimore Orioles left-hander Mike Cuellar.  The following year, McLain was suspended three times; for illegal bookmaking, dousing two sportswriters with water, and carrying a gun on a team flight.  He was traded to the Washington Senators and, after going 10-22, went from leading MLB in wins to leading in losses in just two years.  By 1973, McLain had lost his fastball and his desire, retiring with a career record of 131-91.

Denny McLain was brash and outspoken, often creating controversy by criticizing teammates and fans.  Former Tigers teammate Jim Northrup called him “the original flim-flam man.”  His stellar performance at the start of his baseball career was a marked contrast to his personal life.  In 1968, McLain signed the first $ 100,000 contract in Tigers’ history.  Two years later, he filed for bankruptcy.  In the mid-1980s, he spent 27 months in prison on federal racketeering charges involving gambling and cocaine.  A decade later, McLain returned to prison after looting a company’s pension fund.  Tigers

All-Star catcher Bill Freehan said, “The rules for Denny just don’t seem to be the same as for the rest of us.”  During his playing days, the 185-pound right-hander consumed a case of Pepsi every day, a habit that added ten pounds a year to his 6’1” frame. McLain’s weight ballooned from 185 to 330 pounds and, in 2013, he underwent bariatric surgery, resulting in a weight loss of over 165 pounds.  Dennis Dale McLain pitched ten years in the major leagues.  He played in three All-Star Games, earned two Cy Young Awards and won 92 games between 1966 and 1969.  Mr. McLain is the author of two books, Nobody’s Perfect and I Told You I Wasn’t Perfect.”

“Sinatra doesn’t give a damn about anything, and neither do I.”– Denny McLain, speaking of his idol, Frank Sinatra