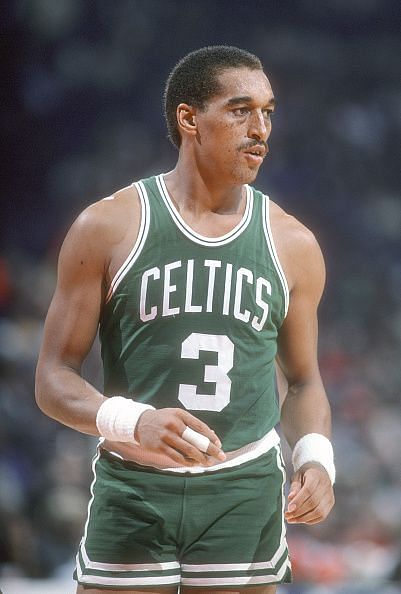 Dennis Johnson may be the most underrated player in NBA history.

In the final moments of games that mattered most, Johnson always rose to the occasion.  The bigger the stage, the better he was.  “I hate to lose.  I accept it when it comes, but I still hate it,” said the five-time All-Star.  “That’s the way I am.”  In 14 professional seasons, DJ made six trips to the NBA Finals, winning three.  His first came with Seattle in 1979, when he was named Finals MVP.

Johnson entered the league as a shooting guard, playing four seasons in Seattle and three with the Phoenix Suns.  After being traded to Boston in 1983, he moved to point guard and led the Celtics to the NBA Finals in each of his first four seasons in Beantown.  DJ was versatile.  He could post up, lead the fast break, hit from the outside, and pass with the best of the league’s playmakers.

But his specialty was defense.  Magic Johnson called DJ the best backcourt defender of all time.  He made the All-Defensive Team nine times, and was named First Team from 1979 to 1983.  George Gervin said Johnson was the hardest defender he ever played against.  Possessing quick hands and sure feet, Johnson was the top defensive guard of Celtics teams that won world championships in 1984 and 1986.  Larry Bird played with four Hall of Famers during his brilliant 13-year career.  Not known for tossing compliments around lightly, Larry Legend called DJ the best teammate he ever had.

Johnson teamed with Bird on one of the greatest plays in postseason history.  About to lose Game 5 at home and go down 3-2 in the 1987 Eastern Conference Finals against Detroit, Bird stole an Isiah Thomas inbounds pass under Boston’s basket and fed Johnson, who drove in for the winning layup.  The Celtics won the series in seven games.

“He was one of the most underrated players in the history of the game, in my opinion, and one of the great Celtic acquisitions of all time,” said former Boston teammate Danny Ainge, now the Celtics’ president of basketball operations.  A free spirit with a fun personality, Johnson loved to laugh and play the game of basketball.  A tenacious defender, capable scorer and clutch shooter, he averaged 14.1 points and five assists per game.  When he retired in 1990, DJ was the 11th player in NBA history to reach 15,000 points and 5,000 assists in a career.

Born September 18, 1954,  Dennis Wayne Johnson was the eighth of 16 children born to a social worker and brick layer who lived in Compton, California.  Cut from his seventh and eighth grade basketball teams, Johnson was only 5’9” by the time he reached his senior year at Dominquez High School.  The 10th or 11th man off the bench, he played sparingly for the Dons, averaging no more than three minutes per game.

Following graduation, DJ got a job driving a forklift for $ 2.75 per hour.  After work, he rode the bus to summer league games with his brothers.  During the summer of 1974, Johnson sprouted to 6’3” and developed great jumping ability.  He caught the eye of Jim White, coach at nearby Harbor Junior College, who offered DJ a scholarship.  Talented, but with a flashpoint temper, Johnson clashed with his coach and was thrown off the team three times during his two years at Harbor.  He led Harbor to a state JUCO title and, despite their conflicts, White helped his promising guard earn a scholarship to Pepperdine.

DJ so impressed Seattle Supersonics GM Bill Russell during his one year at Pepperdine that the Sonics drafted him in the second round of the 1976 NBA draft.  Three years later, the player who couldn’t even start for Dominguez was named NBA Finals MVP.

Part of what made Dennis Johnson such a money player was his durability.  An NBA regular season is 82 games.  DJ played in 75 or more games in 13 of his 14 pro seasons, and 1,100 of a possible 1,148 in his career.  In 1982, Johnson was honored with the Pepperdine Distinguished Alumni Award, and the Celtics retired his Number 3 jersey in 1991.

After retiring as a player, Mr. Johnson worked as an NBA scout and assistant coach.  In 2005, he became head coach of the NBA Development League’s Austin Toros.  Following a Toros practice on February 22, 2007, coach Johnson suffered a heart attack and collapsed at the Austin Convention Center.  He was rushed to a nearby hospital and was later pronounced dead, sending shockwaves through the NBA.  Dennis Johnson was 52, and was survived by his wife of 31 years and three children.

On this date in 1976, Dennis Johnson scored six points as the Seattle Supersonics beat the Detroit Pistons, 106-103.  Playing in only his fourth NBA game, the 22-year-old rookie made two field goals and two free throws.