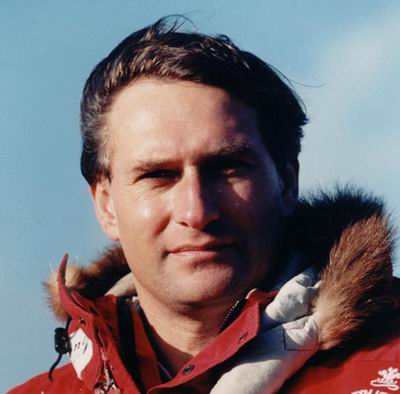 David Hempleman-Adams just may be the most interesting man in the world.

A British industrialist and adventurer, Mr. Hempleman-Adams is the first person in history to complete the Explorer’s Grand Slam by climbing the highest peaks on each of the seven continents—the Seven Summits—and reaching the Geographic and Magnetic North and South Poles.  He has also broken 47 ballooning records, piloted a single-engine Cessna from the north of Canada to the southern tip of South America while covering over 11,000 miles in record time and just completed the Polar Ice Challenge, the most extreme adventure of his career.

Hempleman was born in the Borough of Swindon in South West England on October 10, 1956. Following his parents’ divorce, he moved as young boy to a small village near Bath with his mother. The move set his life on a different trajectory.  “I had been transformed from a boy from a railway town to a country lad,” he recalled.  “I loved getting dirty, working hard and forever being in the fresh country air.  My love affair with adventure followed.”   After his mother remarried, David took  her new last name and became Hempleman-Adams.  At 13, he began climbing Welsh mountains with school groups and was soon hooked.  He attended college in Manchester.  When he wasn’t studying he was climbing.

According to Hempleman-Adams, his five biggest adventures have been:

David Hempleman-Adams has made over 30 Arctic expeditions and has reached the various Poles a record 14 times.  He is the first man to fly a balloon over the North Pole and became the first person to cross the Atlantic in an open wicker basket balloon.  In June 2005, David staged the world’s highest formal dinner party, ascending to 24,262 feet in a hot air balloon to dine on duck a l’orange, asparagus tips and fruit while wearing a tuxedo.  Following the meal, dinner guests Bear Grylls and Alan Veal parachuted the four-and-a-half miles back to land.  He flew a helium balloon from Albuquerque to Madison, Wisconsin—a distance of 1,000 miles—to win the 2008 Gordon Bennett Cup.  Three years later, he won the America’s Challenge Balloon Race while setting a new duration record.  Hempleman-Adams is the only Brit to have won both events.

In 2011, Hempleman-Adams climbed the treacherous north side of Mount Everest [Daily Dose, 8/25/15], one of the few climbers in history to have scaled the world’s highest peak from both sides.  He has received many honors in his homeland, including being named to the Royal Victorian Order, Most Excellent Order of the British Empire, Order of St. John and Deputy Lieutenant of the United Kingdom.

In early summer 2016, Mr. Hempleman-Adams led an expedition known as the Polar Ice Challenge on a 3,000-mile trek around the North Pole without any support.  Using the Northwest Passage, which connects the Atlantic and Pacific Oceans through the Arctic, the journey was a race against time.  The team needed to arrive in late July after the ice had melted, allowing them to get through the passage and go around the North Pole before it froze again.  The Polar Ice Challenge crew successfully completed their return September 12.

The most interesting man in the world celebrates his 60th birthday this coming Monday.