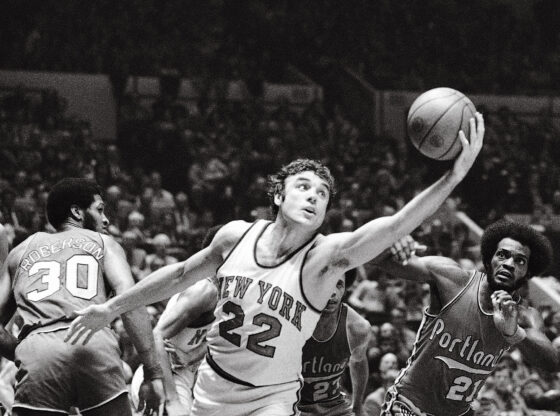 David Albert DeBusschere is a member of the NBA’s 50th Anniversary All-Time Team and is the only one who also pitched in the Major Leagues.

Born in Detroit, Michigan on this date in 1940, he was an outstanding athlete and attended Austin Catholic Preparatory School. The 6’6” right hander pitched the Friars’ baseball team to the City Championship and was also a forward on the basketball team. DeBusschere was selected to the All-State basketball team as a junior and, as a senior, scored 32 points in the 1958 Class A state championship game to lead Austin to the title over Benton Harbor High School. The Tigers’ star player was Chet “The Jet” Walker, who would go on win a championship and play 13 seasons in his NBA Hall of Fame career. Nicknamed “Big D”, which could have stood for defense, determination or Detroit, DeBusschere turned down offers from colleges around the country to stay home and play for the University of Detroit Mercy. He pitched the Titans baseball team into three NCAA Tournaments and led the basketball team to NIT berths in his sophomore and junior years and the school’s first NCAA bid as a senior. DeBusschere averaged 24.8 points and 19.4 rebounds per game in his three-year varsity career at UDM. The Detroit Pistons made him a territorial pick in the 1962 NBA Draft and DeBusschere expressed interest in playing baseball for the Detroit Tigers, but they would not allow him to also play basketball. The Chicago White Sox would, so he signed with them as an amateur free agent for $75,000. The Pistons paid him $ 15,000.

In the summer of 1962,“Big D” began the season with the Savannah White Sox, Chicago’s Class-A affiliate in the South Atlantic League, going 10-1 with an ERA of 2.49. He ended the campaign in Chicago, appearing in 12 games for the White Sox. On October 16, 1962, he made his NBA debut, scoring 16 points in a 122-106 loss to the Los Angeles Lakers. He went on to average 12.7 points and 8.7 rebounds per game in route to being named to the All-Rookie Team. DeBusschere joined the White Sox at the end of the 1963 NBA season and appeared in 24 games, including a six-hit, complete game shutout over the Cleveland Indians on August 13. DeBusschere returned to the Pistons for the 1963-64 campaign but broke his leg and only appeared in 15 games. The following summer he played for the Indianapolis Indians, Chicago’s AAA team, and went 15-8. The Pistons started the 1964-65 season poorly and made DeBusshere player-coach one month into the season. At 24, he was the youngest coach in NBA history and his new duties made playing two professional sports overwhelming. He spent the 1965 baseball season in AAA and retired in September in order to concentrate on his basketball career. Detroit fired him as coach in 1967 and, one year later, made a trade that would change the fortunes of the New York Knicks, sending DeBusschere to the Knickerbockers in exchange for Walt Bellamy and Howard Komives.

DeBusshere joined future Hall of Famers Walt Frazier, Willis Reed and Bill Bradley [Daily Dose, July 28] and blossomed into a rugged rebounder and defensive stopper. Frazier later said, “He was the final piece of the puzzle” and the Knicks beat the Los Angeles Lakers in the 1970 Finals to win the franchise’s first championship. They lost to the Lakers in the 1972 Finals and beat them the following year for their second title in four years. Dave DeBusschere was named to the NBA All-Defensive First Team six straight times and was an eight-time All-Star. He retired following the 1974 season and New York retired his # 22. DeBusschere averaged 16.1 points and 11.0 rebounds per game over the course of his NBA career and was inducted into the Naismith Basketball Hall of Fame in 1983. He became GM of the ABA’s New Jersey Nets in 1974, served as Commissioner of the ABA in 1975-76 and helped facilitate the NBA-ABA merger the following year. DeBusschere became GM of the Knicks in 1982 and famously selected Georgetown center Patrick Ewing [Daily Dose, August 5] with the first pick in the 1985 NBA Draft. He left the Knicks in 1986 to pursue a career with a Manhattan-based real estate firm and died of a heart attack in 2003 at the age of 62.

Dave DeBusschere is one of 12 athletes to have played in both Major League Baseball and the National Basketball Association. He is the only one in either league’s Hall of Fame.