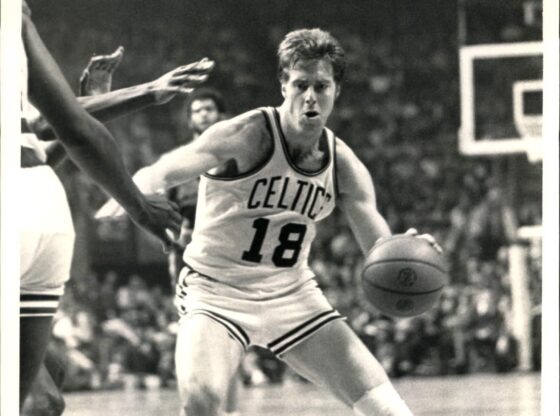 One of the hardest working players in NBA history turns 68 today. Between the Bill Russell and Larry Bird eras, there was Dave Cowens.  The undersized center ran baseline to baseline, set picks and was a crisp passer.  A tenacious defender, Cowens played with great passion.  Dominating at both ends of the floor, his versatility and consistency made him the mainstay of a Celtics team that won two NBA championships in three years between 1974 and 1976.  Like Russell, Cowens was chosen league MVP but was not selected a First-Team All-Star that season.  Like Russell, he served as a player-coach for the Celtics [in 1977-78].  Employing a playing style that never wavered during his 11-year career, [ten of them in Boston] Cowens silenced doubters that thought him too small to play center in the NBA.  Roaming the outside, driving to the hoop or diving across the famed parquet of the Boston Garden for a loose ball, Cowens was the consummate blue-collar player.  “I never thought of myself as a superstar,” Cowens said on the eve of his hall of fame induction in 1991.  “I represent the working class of the NBA.” One of the most solid centers of his era, Dave Cowens helped resurrect the Boston Celtics dynasty in the 1970s.  Playing with all-out intensity all the time, the relentless redhead could score, defend, rebound and run the floor.  Only 6’-9” in a league full of giants, Cowens relied on hustle and heart to lead the Celtics to two NBA titles and make seven All-Star Teams.  Cowens did not possess the flash of Dr. J or Pistol Pete, yet averaged double figures in points and rebounds during his 11-year career.  Possessing a tireless work ethic, energy and determination, Cowens is the NBA’s all-time leader in defensive rebounds per game, and is third — behind Russell and Robert Parish — on the Celtics all-time rebounds list. Born in Newport, Kentucky, on this date in 1948, David William Cowens first played organized basketball at eight.  He attended Newport Central Catholic, a private institution on the Ohio River that looks up at the Cincinnati skyline. Cowens quit the freshman basketball team over a dispute with the coach, and the then-6’1” southpaw turned to swimming and track.  After a five-inch growth spurt between tenth and 11th grade, he decided to give hoops another try, and quickly became a varsity standout.  As a senior, Cowens averaged 13 points and 20 rebounds a game while leading the Thoroughbreds to a 29-3 record.  Snubbed by Adolph Rupp and Kentucky, the redhead chose Florida State University.  Despite the fact the Seminoles had little basketball tradition and were on probation, Cowens headed to Tallahassee in the fall of 1966 — against the advice of his father. Cowens was the centerpiece of Hugh Durham’s first recruiting class at Florida State.  Durham, who had been a high-scoring guard for FSU in the late 1950s, was 29 when he was appointed head man at Florida State.  He later coached Dominique Wilkins {} at Georgia, and is the only head coach to have led two different programs to their first Final Four appearances.  As a sophomore [freshman were ineligible at that time], Cowens led the Seminoles to the NCAA tournament for only the second time in school history.  As a senior, he finished seventh in the nation in rebounding and was named Second Team All-American.  In three seasons in Tallahassee, Cowens averaged 19 points per game and hauled in 1,340 rebounds.  He remains the school’s all-time leading rebounder and is the only player to have his number retired by the Seminoles. Following the retirement of Russell in 1969, the once-proud Celtics won only 34 games the following year.  On the advice of Russell –  the greatest player in franchise history – Celtics GM Red Auerbach rolled the dice and chose a 6’9” center from a mediocre basketball school with the fourth pick of the 1970 NBA Draft, one spot behind Pete Maravich.  After averaging 17 points and 15 rebounds per game, Cowens shared NBA Rookie of the Year honors with Portland’s Geoff Petrie.  In his third season, he averaged better than 20 points and 16 rebounds per game and helped the Celts to a league-best 68-14 record.  That year, Cowens was chosen the NBA MVP as well as MVP of the All-Star Game. Cowens generally made himself a nuisance to Celtics opponents.  As a rookie, he committed a league-leading 350 fouls.  Over the course of his career, the aggressive Cowens fouled out of 90 games, a total that ranks among the top 20 of all time.  In 1977-78, he became one of only five players in NBA history to lead his team in all five major statistical categories [points, rebounds, assists, blocks and steals].   Cowens retired three times.  After winning a second NBA championship in 1976, he called it quits, only to return 30 games into the 1976-77 season.  He retired again in 1980.  When Milwaukee Bucks head coach Don Nelson needed help, Cowens came out of retirement to play one season in Milwaukee for his friend and former Celtics teammate before retiring for good in 1983. When his playing days were over, Mr. Cowens served as head coach of the Charlotte Hornets and Golden State Warriors, going 161-191 in his coaching career.  In 1981, the Celtics retired Cowens’ number 18.  A member of the NBA 50th Anniversary All-Time Team, Cowens has been enshrined into both the College Basketball Hall of Fame and Naismith Memorial Basketball Hall of Fame.