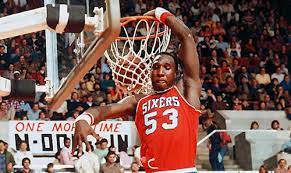 Darryl Dawkins was truly one of a kind.

An incredible talent with an outsized personality, Dawkins played with passion.  His nickname – Chocolate Thunder – was given to him by long-time Sixers fan and Grammy winner Stevie Wonder.  The father of power dunking, Dawkins inspired Shaquille O’Neal and Dwight Howard.  His rim-wrecking, glass-shattering throw-downs were legendary.

Dawkins had fun and played basketball with infectious enthusiasm.  He burst onto the NBA stage as a teenager; a man-child armed with a huge smile and boundless generosity.  By his fourth NBA season – in what would have been his senior college season – Dawkins’ indestructible dunking force reached cult status.

In a game against the Kansas City Kings on November 13, 1979, the 6’11, 250-pound Dawkins dunked the ball with such force that it shattered the backboard.  Shards of glass flew everywhere, forcing Kings forward Bill Robinzine to duck.  Three weeks later, Dawkins did it again, prompting the NBA to initiate a new rule that breaking a backboard was an offense that would result in a fine and suspension.

Chocolate Thunder changed the game, as the NBA went to breakaway rims and shatter-resistant backboards in 1981.

He named other dunks as well: the Rim Wrecker, the Look Out Below, the Go-Rilla and the In-Your-Face-Disgrace.  Others included the Yo-Mama, the Cover Your Head, and the Spine-Chiller Supreme.  Dawkins even had a name for the rare occasions when he went coast to coast: the Greyhound Special.

A unique character with a zest for life, Dawkins created nicknames for himself.  Sir Slam and Dr. Dunkenstein were two favorites.  Before the NBA banned wearing necklaces on the court, Dawkins wore one gold chain with a cross and others that featured Sir Slam and Dr. Dunk in gold script.  Sometimes, Dawkins would take the floor with his shaved head oiled, while wearing an earring.

Dawkins claimed he hailed from the planet Lovetron where, in the offseason, he practiced interplanetary funkmanship with his girlfriend, Juicy Lucy.

As a 6’10” senior sensation at Maynard Evans High School in Orlando, Dawkins averaged 32 points and 21 rebounds while leading Trojans to the to the state championship.  He was heavily recruited by colleges around the country, and narrowed his choices to Florida State, Kansas and Kentucky.

Wanting to help his grandmother, mother and siblings escape poverty, he decided to forgo college.  Three days before the NBA draft, he announced his intention to turn pro.

With the fifth pick of the 1975 NBA draft, the Philadelphia 76ers selected Dawkins, behind David Thompson, David Meyers, Marvin Webster and Alvin Adams.  The first player ever drafted straight out of high school in the first round, he signed a seven year contract worth $ 1 million.

Dawkins averaged double figures in scoring nine times during his 14-year NBA career.  He appeared in three Finals with the Sixers, and was among the league leaders in field goal percentage.  After seven seasons in Philly, Sir Slam was traded to the New Jersey Nets, where he played for five years.

Injuries plagued Darryl Dawkins late in his career, and after brief stints with the Utah Jazz and Detroit Pistons, he played several years in the Italian League.  Dawkins played one season with the Harlem Globetrotters before finishing his career in the Continental Basketball Association.

After retiring as a player in 2000, Dawkins went into coaching.  He served as head coach of the American Basketball Association’s Newark Express, then the USBL’s Pennsylvania ValleyDawgs.  In 2009, Dawkins accepted the head coaching position at Lehigh Carbon Community College.

“Darryl Dawkins is the father of power dunking.  I’m just one of his sons.”  Shaquille O’Neal.

The Whoosh and The Wedge
Sports Siblings