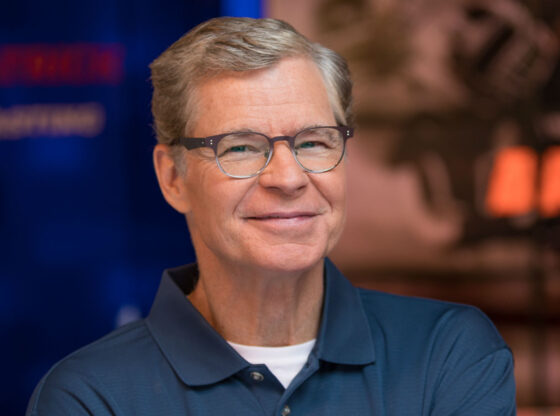 One of the most recognizable faces in the world of sports broadcasting turns 63 today.

Dan Patrick is a sportscaster, radio personality, writer and actor.  From 1989 to 2006, he hosted SportsCenter on ESPN.  A senior writer for Sports Illustrated, Patrick spent ten seasons hosting Football Night in America, the most-watched studio show in television history.  Owning a dry sense of humor and deep, orotund voice he inherited from his grandmother, Patrick hosted over 100 episodes of Sports Jeopardy!, a sports-themed version of Jeopardy! shown on Crackle.

Winner of a 1998 Sports Emmy for Best Studio Host, Patrick is a three-time presenter of the Lombardi Trophy at the Super Bowl.  Named 2000 National Sportscaster of the Year, he has anchored both Summer and Winter Olympic coverage for NBC and received seven Emmy nominations for Outstanding Sports Personality.  While Dan Patrick is America’s most beloved sportscaster, his talents extend well beyond the playing fields.  The witty Ohioan has made numerous cameo appearances in movies, has appeared in music videos with Brad Paisley as well as Hootie & The Blowfish, and was offered to replace Bob Barker as host of The Price Is Right.

“What you see, and what you hear, is the real Dan Patrick,” said former director of ESPN Radio Len Weiner.  “He’s a sincere and down-to-earth midwestern guy who loves talking about sports.”

Born in Zanesville, Ohio, on this date in 1956, Daniel Patrick Pugh is one of six children.  He was raised near Kings Island amusement park in Mason, a one-stoplight town about 30 miles north of Cincinnati.  A sports fanatic, Patrick grew up rooting for the Big Red Machine of the 1970s.  “I read Sports Illustrated cover to cover, cut out all the pictures and put them on my bedroom wall,” said Patrick.  “My father would open it and it was like he was looking through Swiss cheese.  So he kept his subscription and got me my own.”

Patrick played baseball and basketball at William Mason High School.  A slick-shooting guard, he scored 30 or more points four times, including a career-high 36 against Clinton-Massie.  Patrick earned All-Conference honors as a junior and was named Third-Team All-Ohio his senior season.  He attracted interest from the Reds, who wanted to sign the 6’3” right-hander and send him to their rookie league team in Billings, Montana.  Patrick decided against it, opting to play basketball at Eastern Kentucky.

Patrick played sparingly in his first two years at EKU and, seeing that the NBA was not in his future, transferred to the University of Dayton, where his father worked in the computer science department.  He majored in communications and worked at campus radio station WVUD.  Still going by his surname, Dan Pugh, he worked for a few years as a disc jockey, spinning records for two Dayton-area classic rock stations.  In 1983, he was hired as a sports reporter at CNN, where a producer suggested he change his name to Dan Patrick.

After six years at CNN, Patrick joined ESPN.  Beginning in 1992, he worked alongside Keith Olbermann anchoring SportsCenter.  The duo, dubbed the Bards of Bristol by Bob Costas, delivered highlights with fly-by-the-seat-of-your-pants spontaneity, and fans ate it up.  Patrick’s wry catchphrases became instantly quotable.  A homer was Gawn!  A player with a hot hand was En Fuego, and a strikeout became The Whiff.  DP’s material became playground fodder.  Sweet jumpers hit Nothing but the bottom of the net.  Describing a home run: It’s deep and I don’t think it’s playable.  And the most famous of Patrick’s lines, used to describe a dominant performer: You can’t stop him; you can only hope to contain him.

“My goal was to break Keith up and make him laugh,” recalled Patrick.  “He was the same way.  It was our little clubhouse.  We got away with murder.”

Patrick and Olbermann invented an entirely new approach to TV journalism.  No longer were sports anchors just delivering the scores, they became the talent.  “There was an Eddie Haskell feel to it,” said Patrick.  “We’d show up and say, ‘Hello, Mr. and Mrs. Clever.’  You know, say hello to management.  ‘Is Wallace at home?’  And then we’d go upstairs and have some fun.”  Imitators arose.  We got “booyah” for a home run and “As cool as the other side of the pillow” from Stuart Scott.  Soon, the air was let out of the balloon.  “Everyone started doing it and Keith and I didn’t want to do it anymore,” Patrick recalled.

For five years, Patrick and Olbermann were ESPN’s most recognizable faces.  Early on in their partnership, the duo welcomed viewers to their 10 p.m. telecast with, “Welcome to the Big Show.”  Management fumed, insisting they open with, “This is SportsCenter,” the actual name of the program.  They started to over-articulate.  This is SportsCenter became This-s-s-s is SportsCenter.  “As if every time we said it we wanted management to hear it,” said Patrick.  Soon after, ESPN started its This Is SportsCenter ad campaign, and it became one of the most successful in television history.

Olbermann left ESPN in 1997, and the culture at the cable network changed dramatically.  In 2007 — with his contract at ESPN up for renewal — Patrick showed up for work one day and was given a take-it-or-leave-it offer.  “I remember thinking – I’m here 18 years and you give me a take it or leave it,” he recalled.  Patrick left it.  He called his wife, whom he’d met while both were at CNN, and told her, “I just left ESPN.  I quit.”

“No show spends more time on nonsense than us,” says Andrew Perloff, aka “McLovin.”

As legendary as Dan Patrick was on Sportscenter, he may be even better on radio.  From 1999 to 2007, he treated audiences to his baritone purr and unique perspective on the Dan Patrick Show on ESPN Radio.  In July 2007, Patrick announced he was leaving ESPN.  His last broadcast aired August 17 of that year.  Two months later, the then 51-year-old journalist reinvented himself, going out on his own and delivering The Dan Patrick Show from the attic of his home in Connecticut.  The nationally-syndicated program soon found a partner in DirecTV.  The “DP Show,” which started out with 13 affiliates, can now be heard on over 285 radio stations nationwide.  According to Patrick, it is “a TV show about a radio show on TV,” and is seen by over one million viewers weekly.

Influenced by Howard Stern, Patrick incorporates the members of his staff into the show.  He regularly chats with the Danettes – Paulie, Fritzy, Seton and McLovin — on air.  Sometimes they talk about sports but often, not.  Now broadcast from a man-cave studio in a small Connecticut town situated between New York and Boston, Patrick interviews A-Listers from the world of sports.  Often asking humorous hypothetical questions and occasionally making bets with his guests, DP is an astute interviewer.  Non-sports celebrities often appear.  Known for his candor, Patrick delivers with a deft touch.  “We don’t break news,” he is fond of saying, “we sprain news.”  His interviews are irreverent, while the behind-the-scenes Danettes are nothing short of brilliant.

In 1997, Mr. Patrick received the University of Dayton’s Distinguished Alumni Award.  Three years later, he was elected to the Mason High School Athletic Hall of Fame.  A 36-year veteran of the sports journalism world, Patrick now lends his expertise to the Dan Patrick School of Sportscasting at Full Sail University in Winter Park, Florida.  In August 2018, it was announced that Patrick would replace Joe Buck as host of Undeniable, a one-on-one interview show filmed in front of a live audience.  The first of the ten-episode Season 6 aired in January 2019.