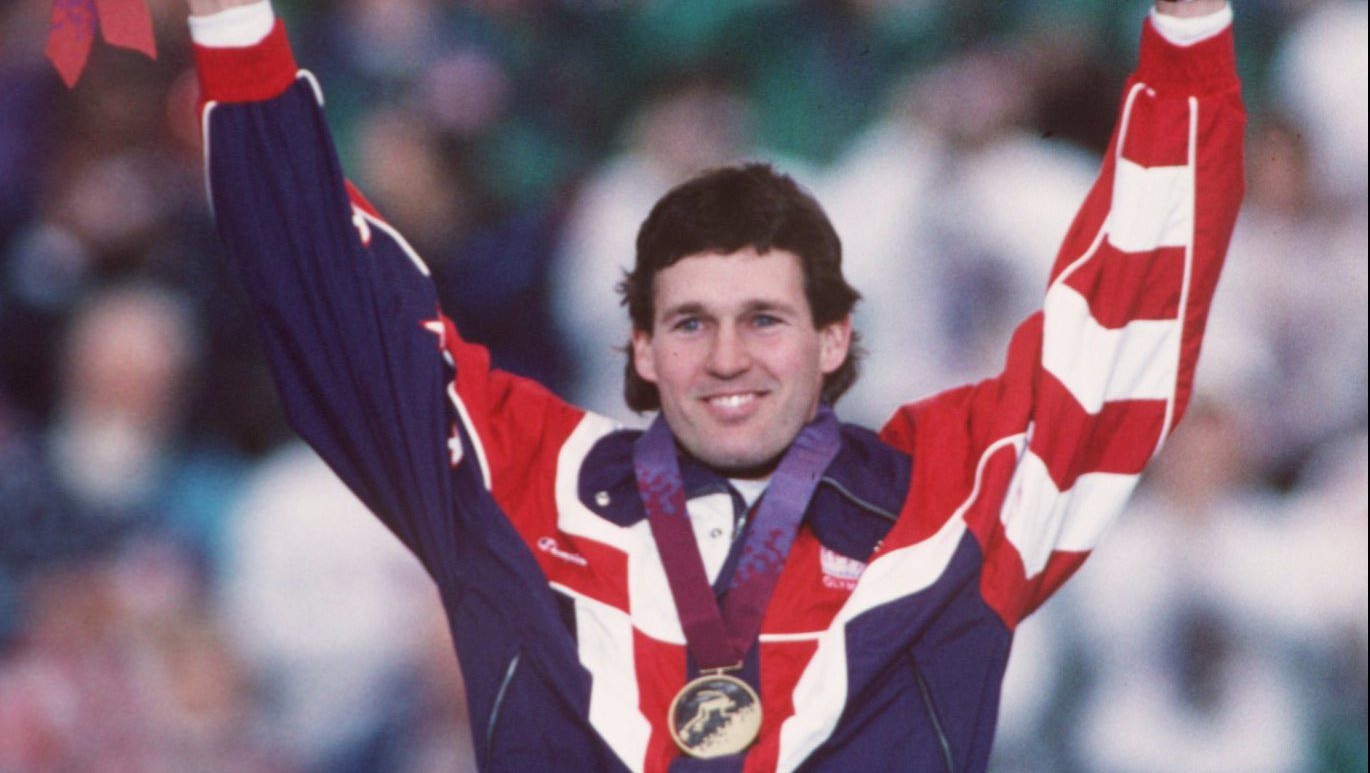 Born in West Allis, Wisconsin, on this date in 1965, Dan Jansen was the last of nine children of a police officer father and mother who was a nurse.  Dan was closest to his sister Jane, who was five years older and, like everyone in the Jansen family, competed in speed skating.  The baby of the family took to skating at four and within four years was winning national age group meets.  Jansen attended West Allis Central High School outside Milwaukee, alma mater of Chris Witty, who won a speed skating gold medal in the 2002 Winter Games in Salt Lake City.  He competed internationally for the first time at the 1982 Junior World Championships in Austria before finishing ninth in Allround at the junior worlds the following year.   Jansen made the 1984 U.S. Olympic Team, where he was the youngest skater in the Sarajevo Games, finishing 16th in the 1,000 and fourth in the 500, only one-sixth of a second from bronze.  “I was 18 and just missed a bronze medal.  I was so excited.  Then I come home and reporters were saying, ‘that’s too bad.’  That’s when I started to feel there’s too much emphasis on medals.”  The following year, Jansen won his first international medal—a bronze—at the 1985 World Sprint Championships.  He topped the World Cup rankings for the first time in 1986 was world champion two  years later, after claiming gold at the 1988 world sprints.

After winning the World Championships in Milwaukee one week before the 1988 Olympics, Dan Jansen was the heavy favorite to win the 500 and 1,000 meter races at the Calgary Games.  On Valentine’s Day, a few hours before taking the ice for the 500 meter competition, he learned of his sister Jane’s passing following a long battle with leukemia.  With the world pulling for him, Jansen slid off the first turn ten seconds into the race and was eliminated.  Three days later, he fell again in the 1,000 and failed to finish.  Crushed, the 23-year old Jansen left the 1988 Winter Games with no medals but was awarded the U.S. Olympic Spirit Award for his valiant efforts.  In January 1992, Jansen broke the world record for 500 meters.  At the Albertville Olympics one month later, he finished fourth at that distance, took 26th place in the 1,000, and again left the Games with no medals.  In 1993, Mr. Jansen became the first speed skater to break the 36-second barrier at 500 meters.  By the time of the Opening Ceremony of the Winter Olympics in 1994, he had done it four times.  No one else had done it once.

Figure skaters Tonya Harding and Nancy Kerrigan dominated the headlines at the 1994 Lillehamer Games, but Dan Jansen showed the world the true spirit of the Olympics.  At 28, he come into the competition figuring it was his last chance for an Olympic medal.  The 6-foot, 190 pound Jansen entered as the reigning World Cup champion and world record holder at 500 meters.  For the second time in his career, he skated in the 500 meter final on Valentine’s Day.  With 200 meters to go, Jansen was on world record pace, but slipped and finished eighth.  Four days later, Jansen faced Igor Zhelezovsky of Belarus—who had won six World Sprint Championships but, like Jansen, had yet to win an Olympic gold—in the 1,000 meters.  The distance was not Jansen’s forte.  Despite being the best or second best sprinter in the world since 1988, he had not won a 1,000 meter event all season, and his chances were considered slim.  In one of the great speed skating performances in history, Jansen went out strong, held on, and took the gold medal in 1:12.43 to set a new world record.  With Strauss’s Viennese Waltz playing in the background, Dan Jansen carried his baby daughter, Jane, during the Lap of Honor at the Hamar Olympic Hall [Daily Dose, April 27].  Following the Games, Mr. Jansen retired from speed skating.

Dan Jansen was one of the finest speed skaters America has ever produced.  Although not as accomplished as the great Eric Heiden [Daily Dose, February 15] or Bonnie Blair [Daily Dose, July 17], he was among the best in the world between 1988 and 1994.  Despite enduring a somewhat tortured Olympic experience, Jansen set eight world records over the course of his 12 year career.  He won seven World Cups, one Olympic gold medal and two World Sprint Championships.  Mr. Jansen received the 1994 James E. Sullivan Award as the top amateur athlete in America and was chosen by his teammates to bear the U.S. flag during the closing ceremony of the 1994 Winter Olympics.  In 1995, Dan Jansen joined Heiden and Blair in the Wisconsin Hall of Fame and, from 2005 to 2007, served as skating coach for the Chicago Blackhawks.  After retiring from skating in 1994, he established the Dan Jansen Foundation in memory of his sister, with the purpose of fighting leukemia.