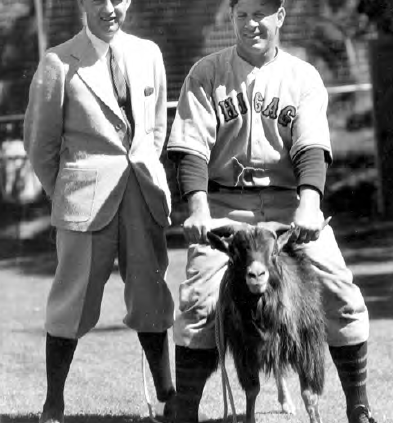 The Chicago Cubs have not played in a World Series since 1945, have lost the last seven that they have participated in and have not won the coveted World Series trophy since 1908.

Many believe it is due to the Curse of the Billy Goat.

The Cubs were playing host to the Detroit Tigers in Game 4 of the 1945 World Series at Wrigley Field and led the Series, two games to one, when saloon owner Billy Sianis decided to attend the game. Sianis, a Greek immigrant, was the owner of the Billy Goat Tavern, an establishment located at 1855 W. Madison Street near Chicago Stadium that he had opened one year earlier. Sianis, a diehard Cubs fan, attempted to bring his pet goat, Murphy, to the game that afternoon. Sianis did not anticipate this being a problem, as there were no signs or warnings that barred animals from the park and he bought a ticket for himself and one for Murphy. One account of the story suggests that Mr. Sianis and his pet watched the game until they were asked to leave several innings in. The request came directly from Cubs’ owner P.K. Wrigley, who asked that both Sianis and his pet be ushered out of the park because the goat’s odor was bothering other fans. Another account states that the goat was turned away at the gate so Sianis left him tied to a stake in the parking lot and went into the game alone. There was mention of a lawsuit that day but no mention of a curse.

An outraged Sianis declared, “Them Cubs, they ain’t gonna win no more” as he exited the ballpark. Billy Sianis later allegedly sent a telegram to Mr. Wrigley which read, “You are going to lose this World Series and you are never going to win another World Series again. You are never going to win a World Series again because you insulted my goat.” Historians differ as to what Sianis meant by his words. Some state that Sianis declared that no World Series games would ever again be played at Wrigley, while others believe that his hex was on the Cubs appearing in the World Series. Whatever the truth, the Cubs lost Game Four, 4-1, and dropped the Series to the Tigers in seven games.

The Cubs’ organization has attempted to “reverse the curse” multiple times. Sam Sianis, nephew of Billy Sianis, was brought out onto Wrigley Field with a goat on Opening Day in 1984 and again in 1989. In both years, the Cubs went on to win their division. He was brought back in 1994 to stop a losing streak and again in 1998 for a Wild Card play-in game, which the Cubbies also won. According to Sam Sianis, the Curse of the Billy Goat can be dispelled only by the Chicago Cubs’ organization showing a sincere fondness for goats, allowing them onto Wrigley Field because they genuinely want to and not for publicity reasons.

William Sianis brought his goat, Murphy, to Wrigley Field for Game 4 of the World Series on this date in 1945.