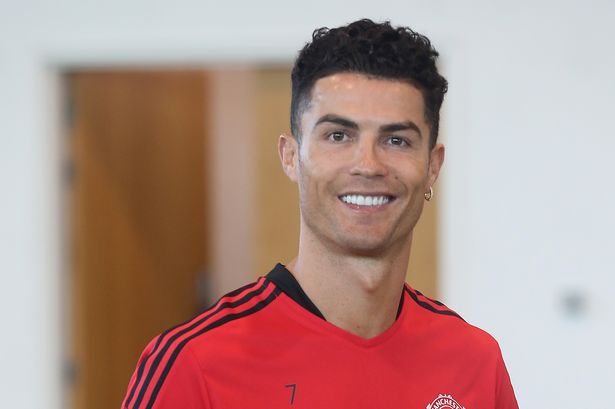 The coveted European Golden Shoe is an award given annually to the top goal scorer in league matches. Cristiano Ronaldo dos Santos Aveiro is the only soccer player in history to win the trophy in two different leagues.

Born in Funchal, the largest city on the Portuguese island of Madeira on February 5, 1985, he was the youngest of four children born to a mother who was a cook and father who was a municipal gardener. His second given name, “Ronaldo”, was chosen after Ronald Reagan, who was his father’s favorite actor. Ronaldo began playing soccer for Andorinha, a neighborhood team in the fifth tier of Portuguese futbol, at 8. His father was team equipment manager. At ten, he signed to play for local club CD Nacional and, two years later, moved to Lisbon to play for Sporting CP, one of the “Tres Grandes” [Big Three] futbol clubs in Portugal. Ronaldo underwent surgery in 1990 to treat an irregular heartbeat and recovered fully. At 16, he became the first player in Sporting’s rich history to play in the under-16, under-17, under-18, B team and first team all in the same season. The teenager made his league debut at the 2002 European Under-17 Championship, scoring two goals in a 3-0 win over Moreirense. Ronaldo came to the attention of Manchester United’s manager, Alex Ferguson, after Sporting defeated United, 3-1, in a match in Lisbon in the summer of 2003 following which Manchester United’s players encouraged Ferguson to sign the talented striker.

Cristiano Ronaldo became the first Portuguese player to join Manchester United when he signed a 5 year, £ 12.24m agreement in 2003. He was given the number 7 shirt previously worn by George Best and David Beckham and scored his first goal on a free kick in a 3-0 win over Portsmouth on November 1, 2003. He went on to be named that season’s Special Young Player of the Year and earned the Bravo Award as best under-21 European footballer. Ronaldo’s breakout season came in 2006-07, as he broke the 20-goal barrier for the first time, recorded his 50th goal in a Red Devil jersey and picked up his first league title with Manchester United. He was rewarded by becoming the first player to win all four main post-season awards [Player of the Year, Young Player of the Year, Fan’s Player of the Year, Footballer of the Year]. The following year, he scored 42 goals in 49 games to win the Golden Boot [Premier League’s top scorer] and European Golden Shoe award, in route to being named Player of the Year for the second consecutive season. Ronaldo underwent ankle surgery in July of 2008 and returned in full form, earning the Balon d’Or as the best futbol player in the world in December. One month later, he became the first Premier League player to be named FIFA World Player of the Year.

In June of 2009, Real Madrid paid £80 million in transfer fees to obtain Cristiano Ronaldo from Manchester United, making him the most expensive footballer in history. He scored on a penalty kick in his La Liga debut and went on to score in his next three games. Ronaldo finished second to Lionel Messi [Daily Dose, June 24] in 2009 FIFA World Player of the Year and Balon d’Or balloting, marking the beginning of the debate over which player was the sport’s greatest. In 2010-11, Ronaldo became the first player in La Liga history to score 40 goals in one season and won his second European Golden Shoe award—the first player ever to win the trophy in two different leagues. In May of 2012, he scored against Mallorca, making Ronaldo the first player ever to score against every team in a single season in La Liga. That year, he won his first league title with Real Madrid and scored 60 goals in all competitions, breaking his own record from the previous season. Ronaldo scored a record 17 goals in the 2013-14 UEFA Champions League season and became the fastest player to score 200 goals in La Liga. He is the only player in the history of futbol to score 50 or more goals in a season for five straight years and is the all-time top goal scorer in Champion League history. Christiano Ronaldo received the FIFA Balon d’Or in 2013 and 2014.

Ronaldo is often ranked as the best player in the world and is considered by some to be the sport’s greatest of all time. “CR7” has played for Portugal in three FIFA World Cup competitions and currently serves as team captain. He and Messi have redefined goal scoring in the sport of soccer. In the pre-Messi/Ronaldo era, 30 goals was considered the pinnacle of success. The pair have made a habit of achieving this by mid-season and have not scored fewer than 30 goals since 2009, averaging more than 50 goals a season for the past five years. The 6’0”, 174 pound winger was won three Balon d’Or and three European Golden Shoe awards during his 12 year career. In 2014, Forbes.com listed Cristiano Ronaldo as the second-highest paid athlete in the world, having earned an estimate $ 80 million that year. Floyd Mayweather was first on the list with an estimated $ 105 million in earnings.