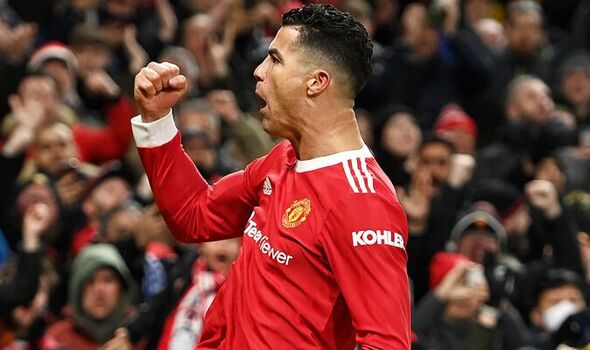 The most famous and highly-paid athlete in the world turns 34 today.

Cristiano Ronaldo has won five Ballon d’Or awards as the best soccer player in the world, the most for a European player and tied with Lionel Messi for most all-time.  He has also finished second five times — four of them to Messi.  Ronaldo is one of the top players in history.  He has scored nearly 700 career goals, more than any other active player [including Messi], and has the most international goals of all time.

A natural leader, Ronaldo – dubbed CR7 in homage to his initials and jersey number — is a superbly conditioned, tireless worker.  Possessing an unparalleled focus, drive and determination, he is, along with Messi, one of the two best players of his generation.  A prolific goal scorer who is best in high-pressure situations, Ronaldo has been atop the soccer world for more than a decade and ranks alongside Pele and Diego Maradona as the greatest player in history.

The only player to reach 30 goals in six consecutive La Liga seasons, Ronaldo holds the record for most goals scored in the top five European leagues.  He is the first player in history to win four European Golden Boot awards as the league’s top goal scorer.  Ronaldo has won 26 championship trophies in his career, including five league titles, five European Cups and one European Championship.  He has also attained 16 titles from friendly competitions.

Born on the Portuguese island of Madeira on this date in 1985, Christiano Ronaldo dos Santos Aveiro is the fourth and youngest child born to a mother who worked as a cook and father who was a municipal gardener.  His second given name, Ronaldo, was chosen after then-U.S. President Ronald Reagan.  The family grew up poor and the children all shared a room.

As a child, Ronaldo played for amateur team Andorinha, where his father was equipment manager, then later spent two seasons with Nacional.  At 12, he moved to Lisbon to attend Sporting CP Youth Academy.  Ronaldo dropped out of school at 14 to focus entirely on soccer, but his career almost ended before it began.  He was diagnosed with tachycardia – a racing heart – and was nearly forced to give up soccer.  In 2000, the 15-year-old underwent a procedure in which a laser was used to cauterize multiple cardiac pathways into one, lowering his resting heart rate.

Ronaldo recovered quickly, and shot through the youth ranks at 16, becoming the first to play for Sporting’s under-16, under-17 and under-18 teams, the B team, and the first team, all within a single season.  A year later, he made his debut in Primeira Liga, Portugal’s top soccer league.

The best Portuguese player of all time signed with Manchester United in 2003, at 18.  After helping United win three straight Premier League titles, a Champions League title and a FIFA Club World Cup, he won his first Ballon d’Or and FIFA World Player of the Year award at 23.

Originally a right winger, the 6’1” Ronaldo developed into an attacking forward.  Although right-footed, the versatile footballer is strong with both feet.  One of the fastest players in the world, he is a brilliant one-on-one player noted for his dribbling and flair.  Ronaldo’s size and strength allow him to retain possession of the ball, often setting up tricks, feints and his trademark step-over moves.

In 2009, CR7 was the centerpiece of the most expensive soccer transfer in history, when he moved from Manchester United to Real Madrid for a €94 million [about $130 million].  In Madrid, Ronaldo won 15 trophies, including two La Liga titles, two Copas del Rey, four Champions League crowns and three FIFA Club World Cups.  Real Madrid’s all-time top goal-scorer finished runner-up for the Ballon d’Or to Messi three times, then won soccer’s most coveted trophy four times in five years from 2013 to 2017.

Ronaldo led Real Madrid to a historic third straight Champions League title in May 2018, becoming the first player in history to win the trophy five times.  He finished as the top scorer of the tournament for the sixth consecutive season, then signed a four-year deal with Italian club Juventus.  The €100 million [$114.5 million] transfer fee was the highest ever for a player over 30 years old and the most ever paid by an Italian club.

The only player to score 50 goals or more in seven consecutive calendar years, Cristiano Ronaldo has been named World Soccer Player of the Year a record five times [to Messi’s four].  A member of the Portuguese national team since 2003, Ronaldo took over captaincy in 2008 and led Portugal to its first-ever major tournament triumph by winning Euro 2016.  One of the most remarkable athletes in the world, in June 2018 he became the oldest player ever to score a hat-trick in a World Cup match.  Later in the tournament, Mr. Ronaldo scored the 85th international goal of his career, surpassing Ferenc Puskas as the top European goal-scorer ever.

One of the most marketable athletes in the world, Ronaldo was ranked the world’s highest-paid sports figure by Forbes in 2016 and 2017.  Along with Michael Jordan and LeBron James, he is one of three to earn a lifetime contract with Nike.  Cristiano Ronaldo – the Rocket – was named the world’s most famous athlete by ESPN in 2016, 2017 and 2018.