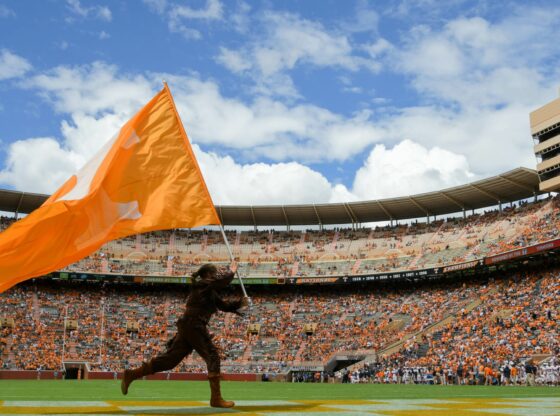 Nothing beats a great rally cry in college sports.  Here are a dozen of our favorites.

Fans of the TCU Horned Frogs warn their opponents to Fear the Frog.

The night before Texas A & M’s 1930 game against TCU, Board of Regents member and 1906 graduate P.L. “Pinkie” Downs pointed his thumb straight up and implored the team to Gig ‘Em Aggies.

In 1926, University of Arizona student body president and quarterback John “Button” Salmon suffered a severe spinal cord injury.  On his deathbed he asked his teammates to Bear Down.  It has been the official school motto since.

The 1907 Iron Bowl game was played in red mud, prompting a Birmingham sports writer to dub Alabama’s football team the Crimson Tide.  Roll Tide has been ‘Bama’s rallying cry since.

In the days of steam-powered locomotives, engine room workers would exclaim “Boiler’s up!” when the coal became hot enough for the engine to run.  During the Joe Tiller era at Purdue, Boiler Up became the mantra for Boilermaker sports teams.

Since the 1920s, Arkansas Razorback fans have implored their teams by Calling the Hogs – Wooooooooooooooo, Pig! Sooie!

Chalk Rock is a type of limestone found in the soil on the campus of the University of Kansas.  In the late 1800s, it became the basis for Rock Chalk, Jayhawk, the famed chant of KU fans.

Named by USA Today in 2015 as the best college football fight song in America, Rocky Top has long been the battle cry for followers of the Tennessee Volunteers.

The phrase Boomer Sooner refers to the Land Run of 1889, in which the land around the University of Oklahoma was settled.  Today, it is the chant of red-and-white clad Sooners fans everywhere.

The Hook ‘em Horns hand gesture is made by extending the index and pinky fingers while grasping the second and third fingers with the thumb.  Established at Texas in 1955, it signifies one of the most recognized rallying cries in college sports.

The battle cry and motto of Auburn University, War Eagle is a term of endearment and/or salutation among the Auburn family.  Nicknamed the Tigers, UA fans shout “We are the Tigers who say ‘War Eagle.’”

Beginning in the late 1980s, fans on one side of Marshall University’s Stadium screamed “We are,” and the other side responded “Marshall!”  We Are Marshall! is a rally cry that inspired the 2006 film of the same name.