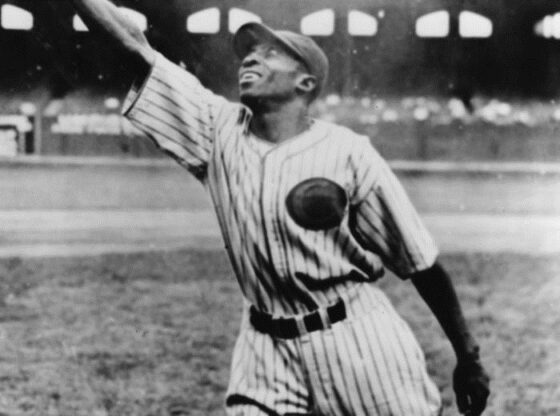 James Thomas Bell may be the fastest man ever to play the game of baseball.

Born in Starkville—anchor of northeast Mississippi’s Golden Triangle—on this date in 1903, he was the fourth of Jonas Bell and Mary Nichols’ seven children.  Raised in nearby Oktoc, James was not interested in following in his parents’ footsteps and sharecropping, preferring instead to play baseball.  After working in a creamery grading cotton at what is now Mississippi State University, Bell moved to St. Louis at 17, where he lived with a brother, intending on going to night school.  The latter never materialized, as Bell spent most of his time playing baseball.  In 1922, he joined the St. Louis Stars of the Negro National League [NNL] as a pitcher.  A lefty, Bell featured a knuckleball, curve and screwball that he threw from three different arm angles.  In his first season, the 19 year old struck out the league’s best hitter, Oscar Charleston, to win a close game.  His calm demeanor on the mound earned him the nickname “Cool Papa.”  By 1924, Bell had been moved to centerfield to take advantage of his speed and quickness.  Bill Veeck, owner of the Cleveland Indians, ranked Cool Papa Bell alongside Willie Mays [Daily Dose, August 17] and Joe DiMaggio as the greatest centerfielder of all time.  The switch-hitting Bell used his blinding speed to lead the Stars to league titles in 1928, 1930 and 1931.  Satchel Paige [Daily Dose, July 7] noted, “One time he hit a line drive right past my ear.  I turned around and saw the ball hit him sliding into second.”

In 1932, Bell joined the Kansas City Monarchs, leading them to the first of three consecutive NNL titles.  He joined the Pittsburgh Crawfords in 1935, joining five future Hall of Famers, including Charleston, Paige and Josh Gibson, and won another three championships.  Cool Papa Bell played in the Mexican League with Petrucho Cepeda, father of future big-leaguer Orlando Cepeda, and Luis Tiant, Sr.  In 1940, Bell became the first player to win the Triple Crown in Mexico.  Of his 12 home runs that season, eight were of the inside-the-park variety.  Bell’s speed allowed him to play a shallow centerfield, as he could track down anything hit his way.  He had great bat control and bunting capability and often beat out tappers back to the pitcher.  On the bases, Bell was a menace, advancing two bases on a bunt or scoring from second on a sacrifice fly.  He once scored from first on a sacrifice bunt.  Gibson roomed with Bell, insisting, “Cool Papa was so fast he could flip the light switch and be in bed before the room got dark.”  Bell’s career statistics are difficult to document because the Negro Leagues were not diligent about recording them.  “I remember one time I got five hits and stole five bases, but none of it was written down because they forgot to bring the scorebook to the game that day.”  Bell was always a threat to score.  If he got on first, he’d steal second, then third, and score on any ball that was put into play.  In the 1930s and 1940s, black all-star teams would play white all-star teams while barnstorming around the country.  In those games, Bell hit .391 against Hall of Fame pitchers Bob Feller [Daily Dose, November 3], Bob Lemon and Dizzy Dean.  He also averaged one stolen base every two games.

Cool Papa Bell played 25 seasons, but never got a chance to show what he could do in the major leagues.  He retired in 1946, one season before Jackie Robinson [Daily Dose, April 15] broke the color barrier.  By 1960, all MLB teams had been integrated.  He played on three of the greatest Negro League teams in history, winning nine championships.  Mr. Bell played 21 seasons of winter ball in Cuba, Mexico and California.  Late in his career, he was a player-manager, mentoring future Hall of Famers Jackie Robinson, Ernie Banks and Lou Brock [Daily Dose, December 24].  Never considered a slugger, Bell once hit three home runs in a Cuban League game in 1929.  He retired with a career batting average of .337 and never hit below .300 in any of his 25 seasons.  Satchel Paige said, “If Cool Papa had known about colleges, or if colleges had known about Cool Papa, Jesse Owens would have looked like he was walking.”  Born at least ten years too early to play MLB, Mr. Bell was never bitter.  “I don’t have any regrets about not playing in the majors.  They say I was born too soon.  I say the doors opened too late.”  Bell played in eight all-star games and had a career OPS of .783.  Following his retirement, Cool Papa lived in St. Louis, where he occasionally took in a Cardinals game, sitting unrecognized in the Busch Stadium Crowd.  He died in March 1991 at age 87, just weeks after the passing of Clarabelle, his wife of 61 years.  In 2002, a statue of Cool Papa Bell was dedicated just outside Gate 4 at Busch Stadium.  Mr. Bell was named to baseball’s All-Century Team in 1999 and in 1974 became the fifth Negro League player inducted into the baseball Hall of Fame.

“Cool Papa Bell was an even better man off the field than he was on it.  He was honest.  He was kind.  He was a clean liver.”– Former teammate Ted Page