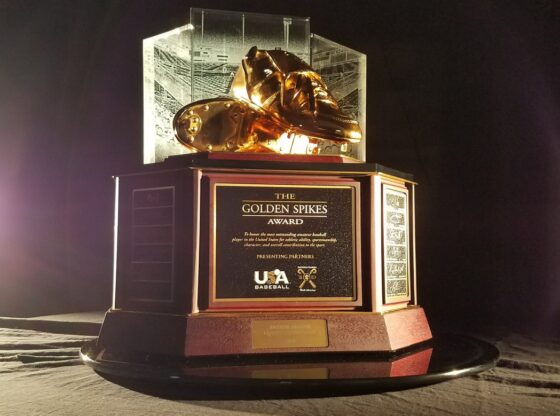 Today we discuss some of the lessor-known awards in collegiate athletics.

The Heisman Trophy is awarded annually to the best player in college football.  The sport’s’ most well-recognized prize is awarded in December, when the award is presented on live television in prime time.  The hype begins long before the start of the season and continues to the beginning of bowl season.  The Naismith College Player of the Year is awarded each year to the top male and female college basketball players, with the winner announced at that year’s Final Four.  The following are the equivalents you may have never heard about.

Fred Haskins was a mentor to young golfers for over three decades.  On the recommendation of Bobby Jones, he became the head pro at the Country Club of Columbus [Georgia], where he taught for 34 years.  Mr. Haskins’ pupils went on the win over 150 championships.  He created an enduring legacy in golf.   Formed in 1971, the Haskins Commission is devoted to amateur golf and the presentation of the Haskins Award, given annually to honor the most outstanding college golfer in the United States.  The 14-member Haskins Commission administers the award, and voting is conducted by college golfers, coaches and members of the golf media.  First awarded to Ben Crenshaw in 1971, the Haskins is college golf’s most coveted individual honor.  Crenshaw and Phil Mickelson both won the award a record three times, while other past winners include Tiger Woods [Stanford, 1996], David Duval [Georgia Tech, 1993], and Curtis Strange [Wake Forest, 1974].  Haskins recipients have gone on to compete in 42 Ryder Cups, win 28 major championships and capture over 250 PGA Tour events.  The University of Texas and Oklahoma State have each produced seven Haskins Award recipients, the most of any school.

One of the greatest hockey players of his era, Hobey Baker played collegiately at Princeton before serving as a fighter pilot in World War I.  Established in 1981 and originally presented by the now-defunct Decathlon Athletic Club in Bloomington, Minnesota, the Hobey Baker Award is presented annually to the top player in NCAA hockey.  The trophy has been awarded to Minnesota-born players nine times, more than any other state, and the University of Minnesota-Duluth has produced the most winners [5].  Harvard’s Scott and Mark Fusco are the only siblings to each win the Hobey Baker, while Chris Drury – the hero of the Trumbull, Connecticut, team that won the 1989 Little League World Series — garnered the trophy in 1998.  Blake Geoffrion [Wisconsin, 2010] is the first fourth-generation player in NHL history.  His great-grandfather, Howie Morenz, is a charter member of the Hockey Hall of Fame and his grandfather, Bernie “Boom-Boom” Geoffrion, was one of the innovators of the slap shot.  The model for the Hobey Baker trophy is Steve Christoff, who played for the University of Minnesota and the gold medal-winning 1980 U.S. Olympic team before skating in the NHL for five years.  The Hobey Baker Award goes to the college player who “best exhibits strength of character both on and off the ice, contributes to the integrity of the team and displays outstanding skills in all phases of the game.”

The Golden Spikes Award goes to amateur baseball’s best player.  First awarded in 1978 to Arizona State’s Bob Horner, the first overall pick of the MLB draft who went on to win rookie-of-the-year honors, the Golden Spikes is presented by USA Baseball.  Voted on by coaches, media and fans, the initial pool of candidates includes 200 players, with the winner being announced during a live broadcast of ESPN’s Sportscenter in late June.  Although the Golden Spikes can be given to any amateur player, the award has always gone to a college player.  Two junior college players have earned the trophy: Alex Fernandez in 1990 and Bryce Harper in 2010.  The Golden Spikes has never had a two-time winner, and ten recipients have gone into the College Baseball Hall of Fame.  Seven Golden Spikes winners were picked in the top spot of the MLB draft, and five recipients – including Harper, Buster Posey and Kris Bryant – have gone on be named MLB Rookie-of-the-Year.  Jim Abbott, Jered Weaver and Tim Lincecum are the only Golden Spikes winners to pitch no-hitters in the big leagues.

Dan Hodge won three NCAA titles while wrestling for the University of Oklahoma in the mid-1950s.  The “Oklahoma Shooter” – who could crush an apple with one hand – never allowed a takedown in his college career.  A member of a dozen halls of fame, Hodge won a 1959 national Golden Gloves boxing title and was 22-0 as an amateur fighter.  In 1995, Mike Chapman, founder of Wrestling Insider magazine, created the Dan Hodge Award to honor the nation’s best amateur wrestler.  Criteria for the award includes a wrestler’s record, number of pins, domination on the mat, quality of competition, heart and sportsmanship.  North Carolina Tar Heel T. J. Jaworsky was the first Dan Hodge winner.  Cael Sanderson of Iowa State is the only three-time winner [2000, 2001, 2002], while Ben Askren [Missouri, 2006, 2007] and David Taylor [Penn State, 2012, 2014] are the only two-time recipients.  Penn State has produced the most Dan Hodge Award winners, with five, while three Iowa Hawkeye grapplers have been named Hodge recipients.

Since 1999, the Peter J. Cutino Award has been bestowed upon the most outstanding NCAA Division I male and female water polo players.  Named after perhaps the greatest name in U.S. water polo, Peter Cutino served as head coach at UC-Berkeley and the Olympic Club of San Francisco.  In 25 years at Cal, Mr. Cutino compiled a record of 519-172-10 and won eight national titles.  He coached 68 All-Americans and produced five Olympians.  The award is administered by the Olympic Club, America’s oldest athletic club.  Founded in 1860 to support amateur athletics in the Bay Area, the club has a long and distinguished water polo history.  Each Cutino winner receives a brass and walnut trophy, and the original is perpetually on display at the Olympic Club.  Water polo’s most prestigious award is voted on by Division I coaches and is presented at an Olympic Club banquet each June.  The Cutino Award practically resides in California, as every winner but one, male or female, played in the Golden State collegiately.  In 2016, Princeton’s Ashleigh Johnson became the first player from a non-California college to garner the trophy.  Stanford’s Tony Azevedo, the current captain of the U.S. national men’s team, won the award a record four-straight years, while Balazs Erdelyi from the University of the Pacific won it three times between 2011 and 2013.  USC has produced 12 Cutino Award winners, more than any other school.  From 2011 to 2015, the Stanford women’s team produced five straight Cutino winners.