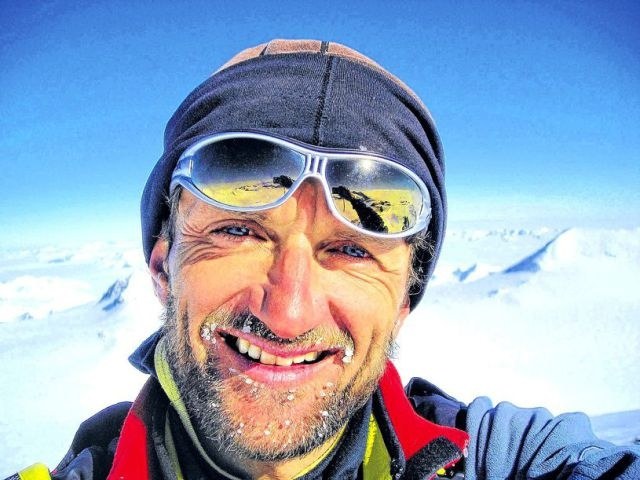 Christian Stangl is the only person in history to ascend the three highest mountains on all seven continents – the Triple Seven Summits.

There are 14 independent mountains on Earth that are more than 8,000 meters [26,247 feet] above sea level. Called the Eight-Thousanders, all are located in the Himalayan and Karakoram ranges in Asia. Their peaks are in the “death zone,” altitudes where the amount of oxygen is insufficient to sustain human life.

In 1985, Bass became the first person to achieve the Seven Summits [the highest point on each continent] while also becoming the oldest person to have climbed Mt. Everest. Bass’s list includes 7,310- foot Mount Kosciuszko as the tallest in Australia, but Italian mountaineer Reinhold Messner instead places Indonesia’s more difficult Carstensz Pyramid [16,024 feet] as the tallest mountain in Oceania, which also includes Australia. Messner made the first ascent of Mount Everest without supplemental oxygen, is the first climber to ascend all 14 Eight-Thousanders, and is the second person to scale his version – the Messner List — of the Seven Summits.

Skyrunning is an extreme form of mountain climbing. It began in the Italian Alps in the early 1990s and has since grown to include more than 30,000 participants worldwide. Governed by the International Skyrunning Federation, whose motto is “Where Earth and Sky Meet,” Skyrunning events are contested on terrain above 6,600 feet where the incline exceeds 30 percent and the climbing difficulty does not exceed 11 degree grade.

Born in Styria — a state in southeast Austria and birthplace of Arnold Schwarzenegger — July 10, 1966, Christian Stangl began climbing in the Alps at 16. As a 21-year-old, he cycled across the Alps in 28 days. Educated as an electrical engineer, he undertook high altitude mountaineering in the Andes and Himalayas in 1990. Five years later, he started speed climbing, a form of mountaineering in which fastest elapsed time is the ultimate goal.

In 1998, Stangl reached his first Eight-Thousander via the southwest face – British route – of China’s Shishapangma, the 14th highest mountain in the world at 26,335 feet. Stangl has become known as “Skyrunner” for his exceptionally fast ascents of high mountains. Peaks of 6,000 meters are known as Six-Thousanders [19, 685 feet]. In 2004, Stangl reached nine Six-Thousanders within 18 days. The following year, he climbed ten Six-Thousanders in a week, then, in 2006, scaled three of them in one day.

Stangl is not only an alpine mountaineer. In 2005, he traversed South America’s Atacama, soloing the 550-mile north-to-south route along the continent’s western coast. In 2011, Stangl cycled from the Indian Ocean to Nepal and climbed Kanchenjunga, the world’s third-highest mountain. “From zero to 8,586 meters [28,170 feet] in 76 days,” he said afterward.

Employing a climbing style he describes as “fast and light,” Stangl completed a solo ascent of Mount Everest, the Earth’s highest mountain, in under 17 hours [16:42] – and without supplemental oxygen – in May 2006. By the end of 2008, he had reached all seven summits in a combined time of 58 hours, 45 minutes while setting speed records for climbing Aconcagua, Elbrus, Mount Vinson and Cartstensz Pyramid – covering the latter in an astonishing 49 minutes! Stangl’s technique amalgamates skyrunning and climbing.

Looking for new challenges, he made it his mission to be the first person to stand atop all 21 of the highest peaks in the world. “After completing the normal seven summits I looked out for something new,” said the Austrian. “I did not want to repeat the 14 Eight Thousanders and over one or two years the idea of the triple seven summits came to my mind.”

The Second Seven Summits are considerably harder than the first seven. Steeper and more dangerous and desolate, several pose the most difficult climbs on Earth. In 2008, Stangl attempted to become the first person to complete seven summits as well as seven second summits. After the death of 11 mountaineers in an avalanche on K2 [2] – the world’s most dangerous mountain – he aborted the exhibition. In February 2009, Stangl negotiated the three highest peaks in Africa – totaling more than 53,250 vertical feet – in one week. Two months shy of his 44th birthday, Stangl summited Mount Logan, the second-highest mountain in North America.

Located in Canada’s Yukon Territory, Logan is over 19,550 high, has a snow cap that reaches nearly 1,000 feet in certain spots and has a median year-round temperature of 17-below zero. In 2012, Mr. Stengl undertook expeditions in Oceania, Antarctica, Europe, and Asia, including finally summiting K2. On January 15, 2013, Stangl reached the top of Sumantri to become the first person to ascend the Seven Second Summits. Located in Oceania near New Guinea, Sumantri is only 46 feet lower than Carstensz Pyramid, located just over one mile to the southwest.

Throughout his quest, Stangl used Google Earth, high-tech equipment, and NASA data to validate heights. Because of measurement and definition issues, he climbed 30 peaks instead of 21 to avoid inaccuracy. After conquering Sumantri January 15, 2013, he climbed Mt. Kosciuszko [part of Bass’s list but not Messner’s] on January 27. The following day, he summited two peaks – Mt. Twynam and Mt. Townsend. The Austrian mountaineer completed his goal August 23, 2013, when he climbed Shkara, a 17,060-foot peak in the Russian frontier, to become the only person in history to ascend the Triple Seven Summits.

Christian Stangls’ exploits have taken him into the Indonesian jungle, icy expanses of Antarctica and rock faces of Patagonia. Proof of his summits has been established by photos, video and GPS log.