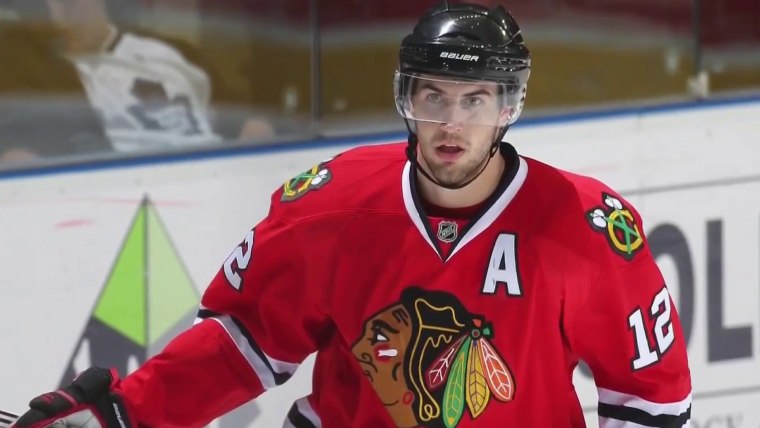 The Chicago Blackhawks not only have the best logo in hockey, they have the finest logo in all of professional sports.

Spelled as Blackhawks since 1986 and known in the Windy City as the Hawks, Chicago’s hockey club is one of the Original Six, the half-dozen franchises that formed the National Hockey League for the quarter century between 1942 and 1967.  In May 1926, former football star Huntington Hardwick was awarded an NHL franchise for Chicago as part of the league’s first wave of expansion into the United States.

One month later, Major Frederick McLaughlin, owner of the wildly popular Manor House Coffee brand, purchased the team from Hardwick for $12,000.  McLaughlin bought players from the Portland Rosebuds of the disbanding Western Hockey League, but did not believe “Rosebuds” a fitting nickname for a his team.

McLaughlin had been a commander with the 333rd Machine Gun Battalion of the 86th Infantry Division during World War I.  This Division was nicknamed the “Blackhawk Division” after Chief Blackhawk, a Native American leader of the Sauk nation.  Blackhawk had sided with the British in the War of 1812 and was a prominent figure in the history of Illinois.  In 1832, he fought against Americans when he brought his tribe across the Mississippi River into Illinois to plant crops and reclaim their land.  He was captured and jailed before being released in 1833.  McLaughlin named his new hockey team in honor of his military unit, spelling it in two words as the Black Hawks.  The club officially became the “Blackhawks” in 1986, when original franchise documents revealed the World War I spelling.

Needing an image to honor the World War I Battalion and Native American chief, Major McLaughlin commissioned his wife, Irene Castle, to design the first logo.  A famous Broadway dancer, Castle’s original effort was a black and white rendering of an Indian chief adorned in braids wearing two feathers on each side of his head.  Mush March was wearing this original logo on his sweater when he scored the winning goal in the second overtime to deliver Chicago its first Stanley Cup in 1934.  Two seasons later, the Hawks added color to the face and hair of the mighty chief.  In 1937-38, the club switched the color scheme, replacing the red face and golden hair with a less-offensive tan and black, respectively. That season, Chicago won its second Cup.  The Indian head changed in 1955 to more closely resemble what it looks like today.  Face paint, more colorful feathers and the secondary shoulder logo were also added.  In 1965 – two seasons before the NHL doubled in size, adding the “Next Six” —  the chief’s face was modified slightly and the outer ring with “Chicago Black Hawks” was removed.  Since then, the most iconic logo in sports has remained unchanged.

Unlike other sports teams that have come under fire for their logos depicting a Native American, the Chicago Blackhawks have avoided controversy.  The University of Illinois, who in 2007 caved to political pressure and abandoned Chief Illiniwek – a fierce and noble warrior who pridefully depicted the Native American people – which was inaccurately accused of being racist.  Miami of Ohio, Marquette, and the University of North Dakota were also unjustly targeted.  The Hawks have not run into that problem, as the logo is not cartoonish and the franchise refrains from chants, tomahawk chops or other amateurish Indian depictions.  Rather, the Blackhawk honors a great Native American chief who stood up to the injustices inflicted upon his people.

If the hockey world handed out three stars for logos, the Blackhawks image would be one, two and three.  One of the most recognizable logos in sports, “The Indian” features a vibrant color combination.  Red, yellow, green and orange feathers, coupled with red and white face paint, sets the logo apart from the rest.  Emblazoned across a red sweater for home games and a white jersey when on the road, the Blackhawks look is crisp, clean and classic.  Accented with red, black and white, Chicago wears the best uniform in sports.

The Hawks have a monopoly on style.  They sport the two best sweaters in hockey [with The Indian across the chest, how could they not be]?  Red or white – take your pick – the jerseys are 1A and 1B as tops in the league.  What’s more, the Blackhawks secondary logo, which first came to life in 1955, is the second best in all of sports.  For over six decades, the team has skated with a “C” – which stands for Chicago – paired with crossed tomahawks on both shoulders.  Save for using different colors, the unique design of the secondary logo has remain unchanged.

“What we usually think of when we talk about good uniform design is you want to keep it to three colors,” said Paul Lucas, publisher of Uni Watch, a blog dedicated to sports uniforms.  “But the Blackhawks have gone with a lot of colors when you include all the colors in the headdress. Somehow, it doesn’t look like overkill.  It totally works.”  What is it that makes Chicago’s uniform so pleasing to the eye?  The answer, according to Lukas, is in the stitching.  The Indian head logo is done with an old-fashioned technique known as chain stitching, giving it a jeweled effect.

It takes more time, costs more money, and is more labor-intensive than newer types of stitching, but the effect is worth the effort.  “It’s very textured, and it really makes the stitching on the jersey crest pop,” Lukas said.  The Blackhawks uniform is made at a Reebok factory in Quebec.  Josee Lemelin, a seamstress from Quebec City, sews the Indian head on every sweater that makes its way into the Hawks’ dressing room.

In addition to their distinctive logo, classic uniform, and storied Original Six tradition, the Chicago Blackhawks have made other significant contributions to making NHL games among the most compelling contests in sport.  In 1973, Hawks owner Bill Wirtz liked the sound of the horn on his yacht and had it installed at Chicago Stadium for the Stanley Cup Final against Montreal.  They have since become a staple of NHL games around the league.  Jim Cornelison, the baritone who sang Back Home Again in Indiana at the 101st running of the Indianapolis 500 in May 2017, performs The Star Spangled Banner before home games at the United Center in Chicago.

Accompanied by organist Frank Pellico, it is quite possibly the finest rendition of our National Anthem anywhere.  Standing on a strip of red carpet on the ice where he is joined by a few military veterans, Cornelison sings over a deafening roar, as the capacity crowd at the UC stands and cheers at the top of their lungs beginning with the first note.  Before Game 2 of the 2010 Stanley Cup Finals, the cheering during the anthem registered 122 decibels, equal to the sound of a chainsaw.

The Hockey News voted the Hawks jersey as the best in the NHL.  In 2017, Greg Wyshynski of Yahoo! Sports listed Chicago’s red home sweaters as the second best jersey in the history of the NHL.  Mr. Wyshynski missed the mark by one.  The Score got it right.  In 2016, it ranked the iconic Blackhawks sweater tops in the league, calling it “The best of the best,” and the logo “colorful and historic.”