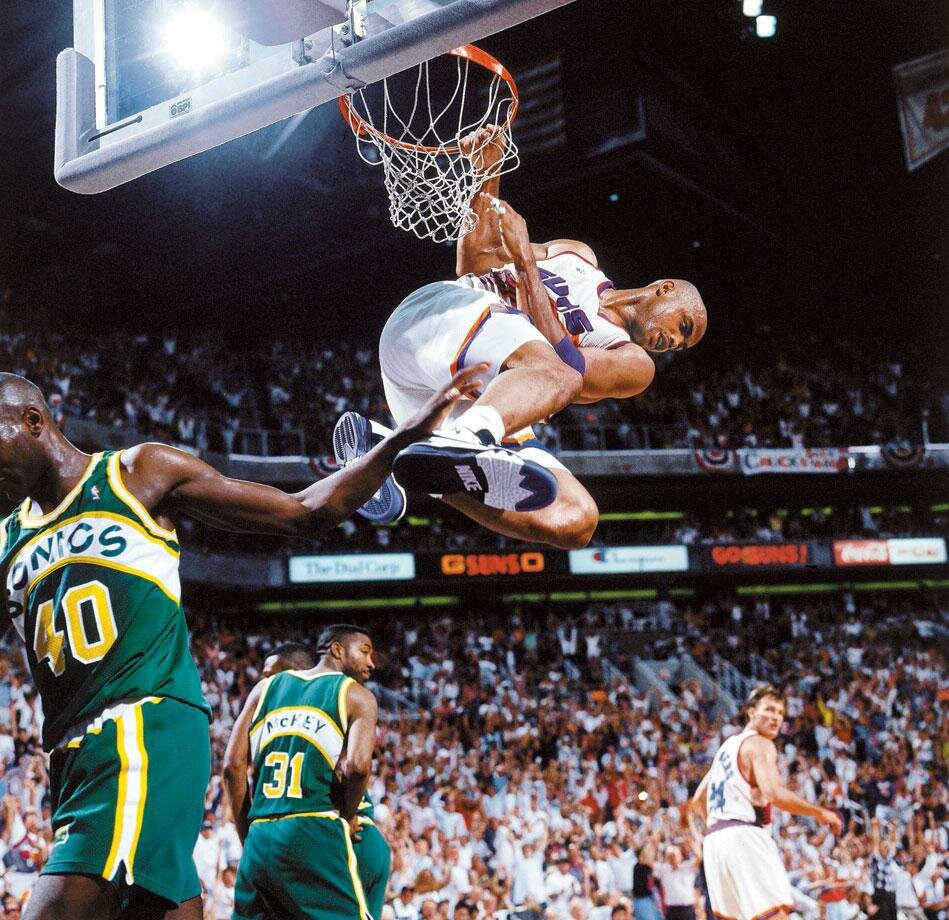 Happy 53rd birthday to The Round Mound of Rebound. Charles Wade Barkley was born in Leeds, Alabama–about 10 miles outside of Birmingham–on February 20, 1963.  Barkley was the first black baby ever delivered in the segregated town hospital where his grandfather worked as a janitor.  Eight months later, four young girls were killed when a bomb exploded beneath the 16th Street Baptist Church in Birmingham, marking a turning point in the Civil Rights Movement of the 1960s.  Barkley attended Leeds High School where, as a 5’10”, 220-pound junior, he failed to make the varsity basketball team.  After growing to 6’4” over the summer, he earned a starting position in his senior year.  Barkley caught the eye of Auburn University coach Sonny Smith during a Christmas tournament that season after scoring 24 points and hauling in 20 rebounds against Bobby Lee Hurt, the most highly recruited player in Alabama and a McDonald’s High School All-American.  “The first four shots that Hurt shot, Charles didn’t block them.  He knocked them up in the stands.  Absolutely knocked them up in the stands and got everyone’s attention.  The next day I was sitting up at his grandmother’s house before the sun came up.”  As a senior, Barkley averaged 19 points and 18 rebounds while leading the Green Wave to a 26-3 record and the state semi-finals. Barkley was listed at 6’6”, 252 pounds when he arrived in Auburn, Alabama, in the late summer of 1981, but he was closer to 6’4”, 300.  Despite struggling to control his weight, he dominated on the basketball court, exciting fans with dunks and blocked shots that seemed unfathomable for a player his size.  Often, Barkley would grab a defensive rebound, dribble the length of the court and finish at the opposite end with a thunderous, two-handed dunk.  In his first three seasons, he led the SEC in rebounding and was named All-Conference.  In 1984, he led Auburn to the NCAA tournament and was named SEC Player of the Year.  Following his junior year, Barkley declared himself eligible for the NBA Draft, leaving as Auburn’s all-time leader in field goal percentage and as the best player in school history. The 1984 NBA Draft is one of the most talent-rich in league history, as five players—including four of the first 16 selected—are currently in the basketball Hall of Fame.   The Philadelphia 76ers picked Charles Barkley with the fifth overall selection, two spots after Michael Jordan, whom the Chicago Bulls took with the third pick of the draft.  Barkley joined Julius Erving and Moses Malone—two of the greatest players in basketball history—and both mentored him on becoming a professional.  Erving taught him the nuances of the game while Malone helped him  manage his weight and properly condition himself to play in the NBA.  Barkley made the All-Rookie team in 1984-85 and, after the departure of Malone in 1987 and Erving the following year, established himself as the Sixers’ team leader.  He led Philadelphia in rebounding and field-goal percentage for seven straight years, was named to the All-Star team six consecutive times and led the Sixers in scoring for six straight seasons, yet Philadelphia failed to advance past the Eastern Conference Finals.  In July 1992, “Sir Charles” was traded to the Phoenix Suns.  In his first season in the desert, Barkley led the Suns to a league-best 62-20 record and the NBA Finals, where they were beaten by Jordan and the Bulls in six games.  Following the 1992-93 season, Barkley was named league MVP.  He remained the Suns’ best player but was slowed by injuries, never returned to the Finals and was traded to the Houston Rockets in 1996, joining Hakeem Olajuwon and Clyde Drexler [Daily Dose, June 22].   After four injury-plagued seasons in Houston, Mr. Barkley retired after the 1999-2000 campaign. Charles Barkley retired as one of four players in NBA history with 20,000 points, 10,000 rebounds and 4,000 assists in their career.  He won two Olympic gold medals, leading Team USA in scoring in both the 1992 and 1996 Summer Games, played in 11 NBA All-Star games and was named MVP of the 1991 contest.  “Sir Charles” was league MVP in 1993 after leading the Phoenix Suns to the NBA Finals, led the league in rebounding in 1986-87 and was named one of the 50 Greatest Players in NBA History in 1996.  He played 16 seasons and was a versatile player who could score, rebound and defend.  Although listed as a power forward, he could play the small forward and center positions, outplaying taller and quicker opponents with his strength and agility.  Hall of Famer Bill Walton stated, “Barkley is like Magic [Johnson] and Larry [Bird] in that they don’t really play a position.  He plays everything: he plays basketball.  There is nobody who does what Barkley does.”  On March 3, 2001 Auburn University retired Charles Barkley’s number 34 jersey.  Later that month, the Philadelphia 76ers also retired his jersey.  Three years later, the Phoenix Suns retired his number 34 jersey while including him in the “Suns Ring of Honor.”  In 2006, Mr. Barkley was inducted into the college basketball and Naismith Memorial Basketball Hall of Fame.  He has released two books, including “I May Be Wrong, But I Doubt It,” and currently works as a studio analyst for NBA games on TNT.

“I don’t create controversies.  They’re there long before I open my mouth.  I just bring them to your attention.”
– Charles Barkley