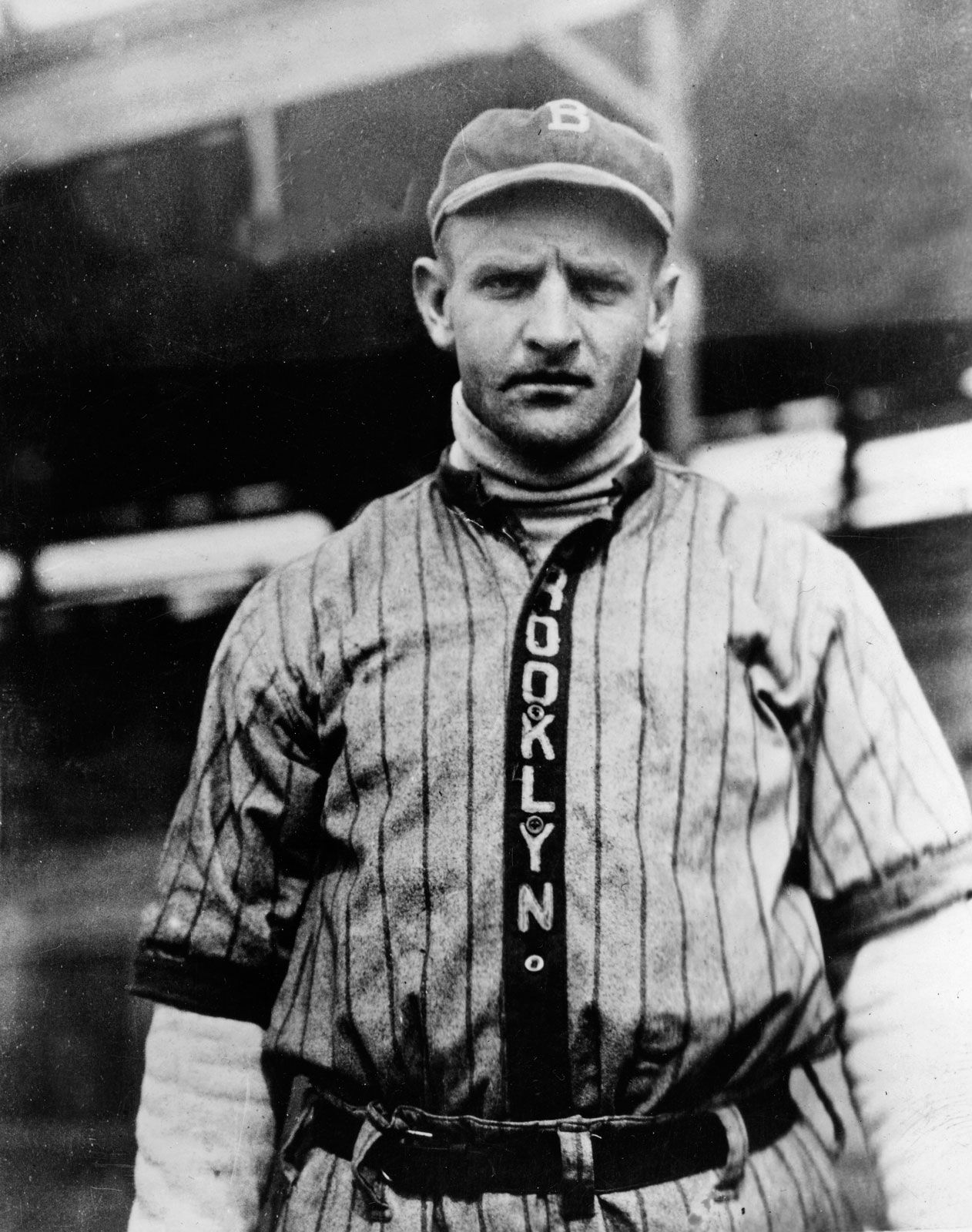 Casey Stengel is the only manager ever to win five straight World Series titles.  He is also the only skipper in baseball history to lose 120 games in a season.

“Managing is getting paid for home runs someone else hits.”

In a baseball career that spanned over half a century, Stengel won two World Series as a player, then claimed ten pennants and seven world championships as a manager.  Following a 12-year playing career, Stengel managed four big league teams over 25 seasons.  One of baseball’s most beloved characters, he possessed a repertoire of odd sayings that came to be known as Stengelese.

Born in Kansas City  July 30, 1890, Charles Dillon Stengel was the youngest of three children born to a father who sold insurance.  He attended Central High School, alma mater of cartoonist Walt Disney, where he led the Eagles to a city basketball title and state baseball championship.  A hard-hitting outfielder, he broke in with the Brooklyn Dodgers in 1912.

“Being with a woman all night never hurt no professional ballplayer.  It’s staying up all night looking for a woman that does him in.”

Dubbed Casey as a tribute to his Kansas City roots, Stengel played for five teams over a dozen big league seasons, including the New York Giants.  Learning at the foot of legendary manager John McGraw, Stengel helped the Giants win World Series titles in 1921 and 1922.  In 1923, he hit an inside-the-park home run to beat the New York Yankees in the opening game of the World Series.  It was the first World Series homer ever hit in Yankee Stadium, which had opened earlier that year.

“I don’t like them fellas that drive in two runs and let in three.”

In 1925, Stengel was hired as player-manager and team president of the minor league Worchester Panthers.  Two years later, he moved to Toledo, where he guided the Mud Hens to a Triple-A pennant.  Days before the opening of spring training in 1934, the Brooklyn Dodgers hired the crusty 43-year-old as manager.  Stengel was fired after two dismal seasons and landed with the Boston Braves, whom he managed for six years.  After a return to the minors, he was hired in 1949 by Yankees owner George Weiss to lead a team loaded with talent.

“The Yankees don’t pay me to win every day, just two out of three.”

Between 1949 and 1953, the Yankees went 487-280 while becoming the only team in history to win five consecutive world championships.  In 1954, they went 103-51 to finish second in the American League.  Led by Mickey Mantle, Joe DiMaggio, Whitey Ford and Yogi Berra, the Bronx Bombers dominated baseball for over a decade.  Stengel’s undoing came in the 1960 World Series, when he inexplicably picked Art Ditmar over Ford – the greatest big-game pitcher of his era — to start Game 1.  The Pittsburgh Pirates knocked Ditmar out of the box in the first inning and won Game 1.  Ford won Games 3 and 6 with shutouts, but could not pitch Game 7, as he might have if Stengel had used him in Games 1 and 5.  After Bill Mazeroski’s walk off homer won Game 7 and the Series for Pittsburgh, Stengel – who was viewed by many as too old and out of touch with the players — was fired.

“The Mets are gonna be amazin’.”

In a dozen seasons in New York, Stengel guided the Yanks to ten pennants and seven World Series titles.  After a year away from baseball, The Old Perfesser — as Stengel had come to be called — returned to the Big Apple.  Now 71, he was hired to manage the expansion 1962 New York Mets.

“We are a much improved ball club.  Now we lose in extra innings.”

Stengel’s colorful personality and instantly-quotable remarks were the perfect fit for the woeful Mets.  The 1962 club was the worst in baseball history, going 40-120.  The New York media loved the grizzled skipper and the Mets did well at the gate, drawing nearly one million fans in their first year in the decrepit Polo Grounds.  The product on the field was another matter, however.  Between 1962 and 1965, Stengel guided the Mets to four straight last-place finishes while losing over 400 games.

“Son, we’d like to keep you around this season but we’re going to try and win a pennant.”

In July 1965, The Old Perfesser fell and broke a hip at a party at Toots Shor’s in Manhattan.  He spent his 75th birthday in the hospital and, recognizing that considerable rehabilitation would be required, stepped aside as Mets manager.  In 1969, the Amazin’ Mets unexpectedly won the World Series.  Stengel threw out the first pitch prior to Game 3 and was presented a championship ring after the Series.  Following his retirement, both the Yankees and Mets retired Mr. Stengel’s number 37.  In 1997, Casey Stengel was selected as manager of Major League Baseball’s All-Time Team by the Baseball Writers’ Association of America.

On this date in 1965, Casey Stengel retired as manager of the New York Mets.  He was elected to the Baseball Hall of Fame the following year.  Stengel moved to California with his wife, Edna, where he died of cancer in 1975 at 85.