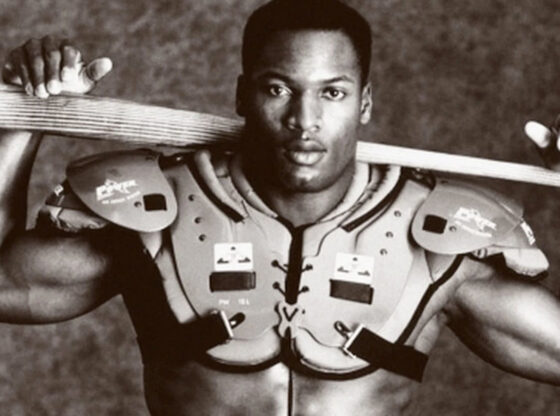 Perhaps the greatest athlete of all time, Bo Jackson is the only man to be named an NFL and MLB All-Star.  The 1985 Heisman Trophy winner played in only 38 NFL games before a hip injury forced his retirement from football. Following hip-replacement surgery in 1992, Bo returned to baseball, belting a pinch-hit home run in his first game back in the major leagues.

Payne Stewart won eleven PGA Tour events, including three majors. Stewart led the Tour in scoring average in 1989, the year he won his first major at the PGA Championship.  His last win came at the 1999 U.S. Open, four months before he died in a plane crash, at 42.

Pelle Lindbergh was a two-time All-Star in his three full seasons with the Philadelphia Flyers.  Winner of the 1985 Vezina Trophy as the NHL’s top goaltender, Lindbergh was killed in an automobile accident eight games into the 1985-86 season.  He was 26.

The greatest and most exciting open-field runner in pro football history, Gale Sayers scored a record six touchdowns in one game and still holds the rookie record of 22 in a single season.  The Kansas Comet scored 39 touchdowns in only 68 NFL games, as knee injuries forced his retirement after five seasons.

An American track legend, Steve Prefontaine once held the national record in seven different distances.  In his four years at Oregon, “Pre” never lost a race at three miles, 5,000 meters, six miles or 10,000 meters.  Part of the running boom of the 1970s, the Eugene Register-Guard called his 1975 death in an auto accident “the end of an era.”

After he was named 2001 college player of the year, the Chicago Cubs selected Mark Prior with the second pick of the MLB draft.  The right-handed fireballer went 18-6 and finished third in Cy Young Award voting as a rookie.  Named to the 2003 All-Star team, Prior was plagued by injuries during his four full major league seasons and never reached his full potential.

Sean Taylor only knew one speed: full speed.  After helping Miami to the 2001 national title, “Meast” – half man, half beast — was selected by the Washington Redskins with the fifth overall pick of the 2004 NFL Draft. The two-time Pro Bowler was in his fourth season with the Redskins when he was shot and killed in his home by an intruder in November 2007.

A 2006 first team All-American and Pac-10 Player of the Year, Brandon Roy was dubbed “The Natural.”  The 2006 NBA Rookie of the Year was a three-time All-Star before persistent knee injuries ended his career after only five full NBA seasons.

In 1965, Tony Conigliaro became the youngest home run champion in American League history.  Three seasons later, he hit his 100th career homer, reaching that milestone faster than any AL player ever had.  In August 1967, “Tony C” was hit in the face by a Jack Hamilton pitch that fractured his left cheekbone, dislocated his jaw and caused severe damage to his left retina.  A year-and-a-half later, Conigliaro made a remarkable return and was named Comeback Player of the Year, but his eyesight had been permanently damaged and he was never the same player.

Hall-of-famer Ronnie Lott said a head-on collision he had with William Andrews in 1982 was the hardest hit he ever received in his legendary NFL career.  After rushing for over 1,000 yards in each of his first four full pro seasons, the Atlanta Falcons’ bruiser sustained a career-ending knee injury in 1984 .  The injury may have cost Andrews a place in Canton.