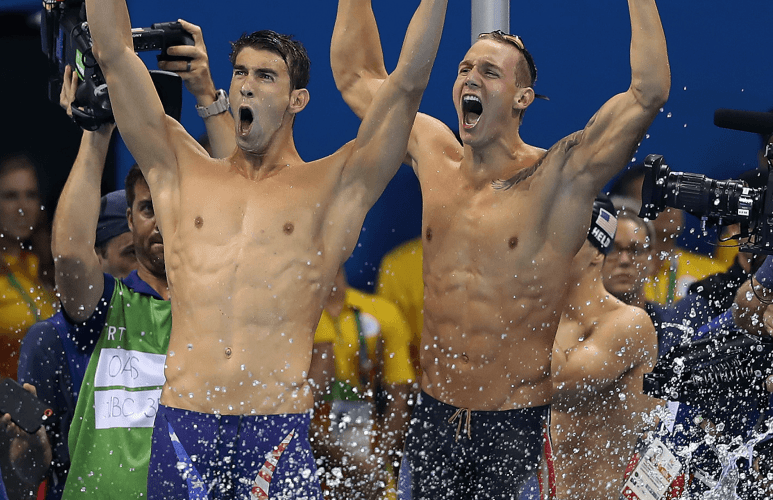 Caeleb Dressel is the greatest college swimmer of all time. An American sprint specialist, Dressel owns seven of the ten fastest times in the history of the 50-yard freestyle.  Swimming for the Florida Gators, he won the NCAA title in the 50 free four straight years.  Dressel holds American long-course records in the 50 and 100-meter freestyle as well as the 50-meter butterfly.  The 2017 USA Swimming Swimmer of the Year, he won seven gold medals at the 2017 World Championships to tie Michael Phelps for most golds at a World Championship meet. Dressel was breaking records before he was a teenager.  A multi-time National Age Group [NAG] record holder, he broke the Boys’ 13-14 NAG record in the 50m freestyle at the 2011 Junior National Championships.  In 2012, the 15-year-old Dressel was the youngest swimmer at the U.S. Olympic Trials.  At the 2012 Winter Nationals, he became the first swimmer under 16 to break 20 seconds in the 50 free.  At the same meet Dressel was so dominant in the 100-yard freestyle that he shattered the 15-16 NAG record that had stood for 22 years. In sports, a Holy Grail is a record that is elusive and seems unattainable.  Joe DiMaggio’s 56-game hitting streak, batting .400 for an entire big league baseball season, or Wayne Gretzky’s scoring 50 goals in 39 games are prime examples.  Prior to the 2018 NCAA Championships in March, no swimmer had ever broken 18 seconds in the 50-yard freestyle.  At the NCAA’s, Dressel led off the 200-yard freestyle relay for Florida with a blistering 17.81 [relay leadoff legs are deemed record-eligible].  He followed that by going 17.63 in the 50 free final, beating Olympic gold medalist Ryan Held by more than a full second. “Unheard of in this event,” marveled swimming expert Steve Swiss.  “18.00 has long been considered the Holy Grail.  It has never been touched, then Caeleb Dressel betters it twice in one meet.”  At the 2017 NCAA Championships, Dressel went 40.00 in the 100-yard free to set the record and match the Holy Grail.  Of the seven times that any swimmer has broken 41 seconds, only twice has it not been Dressel. “American short-course swimming is unique,” continued Swiss.  “It’s quite different from the long-course pool.  The distances are in yards, not meters, like international competitions.  More importantly, short-course involves twice as many turns so the swimmer’s ability to attack the walls is much more important than in long-course.”  At the 2018 SEC Championships, Dressel sat out his best event – the 50 free – in order to compete in the 200 IM.  Three years earlier, Stanford’s David Nolan had become the first to break 1:40 – the event’s Holy Grail — going 1:39.38 at the NCAA Championships.  Despite a mediocre backstroke leg [his weakest stroke], Dressel went 1:38.13, demolishing Nolan’s NCAA and American records by more than a full second.  In the same meet, the Gator senior set the NCAA and American records in the 100 breaststroke in a time of 50.03. A short-course sensation, Dressel also excels in long-course.  The Florida Flash has captured 20 medals – including 12 golds – in international competitions.  In addition to his historic performance at the 2017 World Championships in Budapest, Dressel was part of two gold medal-winning relay teams at the 2016 Rio Olympics.  At the Pan Pacific Championships in August 2018, Dressel celebrated his 22nd birthday by winning five medals, including gold in the 100-meter butterfly.  By the time he left the University of Florida in May 2018, Dressel had set 13 National short-course and four long-course records in seven different events. Born in Green Cove Springs, Florida, August 16, 1996, to Michael and Christina Dressel, Caeleb comes from a family of competitive swimmers.  His father was a four-year letterman at Delaware.  Older brother,Tyler, set Florida state high school records that Caeleb later broke.  Sister, Kaitlyn, set records at Florida State University, and younger sister, Sherridon, is a high school champion who is now an All-American at the University of Florida.

Although he attended and swam for Clay High School in Green Cove Springs, Dressel trained with the Bolles School Sharks in nearby Jacksonville.  Bolles is a swimming powerhouse, having won 40 Florida state high school team titles.  Bolles has sent 59 swimmers to the Olympics.  The school has been represented at each Olympics since 1972 and has collected 19 medals.  If Bolles had been its own country at the 2016 Rio Games, the school would have finished second in the world – behind only the U.S. – in the gold medal count in swimming.  Training under the watchful eye of coach Sergio Lopez, Dressel trained with the Bolles “Dream Team” that broke five national high school records at the 2012 Florida high school state championship meet. The most coveted swimmer in the nation in the class of 2014, Dressel finished his senior season in style.  Swimming for Clay at the Florida 2A state championship meet, he won four state titles while breaking his own national high school record in the 50-yard free.  With seven National Age Group records to his credit, the 6’3” speedster considered Texas, Auburn and Tennessee before choosing the University of Florida. After being named SEC Freshman Swimmer of the Year and First-Team All-SEC, Dressel won the NCAA title in the 50-yard free in his first year in Gainesville.  At the NCAA Championships as a sophomore, he set new pool, American and NCAA records in both the 50 and 100-yard free, while finishing second in the 100 fly.  In 2017, Dressel won a trio of golds at the NCAA’s, defending his titles in the 50 and 100-yard free while setting a new NCAA and U.S. record to win the 100-yard fly. The 2018 NCAA Championships were held March 22-24 at the University of Minnesota, where Caeleb Dressel proved to be the best short-course swimmer ever to take to the water.  On the first full day of competition, Dressel helped Florida to the 200-yard freestyle relay title.  Less than an hour later, he went 17.63 to claim his fourth-straight NCAA title in the 50 free.  The following day – and barely a year after the 44-second mark was broken in the 100 fly, Dressel blew through the 43-second mark, winning the event in a blistering 42.80 to successfully defend his crown while setting NCAA and American records.  On the meet’s final day, the Gator senior capped off his collegiate career in spectacular fashion, claiming the 100 free in 39.90.  In a 48-hour span, Dressel had bettered three Holy Grail swimming records while established NCAA and American marks in the process. In addition to his accomplishments in the pool, Dressel is infamous for his expansive and colorful portfolio of tattoos, which he has been developing since 2015.  It started with an eagle, which Dressel had inked across his left shoulder as a UF freshman.  An American flag was added in early 2016.  Following the Rio Games, Dressel had Olympic rings inked onto his right forearm.  His entire left shoulder and arm is now a sleeve which contains a gator and a bear. In 2017, Caeleb Remel Dressel was voted American and World Swimmer of the Year by Swimming World magazine.  He was also named FINA Swimmer of the Year.  Mr. Dressel, who signed as a professional with Speedo in July 2018, succeeded Michael Phelps for each of these coveted awards.