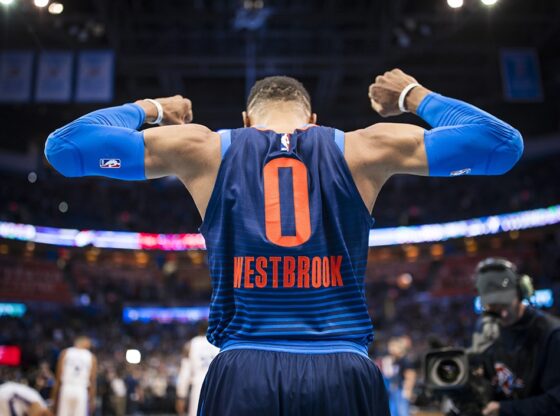 Today we reveal the greatest athletes by number.  Here are the best to wear 00 through 10.

0 – Russell Westbrook is one of two players in NBA history to average a triple-double for a season.  The six-time All-Star was 2016-17 NBA MVP.  Runners up:  Al Oliver, Gilbert Arenas.

1– Oscar Robertson is the first player to average a triple-double for a season.  The Big O was a three-time All-American, won an Olympic gold medal, an NBA title, was NBA MVP in 1964.  Runners up: Warren Moon, Ozzie Smith.

3 – Babe Ruth is the greatest and most important player in baseball history.  He led the AL in ERA, homers, RBI, and batting during his epic career.  Runners up: Dale Earnhardt, Dwayne Wade, Allen Iverson.

4 – Number Four is Bobby Orr.  The greatest defenseman in NHL history forever changed the way the game is played and remains the only blue-liner to win a scoring title.  Runners up: Lou Gehrig, Brett Favre, Jean Beliveau.

7 – Mickey Charles Mantle won seven world championships, the 1956 Triple Crown, a Gold Glove and three AL MVP Awards.  And he did it on one leg, playing nearly his entire career with a damaged knee.  Runners up: John Elway, Nate Archibald, Phil Esposito.

10 – The greatest footballer ever is Pele. Second on the list is Messi.  Both wore Number Ten.  A brilliant playmaker, Pele was elected IOC Athlete of the Century and World Player of the Century in 1999.  Runners up: Lionel Messi, Walt Frazier, Guy Lefleur, Chipper Jones.

Agree or disagree with this list?  Let us know who are your greatest athletes by number.