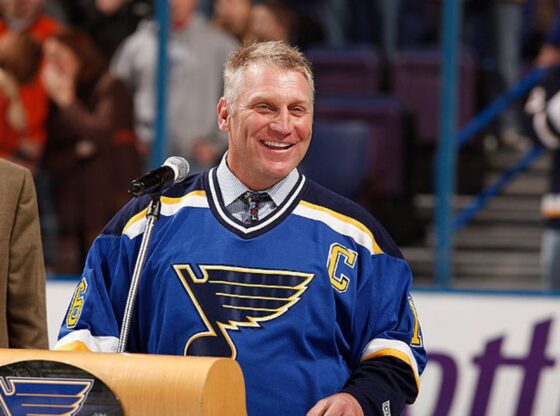 Brett Andrew Hull joined his dad in the Hockey Hall of Fame in 2009, becoming the first father-and-son pair of players ever inducted.

Born in his father’s hometown of Belleville, Ontario, on August 9, 1964, Brett was the third of five children born to Bobby, known as the “Golden Jet,” and Joanne, a former professional skater. His uncle Dennis, the “Silver Jet,” played alongside his father for eight seasons with the Chicago Black Hawks and his brother Bart played running back in the Canadian Football League [Daily Dose, November 25]. Hull spent his early childhood in Chicago, playing on his first organized hockey team at four, before moving to Winnipeg in the summer of 1972 after his father jumped the NHL for a million-dollar contract with the Winnipeg Jets of the rival World Hockey Association. In 1977, his Winnipeg South Monarchs team won the prestigious Quebec Winter Carnival Pee-Wee hockey tournament, where he was visited by Montreal Canadians legend Jean Beliveau [Daily Dose, December 2], who wanted to meet “the young Hull” following the title game. After his parents’ divorce in 1979, Hull moved to Vancouver, where he joined the Penticton Knights of the tier-II British Columbia Junior Hockey League [BCJHL], scored 48 goals in 50 games and was named Rookie of the Year. Despite his pedigree, Hull was passed over by the NHL as teams were unconvinced of his commitment and conditioning. The following year, he scored 105 goals and collected 188 points to set a new BCJHL scoring record. The Calgary Flames selected Hull in the sixth round, 117th overall, in the 1984 NHL Entry Draft, but he opted to accept a scholarship to the University of Minnesota-Duluth, where he set numerous school records and was a finalist for the Hobey Baker Award as top college player during his two seasons as a Bulldog.

Hull turned pro following his sophomore season at UMD, joining the Flames and making his NHL debut in game three of the Stanley Cup Finals. In 1986-87, he was assigned to the Flames AHL affiliate, the Moncton Golden Flames, where he won the Dudley “Red” Garrett Award as rookie of the year after scoring 50 goals to tie a league record. He earned a spot with the big club in 1987-88 before being traded to the St. Louis Blues in March 1988. Two years later, the Blues acquired center Adam Oates–a superb passer–and “Hull and Oates” formed one of the most prolific scoring combinations in the league. Hull scored 86 goals in 1990-91, the third-best goal-scoring season in NHL history and was voted league MVP by both the press and players. In 1998, after 11 seasons in St. Louis, he signed with the Dallas Stars and scored his 1,000th point in November. In June, he scored a goal in overtime to beat the Buffalo Sabres for the 1999 Stanley Cup and the following season tallied his 600th career goal. “The Golden Brett” joined the Detroit Red Wings for the 2001-02 season and scored a league-leading ten goals in the playoffs, including two in the Finals, to win his second Stanley Cup. He joined the Phoenix Coyotes—formerly the Winnipeg Jets—in 2004 but missed the season due to the NHL lockout. Hull retired five games into the 2005-06 season, feeling he was no longer able to play at the level he expected of himself.

Brett Hull played 19 NHL seasons, was an eight-time All-Star, led the NHL in goals three times and won the Lady Byng Trophy as the league’s most sportsmanlike player in 1990. He and Wayne Gretzky are the only two players in league history to score 50 goals in 50 games in two separate seasons [the Great One did it three times] and only Gretzky and Gordie Howe have scored more regular season career goals. The “Golden Brett” is the NHL’s all-time leader in playoff power play goals, playoff goals scored and is the St. Louis Blues’ all-time leading goal scorer [527]. He won a silver medal with Team USA [his mother is a U.S. citizen] in the 2002 Olympics and he won Stanley Cups. Bobby and Brett Hull are the only two father-son tandems to have won the Hart Trophy as NHL MVP, are the only pair to each score 1,000 career points, the only with 600 career goals each and were the first father-son duo elected to the Hockey Hall of Fame. In February 2006, UMD retired Hull’s number 29. Ten months later, the St. Louis Blues retired his number 16 sweater.

On this date in 1991, Brett Andrew Hull scored his 48th and 49th goals in the 48th game of the season in a 7-3 loss to the Minnesota North Stars. in his next game, Hull would go on to become the 5th player in NHL history to reach the “50 in 50” milestone, a feat even the great Bobby Hull never accomplished. The closest Bobby Hull ever came was in 1965, when he scored his 50th goal in his 52nd game.