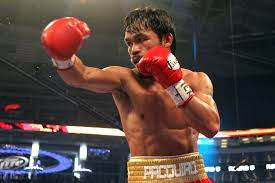 All great boxers have nicknames – it is a crucial part of the sport.  Here are a dozen of the best handles in the annals of The Sweet Science.

A four-weight world champion and 1984 Olympic lightweight gold medalist, Pernell “Sweat Pea” Whitaker was the best pound-for-pound fighter in the world from 1993 to 1997.

Ray “Boom Boom” Mancini held the WBA light heavyweight title from 1982 to 1984, but suffered emotional trauma and was never the same fighter after his opponent, Duk Koo Kim, died following their bout in November 1982.

As a teenager, Walter Smith Jr. changed his name to Ray Robinson in order to enter an AAU match.  With a boxing style as sweet as sugar, he became “Sugar” Ray Robinson — the greatest fighter in history.

As undisputed middleweight champion from 1980 to 1987, Marvin Hagler was marvelous.  The two-time Fighter of the Year liked the moniker so much he legally changed his name to Marvelous Marvin Hagler in 1982.

A devastating puncher, Thomas “Hitman” Hearns climbed five weight classes during a career that lasted nearly three decades.  In June 2012, the two-time Fighter of the Year landed in the International Boxing Hall of Fame.

Archie “The Mongoose” Moore reigned as world lightweight champion for a decade – the longest span ever.  Considered the third greatest pound-for-pound fighter in history, The Mongoose won 186 of 219 professional bouts.

Oscar De La Hoya was 223-5 as an amateur, winning Golden Gloves and Olympic gold medals.  As a pro, the “Golden Boy” went 39-5, with 30 of his wins coming by knockout.

Inside the ring, Michael Nunn had few peers, earning him the nickname “Second To.”  Nunn had less success outside the ropes and was arrested on drug charges in 2002.

Although never a champion, Carl Williams had one of the best nicknames – “The Truth” – in heavyweight history.  The two-time New York Golden Gloves champ won 30 pro bouts before dying of cancer in 2013.

James “Bonecrusher” Smith is the first heavyweight champion with a college degree.  Bonecrusher, a graduate of Shaw University in Raleigh, North Carolina, held the WBA heavyweight title from 1986 to 1987.

Perhaps the best nickname in boxing history belongs to Joe Frazier.  “Smokin’ Joe” was relentless, winning the Fight of the Century over Muhammed Ali in 1971.  The 1964 Olympic heavyweight gold medalist was named Fighter of the Year three times in his hall-of-fame career.