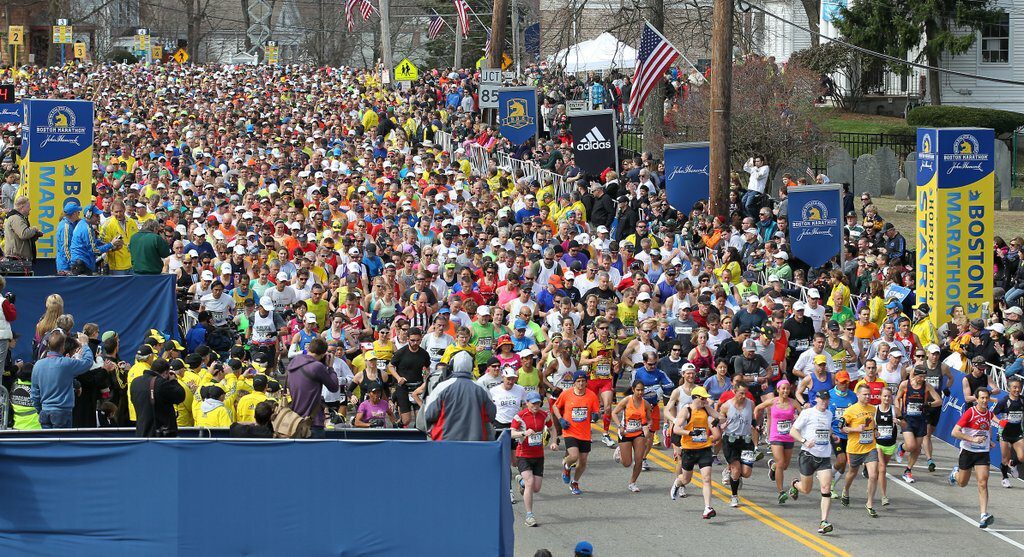 The Boston Marathon is the oldest and fastest marathon in the United States. “Marathon” comes from the legend of Pheidippides, a Greek messenger, who was sent from the battlefield of Marathon to Athens to announce that the Persians had been defeated in the Battle of Marathon, in which he had just fought.  Pheidippides ran the entire distance without stopping and burst into the Greek Assembly, exclaiming, “we have won!”  When the modern Olympics began in Athens in 1896, organizers recalled the ancient glory of Greece and determined that the final event of the Games would be a 25 mile [40K] run that they dubbed “marathon.”  At the 1908 London Games, the marathon course started at Windsor Castle and finished at White City Stadium.  Following one lap of the track, the finish line was in front of the Royal Box.  In May 1921, the 26.2 mile distance was adapted by the International Amateur Athletics Federation as the official length of the marathon.  More than 500 marathons are held throughout the world each year, six of which are considered world majors—the most important and prestigious marathon races—and include Tokyo, Berlin, London, Chicago, New York City and Boston. The Boston Marathon is an annual race hosted by several cities in greater Boston.  It is always held on Patriot’s Day, the third Monday of April.  Begun in 1897 and inspired by the marathon in Athens one year earlier, the Boston Marathon is one of four major events held in the U.S. through the years of both World Wars, joining the Kentucky Derby, the Rose Parade, and the Westminster Kennel Club Dog Show.  Patriot’s Day—also known as Marathon Monday—is a state holiday in Massachusetts, honoring the first battles of the American Revolutionary War.  The Boston Athletic Association, a non-profit, running- focused, sporting association serving the Boston area, has managed the race since its inception.  The B.A.A., headquartered at the corner of Exeter and Bolyston Streets in the Back Bay neighborhood, set forth to “encourage all manly sports and promote physical culture” by establishing the marathon.  Traditionally, the race was held on April 19.  Beginning in 1969, it was moved to the third Monday in April.  The course begins in Hopkinton, runs through eight cities and towns and finishes at Copley Square, alongside the Boston Library.  The course is difficult and includes several hills, including the Newton Hills, which begin at Mile 16.  Heartbreak Hill—the last of the Newton Hills—is the most demanding part of the course.  Although Heartbreak Hill only rises 88 feet over a 650 yard stretch, it comes between Mile 20 and 21, the point at which runners hit “the wall”—when muscle glycogen stores are likely to be depleted—making the incline excruciating. Over 500,000 spectators—roughly 80 percent of Boston’s population—line the course on race day, making the Boston Marathon New England’s most widely viewed sporting event.  Over 30,000 runners comprise the field, with a record 36,748 participating in the centennial event in 1996.  Participants must qualify by having completed a full marathon, certified by the B.A.A., that meets established time requirements by age and gender.  Through 2005, the race began at noon.  Since 2006, the event starts in the morning, using a staggered start of several waves, including elite, special needs and amateur competitors.  Because of the decrease in elevation [459 feet] from start to finish, Boston does not meet the criteria for marathon record eligibility.  The fastest recorded time is 2:03:02, run by Geoffrey Mutai of Kenya in 2011.  Women were not allowed to enter until 1972, and prize money was not awarded until 1986.  The “Scream Tunnel” is located at Wellesley College, roughly the halfway point of the course.  Students line the route for a quarter-mile, where they scream and offer kisses.  Runners claim it can be heard from one mile away.  Since 1903, the Boston Red Sox have played a home game on Patriot’s Day, with first pitch at 11:05 am.  When the game ends, players and fans crowd into Kenmore Square to cheer as runners enter the final mile.  As the final finishers run through the line, race director Dave McGillivray heads back to Hopkinton to run the course in memory of his late grandfather, a tradition Mr. McGillivray has continued for the past 43 consecutive years. On this date in 1897, John J. McDermott of New York won the inaugural Boston Marathon in 2:55:10.  The race began with 15 contestants and finished with ten, with Mr. McDermott winning by nearly seven minutes.