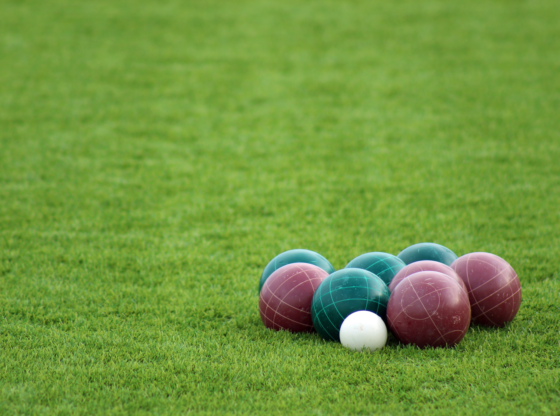 Bocce is the oldest known sport in history.

Pronounced botchee and sometimes anglicized as bocci, it is a ball sport belonging to the Boules family.  Boules is a collective name for a wide range of games involving throwing or rolling heavy balls as close as possible to a small target ball.  Closely related to British bowls and French petanque, bocce originated in 5,000 BC, where ancient Egyptians rolled polished rocks.  The game was introduced to the Greeks around 800 BC before becoming the ancient game of the Roman Empire.  Early Romans used coconuts brought back from Africa and later used hard olive wood to carve out bocce balls.  Once the sport of statesmen and rulers, the Catholic Church officially prohibited clergyman from playing by proclaiming bocce a means of gambling.  Developed in its present form in Italy, bocce is currently played around the world.  The sport is extremely popular on the eastern side of the Adriatic, especially in Croatia, Montenegro and Bosnia.  In Slovenia, it is known as balinanje.

Bocce is the third largest participant sport in the world, behind soccer and golf.  The non-contact game’s spirit of competition rejuvenates the body.  It is played on a variety of surfaces, including sand, grass, carpet and clay.  Bocce is played indoors and outdoors, at the beach and at night—using balls that glow in the dark.  Court bocce—a specific form of open bocce, is the most popular form played in the U.S.  Traditionally played on courts 90 feet in length and 8 to 13 feet wide, competition courts have a smooth surface, with a three-inch base of crushed stone on a compacted sub-base that is then covered with two inches of clay, crushed shells or similar materials for a hard, level surface which is brushed before each match.  Courts are surrounded by sideboards that are six to 12 inches high.

Bocce is played with eight balls—usually four red and four green—and one smaller ball.  The colored balls are made of phenolic resin or metal, have a diameter of 4.20 inches, and weigh just over two pounds.  A game can be conducted between two players or two teams of two, three or four.  A match is started by a randomly chosen side being given the chance to throw the smaller ball—called the jack in English, le but in French and pallino [little ball] in Italian—from one end of the court into a zone at the other end.  The side that places the pallino goes first.  Once the first bowl has taken place, the other side bowls.  From then on, the side which does not have the ball closest to the pallino has a chance to bowl,  until one side or the other has used their four balls.  At that point, the other side bowls their remaining balls.  The team with the closest ball to the pallino is the only team that can score points in any frame.  The scoring team receives one point for each of their balls that is closer to the pallino than the closest ball of the other team.  In beach bocce, a ball touching the pallino is called a kiss and is worth two points.  The duration of the game varies by region by is typically seven to 13 points.

Players are permitted to throw the ball in the air using an underarm action.  A punto or puntata shot is rolling or throwing the ball as close as possible to the pallino.  A raffata or spocking shot is rolling a ball very fast to purposely hit and move an opponent’s ball or the pallino.  A volo shot is thrown through the air with the intent to hit and move an opponent’s ball or the pallino.  In Court Bocce, a line—called the Pointing Foul Line—is marked six feet from each backboard behind which the pallino and bocce balls must be released.  In the beach version, this line is generally drawn in the sand by the contestants.

Martinez, California–35 miles northeast of San Francisco–is where the martini was invented.  It is also considered the bocce capital of the U.S.  It contains the largest bocce league in America, with 15 courts and over 2,000 members.  Drive 80 minutes south, and you are in Livermore, site of the 2016 United States Bocce Championships, which concluded two weeks ago.  Last year’s tournament was held at the Methuen Sons of Italy Lodge #902, 30 miles north of Boston, where president Frank Bagarella presented awards to contestants in several divisions.  Recipeints included Vinny Ruggieri, Danny Pasaglia, Tony Randazzo, Teresa Passaglia and “Sweet” Lou DePrizio.  The 2016 World Beach Bocce Championships were held last weekend in Southern California–at Dog Beach in Del Mar–where 412 teams played over 1,000 games on 81 courts.  The Confederatio Mondiale de Sports de Boules was created in Monaco in 1985 for the purpose of lobbying the IOC to make Boules part of the Olympic Games.  To date, the efforts have been unsuccessful.