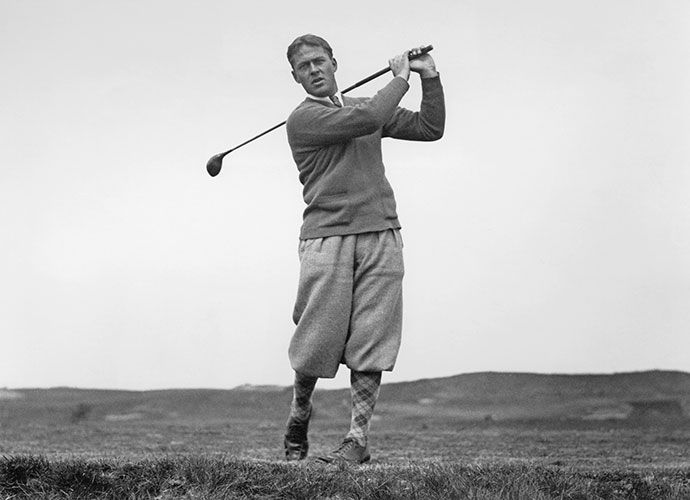 Robert Tyre Jones, Jr. was the greatest amateur golfer ever to play the game.

Born in Atlanta, Georgia, on this date in 1902, Jones was a sickly child, unable to eat solid food until he was five.  His father, “Colonel” Robert Purmedus Jones, was a prominent lawyer and the family was of means, purchasing a summer home along the fairways of East Lake Golf Club in Atlanta.  Jones was introduced to golf at six and by seven was mimicking the swing of East Lake’s club pro, Stewart Maiden, who observed, “Bobby was never lonesome with a golf club in his hands.  He was born with the soul of a perfectionist.”  At eleven, he shot 80 for the first time.  Three years later, he qualified for the U.S. Amateur, where he advanced to the quarterfinals [the format was match play at that time] at Merion Golf Club outside Philadelphia.  Grantland Rice later wrote, “Bobby was a short, rotund kid, with the face of an angel and temper of a timber wolf.  Even at 14, Bobby could not understand how anyone could ever miss any kind of golf shot.”  Jones developed a reputation as a spoiled, club-throwing hot head.  At 14, he was considered a sure shot for greatness.  When he hadn’t achieved it by 20, many considered him a failure.  During the third round of the 1921 Open Championship at St. Andrews, Jones hit his ball into a bunker on the 1th hole.  After taking four swings and not getting out, he stormed off the course while tearing up his scorecard.

Jones won his first major championship in an 18-hole playoff at the 1923 U.S. Open at Inwood Country Club in New York.  In 1924 and 1925, he won the U.S. Amateur, then took the U.S. and British Opens the following year.  After capturing four more major titles in the next three years, Jones had surpassed Walter Hagen and Gene Sarazen as the era’s best player.  In 1930, Bobby Jones became the only player in golf history to win the Grand Slam by capturing all four major championships in the same calendar year.  In late May, he led the British Amateur wire-to-wire, beating Roger Wethered at the Old Course at St. Andrews.  Three weeks later, he won his third British Open title in four tries.  Jones returned Stateside to a ticker-tape parade in New York City before traveling to Minneapolis in July, where he beat Macdonald Smith by two shots at Interlachen Country Club to capture his fourth U.S. Open.  Jones completed the Slam in September by taking the U.S. Amateur at Merion Cricket Club outside Philadelphia.  Two months later, the 28 year-old amateur retired, claiming, “Championship golf is something like a cage.  First you are expected to get into it and then you are expected to stay there.  But of course, nobody can stay there.”

Robert Tyre Jones, Jr. was a child prodigy who became The Man.  Jones played during the “Golden Age of Sports” and, along with Babe Ruth, Jack Dempsey [September 14], Bill Tilden and Red Grange, was an American sports icon.  He won 13 major championships, a record that stood for over 40 years before being surpassed by Jack Nicklaus, who idolized Mr. Jones.  After receiving an engineering degree from Georgia Tech, Jones studied English Literature at Harvard.  He then entered Emory University’s law school, passed the bar exam after three semesters and joined his father’s law practice in 1928.  A lawyer by profession, Jones never accepted money and remained an amateur throughout his career.  At the 1925 U.S. Open, he called a penalty on himself, costing a stroke and the victory.  When applauded afterward for his gesture, Jones responded, “You might as well praise me for not robbing banks.”  He was a complete golfer—supremely gifted with vast intelligence and profound character.  “In the opinion of many people, of all the great sports athletes, Jones came closest to being what we call a great man,” wrote Herbert Warren Wind.  Jones founded and helped design Augusta National Golf Club and co-founded the Masters Tournament, first contested in 1934.  During World War II, he served as an intelligence officer in England with the Ninth Air Force, reaching the rank of lieutenant colonel.  He made instructional golf films in the early 1930s which were very popular, including The Niblick, The Mashie and The Spoon and developed the first set of steel-shafted golf clubs with the A.G Spalding Company.

In 1948, Jones was diagnosed with syringomyelia, a fluid-filled cavity in his spinal cord which caused crippling pain and paralysis.  He was eventually restricted to a wheelchair and died in Atlanta on December 18, 1971.  Since 1955, the Bob Jones Award–the United States Golf Association’s highest honor—has been given in recognition of distinguished sportsmanship in golf.  Mr. Jones was inducted into the World Golf Hall of Fame in 1974 and has been made President in Perpetuity of Augusta National Golf Club.  In 2009, he was ranked by Golf magazine as the third greatest player of all time, behind Jack Nicklaus and Eldrick Woods.

“Competitive golf is played mainly on a five-and-a-half inch course—the space between your ears.”– Bobby Jones