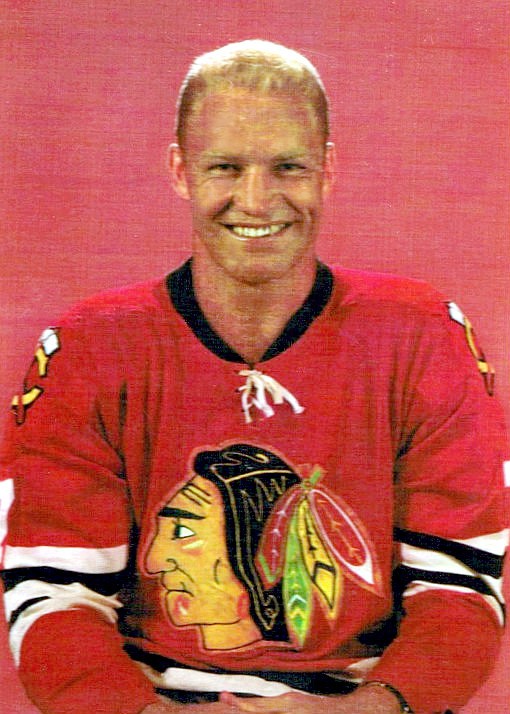 He is the oldest of eleven children raised on a dairy farm.  Hull’s father, the “Blonde Flash,” played minor league hockey before working as a laborer at Canada Cement Company.  Just before turning four, Bobby received his first pair of skates as a Christmas present and learned to skate on the frozen Bay of Quinte near the family’s farm.  At ten, he attended a Red Wings game in Detroit, where he collected an autograph from his idol, Gordie Howe.  Hull moved away from home at 14 to play for the Galt Black Hawks, a Junior B team in the Ontario Hockey League.  Two years later, he signed with the Chicago Blackhawks for $ 100–with a promise of another $ 1,000 if he ever made the NHL.  In 1955, Hull led the Woodstock Warriors to the Sutherland Cup as champions of the OHL before joining the St. Catharines Teepees’ Junior A team for two seasons.

In 1957, the Chicago Blackhawks were a struggling franchise, having finished in last place four straight years and missing the playoffs in eleven of twelve seasons.  Hull joined the team at 18 and quickly blossomed into a star, finishing second in rookie of the year balloting.  By his third season, he led the league in goal- and point-scoring while earning the Hart Trophy as league MVP.  In 1961, Hull teamed with Murray Balfour and Bill Hay to form the “Million Dollar Line” while leading the Hawks to their first Stanley Cup title since 1938.  His blonde hair, end-to-end rushes, incredible speed and blistering shot earned him the nickname “The Golden Jet,” and Bobby Hull established himself as the best player in hockey.  Prior to 1962, only Maurice Richard [Daily Dose, February 29] had scored 50 goals in a NHL season.  Bobby Hull tied that mark in 1961-62 and reached it four more times over the next decade.  After being named to twelve All-Star teams and leading Chicago to three more Stanley Cup Finals, Hull inked the richest contract in hockey history–$ 250,000 per year with a $ 1,000,000 signing bonus—joining the Winnipeg Jets of the upstart World Hockey Association as player-coach in 1972.  Because he joined the rival league, Hull was not allowed to represent Team Canada in the 1972 Summit Series [Daily Dose, September 28].  After leading the Jets to two championships and scoring 77 goals to set a new single-season record, Mr. Hull retired in 1979–the same year the WHA folded.

Robert Marvin Hull, Jr. was instrumental in two hockey leagues in two decades.  The Golden Jet won seven scoring titles and two MVP awards while leading the once-hapless Chicago Blackhawks to four Stanley Cup Finals in eleven seasons before bringing credibility to the upstart World Hockey Association, where he earned two more MVP awards.  Hull was the second player in NHL history to score 50 goals and 100 points in a season.  At 5’10”, 191 pounds, Hull had a muscular torso, powerful legs and was one of the fastest skaters in the game.  His slap shot—once clocked at 118 mph–was a blur and his wrist shot was harder.  Hull could skate 30 mph and was the most feared scorer of his day.   The Jet signed hockey’s first $ 100,000 contract [with Chicago in 1968] and first $ 1,000,000 deal [with Winnipeg in 1972].  Dennis Hull, the “Silver Jet,” played with his older brother for eight seasons in Chicago and is number six on the Blackhawks all-time goals, points and points-created lists.  Bobby’s son Brett [Daily Dose, January 22] played 19 seasons before retiring as the third- greatest goal scorer in NHL history.  Bobby and Brett Hull were the first father-son duo ever elected to the Hockey Hall of Fame, score 1,000 career points and are the only tandem to win the Hart Trophy [MVP], Lady Byng Trophy and a Stanley Cup.

On this date in 1972, Bobby Hull became the second player in NHL history to score 600 career goals when he took a pass from the Silver Jet and fired it past Bruins goaltender Gerry Cheevers in Boston Garden.

“Going to the WHA was not one bit about money.  I had been at war with Blackhawk’s management for years.  We hated each other.  When the Winnipeg Jets offered the contract, I thought it was a joke.  I pretended to go along with it, just to scare Chicago.  Then my agent told me these guys were serious.”– Bobby Hull, on joining the WHA’s Winnipeg Jets in 1972