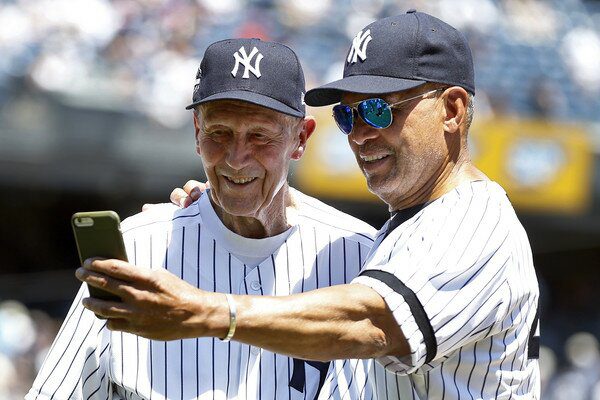 One of the last remaining ambassadors from baseball’s most elegant era, Brown never drank, never smoked, and never chased women.

He was married to Sara, the love of his life, for 61 years.  Brown makes time for everyone and doesn’t accept money for his autograph.  In five full big-league seasons and parts of three others, Brown hit .300 or better three times.  He helped the Yankees win four World Series titles and would have won two more had he not missed the 1952 and ’53 Fall Classics while serving in a MASH unit in Korea.  A superb clutch hitter, Brown played in 17 World Series games.  He collected 18 hits in 41 at-bats, compiling the highest average [.439] in World Series history for a player with at least 20 at-bats. The oldest living member of the Yankees’ 1947 World Series championship team, Brown is a decorated hero of two wars.  The first player in major league history to earn a medical degree while playing baseball, Dr. Brown practiced cardiology in Fort Worth for a quarter-century.  He attended Stanford, UCLA and Tulane, and is a member of each school’s Athletics Hall of Fame.  From 1984 to 1994, he served as president of the American League, where he pushed for a ban on smokeless tobacco in the minor leagues.

As a Stanford freshman, Brown rescued a Coast Guardsman from a plane crash in the Pacific.  He was later awarded a Silver Lifesaving Medal from the United States Coast Guard.

Dr. Brown is Yankees royalty, where he is a regular at Old-Timers Day.  Under the legendary Casey Stengel, he played alongside ten future Hall of Famers.  Dubbed the Golden Boy, Brown vacationed in Tokyo with a honeymooning Joe DiMaggio and Marilyn Monroe.  He helped the Yanks win the 1951 World Series — DiMaggio’s last season in pinstripes and a 19-year-old Mickey Mantle’s first.  Brown came up through the minors with Yogi and was on the field when Whitey Ford made his rookie debut. Used primarily as a third baseman, the 6’1”, 180-pound Bobby Brown threw right and batted left.  He broke into the big leagues as a shortstop, but also played second base and all three outfield positions during his eight years in New York.  Due to the demands of medical school, Brown missed spring training and was forced to start each season cold.  He had a keen batting eye and good plate discipline.  In more than 1,600 career at-bats, Brown struck out only 88 times, or less than one whiff for every 18 trips to the plate [conversely, Yankee outfielder Giancarlo Stanton had struck out for the 88th time by mid-June of the 2018 season]. Born in Seattle October 25, 1924, Robert William Brown is the son of a former semi-pro baseball player who moved his family often while working as a divisional manager for a liquor company.  After attending middle school in New Jersey, Brown finished high school in San Francisco.  He attended Galileo High, a school that has produced 16 big leaguers [including all three DiMaggio brothers], O.J. Simpson, and Hank Luisetti, a two-time college basketball player of the year and inventor of the jump shot.  President of his class, a straight-A student and captain of the baseball team, Brown graduated Galileo in June 1942 and entered Stanford that fall, where he starred on the baseball team.

Brown roomed with Yogi Berra on Yankee road trips.  The two were reading in their hotel room one night – Berra a comic book and Brown his copy of Boyd’s Pathology.  When Berra had finished his comic, he tossed it aside and asked Brown, “So, how is yours turning out?”

He enlisted in the Navy at 19 and, in July 1943, was assigned to Officer’s Training School at UCLA.  Brown was given five semesters to complete his pre-med studies, then shipped to Tulane University in December 1944.  That spring, he hit .444 and attracted the attention of the Yankees.  In February 1946, New York offered Brown a then-unheard-of $50,000 signing bonus, the second-highest in history and more than the dean at Tulane Medical School earned. Brown reported to the Newark Bears, the Yanks’ Triple-A affiliate, for the 1946 season.  He led the International League with 174 hits, including 27 doubles, and finished eight points behind Jackie Robinson for the league batting crown.  In September, he and Berra were called up to the big leagues for the final week of the ’46 season.  In seven games, Brown went 8-for-24, finishing at .333. Dr. Brown played in his first World Series in 1947.  Facing the Brooklyn Dodgers in Game 7, he belted two doubles with a single and a walk to pace the Bronx Bombers to a 5-2 win.  In the Fall Classic two years later, Mr. October went 6-for-12, including two triples, and scored four runs as the Yanks beat the Dodgers in five games.  The day after the Series ended, Brown drove back to New Orleans to resume medical school.

Like Archibald “Moonlight” Graham, who set aside his big-league dreams to become a doctor, Bobby Brown has no regrets. “Not going to medical school would have been a tragedy.”

In 1949, Brown’s sister introduced him to Sara French, a student at Newcomb College, Tulane’s all-women sister school.  A smart and lovely woman from Dallas’ Highland Park neighborhood, Sara was named Tulane Homecoming queen in 1950, the same year Bobby asked for her hand in marriage.  “Tell your father I’m a third baseman for the Yankees,” Brown counseled his fiancée.  “Tell your mother I’m a doctor.”  The two were scheduled to marry following the 1951 World Series — on October 12.  When a downpour between Games 3 and 4 extended the Series, the wedding was pushed back four days.  Bobby and Sara wed October 16, 1951, and were together 61 years, until Sara’s passing in 2012.  Brown contends it was the only marriage ever postponed by rain. After his fifth full season with the Yankees, Brown enlisted in the Army.  Midway through the 1952 campaign, he was called to Korea, where he served as the battalion surgeon for the 160th Field Artillery Battalion, 45th Division. “I still remember my unit landing at Inchon,” recalled Brown.  “It was the first day of the World Series.  Don Newcombe was starting for the Dodgers.  And I’m in Korea.”  In July 1953, Brown left for a Tokyo Army hospital, where he stayed until April 1954.  After 19 months in Korea, he returned to the Yankees on May 1, but played in just 29 games before leaving to begin an internal medicine residency.

Bobby Brown considers Ted Williams the greatest natural hitter that he ever saw, while Joe DiMaggio was the best all-around ballplayer.

Dr. Brown retired from baseball June 30, 1954, at 29.  He finished residency in 1957, followed by a fellowship at Tulane.  In 1958, he moved to Texas to start a private practice, becoming one of the first cardiologists in Fort Worth.  In 1974, the father of three took a six-month leave of absence to serve as interim president of the Texas Rangers.  The club quickly rose to first place.  “Modesty keeps me from taking the credit,” Brown said at the time.  “Modesty, and Ferguson Jenkins and Billy Martin.”  A decade later, he was named the sixth president of the American League, succeeding Lee MacPhail. Bobby Brown stepped down as AL president in 1994, at 70.  He returned to Fort Worth, where he remains an active fundraiser for several charitable organizations.  A grandfather of ten, Brown underwent heart surgery in 2010.  He now has a pacemaker and has recovered fully.  One of the most honored and respected men in baseball history, Dr. Brown – a true American hero and one of the greatest Yankees of all time —  has created an unrivaled and unblemished legacy. On this date in 1949, the great Bobby Brown went 4-for-6, scored two runs and drove in another to help the Yankees beat the Senators, 13-3.

In the second game of a doubleheader before more than 33,000 fans at Griffith Stadium in Washington, D.C., Brown batted sixth and played third base.  Dr. Brown raised his average to .338 while the Yanks improved their record to 25-12.  The victory started a six-game winning streak, New York’s longest of the season.  The Bronx Bombers would go on to win the American League pennant and beat the Brooklyn Dodgers, four games to one, to capture the first of a record five straight World Series titles.