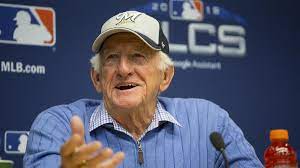 Despite batting only .200 and playing in fewer than 300 major league games, Bob Uecker landed in the Baseball Hall of Fame.

Known for his humor, particularly regarding his undistinguished playing career, Uecker didn’t become famous until after he retired as a player.  He made over 100 appearances on The Tonight Show, where host Johnny Carson – who considered Uecker the funniest man he ever met – dubbed the former backup catcher Mr. Baseball.

In 1962 I was named Minor League Player of the Year.  It was my second season in the bigs.

Bob Uecker played for four teams between 1962 and 1967.  A solid defensive catcher who helped the St. Louis Cardinals capture a World Series title in 1964, he backed up Joe Torre and Tim McCarver.  In six MLB seasons, Uecker put up pedestrian numbers, collecting 146 hits [ten of them homers] while driving in 74 runs during stints in Milwaukee, St. Louis, Philadelphia and Atlanta.

Uecker once hit a home run off Dodgers Hall of Famer Sandy Koufax.  He later joked that the homer would keep legendary left-hander from getting into Cooperstown. Uecker is a master of dry, self-deprecating humor.  Possessing a quick wit, he considers getting out of a rundown against the Mets and walking with the bases loaded to drive in the winning run in a 1967 spring training intersquad game as career highlights.

I knew when my career was over.  In 1965 my baseball card came out with no picture.

Although he retired with a highly-respectable career fielding percentage of .981, Uecker struggled in 1967.  After appearing in 18 games with the Phillies to start the season, Uecker was traded to Atlanta in June, where he played 59 games for the Braves.  Uecker’s 11 errors led all big-league catchers in 1967.  He also led the league in passed balls, with 27.  Teammate Joe Torre was next on the list with 16, but Torre played in 132 games and handled over 500 more chances than Uecker.

Former broadcasting partner Al Michaels said Bob Uecker is the same on the air as he is off of it.  The thing that makes him so likeable is that he is genuine.  Baseball – and Milwaukee – is his life, and Uecker is grateful for all that the game and his hometown have given him.  Although he has done radio broadcasts for the Brewers for nearly five decades, Mr. Baseball has never had a contract with the team.

Sporting goods companies pay me not to endorse their products.

Born in Milwaukee January 26, 1934, Robert George Uecker is larger than life in Wisconsin.  A graduate of Milwaukee’s Boys Trade and Technical High School, he signed with the then-hometown Braves before the 1956 season.  After bouncing around in the minors for six seasons, Uecker made his big-league debut 57 years ago this month, going hitless in one plate appearance against the Los Angeles Dodgers.

Bob Uecker’s big break came in 1969, when good friend Al Hirt put him on stage as an opening act for comedian Don Rickles at the jazz trumpeter’s nightclub in Atlanta.  Soon, Uecker was appearing with Carson, Mike Douglas and David Letterman.  He gained national recognition – both as a funnyman and baseball broadcaster – earning stints doing color commentary for national games on ABC and NBC.

The affable Uecker began his radio career in 1971, when Brewers owner-turned-commissioner Bud Selig hired him as the voice of the Brew Crew.  Now in his 49th season with the club, he no longer goes on road trips with the Brewers, but remains an icon at Milwaukee’s Miller Park.  For years, Uecker threw batting practice at Brewers games that he would later call.  His trademark “Get up!  Get up! Get outta here! Gone!” call when a Brewer hits a home run has become legendary.

I led the league in go get ‘em next time.

A five-time Wisconsin Sportscaster of the Year, Uecker received the prestigious Ford C. Frick Award in 2003, earning him a spot in the Baseball Hall of Fame.  His acceptance speech was one of the most memorable in history, leaving everyone in the audience, including former President George H.W. Bush, in tears with laughter.  In 1987, Uecker served as ring announcer at Wrestlemania III between Hulk Hogan and Andre the Giant at the Pontiac Silverdome.  His work earned him a spot in the WWE Hall of Fame in 2010.

As a member of the Miller Lite All-Stars in the 1980s, Uecker turned beer commercials into comedies.  One of the stars of ABC’s sitcom Mr. Belvedere, he hosted SNL in 1984 and made the Major League movie series cult classics.  In the film, Uecker played a version of himself as Harry Doyle, the fictional Cleveland Indians play-by-play announcer – “Just a bit outside.”  When the real-life Indians advanced to the World Series in 2016, an internet campaign took off for Uecker to join Joe Buck in the FOX broadcast booth as Doyle.  Not wishing to disrespect the World Series, Uecker scoffed at the notion.

When I looked to the third base coach for a sign, he turned his back on me.

Mr. Uecker was inducted into the Radio Hall of Fame in 2001.  A decade later, he entered the National Sportscasters and Sportswriters Association Hall of Fame.  One of the most beloved figures in Milwaukee baseball history, Uecker is a member of the Brewers Walk of Fame as well as the team’s Ring of Honor.  Statues have been erected in his honor at Miller Park.  In 2012, a statue bearing Uecker’s likeness joined those previously dedicated to Hank Aaron and Robin Yount outside the stadium.  Two years later, a statue was placed in the last row of the “Uecker Seats.”  Costing $1 each, the seats are located on the fourth deck behind beams supporting Miller Park’s massive retractable roof.  The statue commemorates Mr. Baseball’s famous “I must be in the front row!” line from 1980’s Miller Lite ads.

On this date in 1965, backup catcher Bob Uecker got a rare start for the Cardinals.

In the fourth game of the season, the 31-year-old Uecker went hitless in three at-bats and scored a run in an 8-0 win over the Cincinnati Reds at Busch Stadium in St. Louis.  Uecker called a good game, as Redbirds right-hander Bob Gibson went the distance, scattering eight hits while striking out 11 to record his first win of the season.  Uecker appeared in 53 games for the Cardinals in 1965, collecting 33 hits in 172 plate appearances [.228].  Mr. Baseball finished the campaign with two homers and ten RBI.