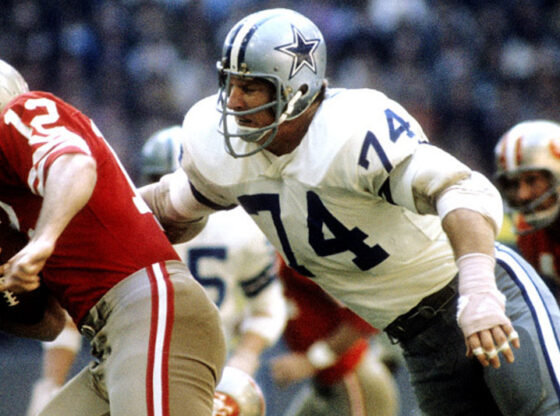 Robert Lewis Lilly was a fierce competitor.  Born in Olney, Texas on this date in 1939, he grew up in the ranching community of nearby Throckmorton.  Droughts plagued that region during the 1950s, forcing his family to move to Pendleton, Oregon to find work prior to his senior year of high school.  At Pendleton High School, he was named all-state in basketball and football before accepting a football scholarship to Texas Christian University in Fort Worth.  There, he was a two time All-Southwest Conference selection and consensus All-American as a defensive lineman.  He was also a member of Sigma Phi Epsilon fraternity.  The Dallas Cowboys joined the NFL as an expansion team for the 1960 season and participated in their inaugural draft the following year, making Bob Lilly the first player the franchise ever selected with the # 13 overall pick in 1961.   He was also drafted with the 14th overall selection in the AFL Draft that year by the rival Dallas Texans.  He signed with the Cowboys and began his career at defensive end but was moved to defensive tackle midway through his third season and the results were spectacular, as Lilly became the main cog in Dallas’ vaunted “Doomsday Defense”.  He was selected to his first Pro Bowl in 1962 and proceeded to make that squad ten more times during his career.

“Mr. Cowboy” played 14 seasons in the NFL and played in 196 consecutive games.  The only game he missed was the 1973 NFC Championship game loss to the Minnesota Vikings due to a leg injury.  He played in two Super Bowls, winning in 1971.  In that game he tackled Miami Dolphins QB Bob Griese 29 yards behind the line of scrimmage, setting a league record for longest sack that still stands today.  At 6”6”, 260 pounds, he combined size, quickness and strength that forced opponents to double and triple team him.  His agility allowed him to score four defensive touchdowns in his career, a rare feat for a defensive tackle and he recovered 18 fumbles during his time in the league.  NFL Films did a feature on Lilly and called him the “unblockable, unstoppable force of the Doomsday Defense”.

Bob Lilly had 94.5 sacks during his career and he was the first inductee into the Dallas Cowboys Ring of Honor.  He was elected to the Pro Football Hall of Fame in 1980, his first year of eligibility and he was named to the NFL’s 1960s All-Decade, 1970s All-Decade and 75th Anniversary All-Time teams.  The Sporting News named him “the greatest tackle in NFL history” and ranked him # 10 on its list of the 100 greatest football players.  Sports Illustrated named him one of the ten most revolutionary defensive players in league history and, although the Cowboys do not retire jersey numbers, no player besides Bob Lilly has worn # 74 in team history.  He was elected into college football’s Hall of Fame in 1981.

“As I’ve said before, another Lilly won’t come along in my time.  We’re observing a man who will become a legend”

-Tom Laundry, the only head coach Bob Lilly ever played for in his 14 NFL seasons.