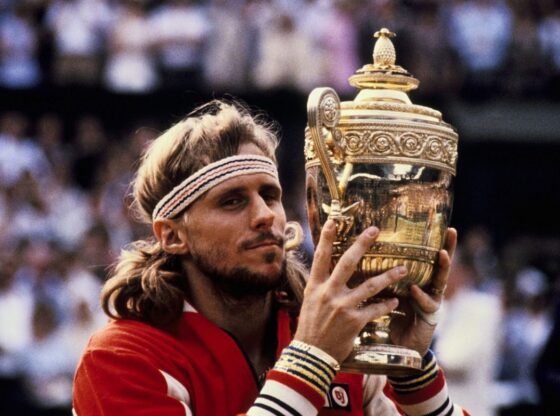 Borg dominated tennis in the 1970s and early 80s, winning 11 Grand Slam titles in just seven years.  He exploded onto the scene at 17, becoming the youngest winner of the Italian Open, then won the first of a record six French Opens having barely reached 18.  Bowlegged but very fast, the 5’11”, 160-pound right-hander possessed great strength and endurance.  Borg’s strong upper body produced heavy topspin on his forehand, and he – along with longtime rival Jimmy Connors – helped popularize the two-fisted backhand.  With extraordinary ability, good looks, and cool manner, Borg was like the Beatles.  The head-banded, golden-locked Swede was tennis’ biggest star.  Dubbed “The Iceman,” Borg was the epitome of cool.  Competing in the era of the fiery Connors, John McEnroe and Ilie Nastase, Borg was seemingly emotionless, never allowing his opponents to gauge him.

Bjorn Rune Borg won at least one major in eight straight years and claimed two major titles in the same season three times.  He was the world’s top-ranked player in 1979 and 1980 and spent a total of 109 weeks at number one.  Displaying superb footwork and a gritty resolve, Borg is the only player in the Open Era to win three major singles titles without dropping a set.  Battling from the baseline, with a Western grip forehand and a tightly-strung wooden racket, Borg won five straight Wimbledon titles between 1976 and 1980.  His first came when he beat Nastase in straight sets to become the youngest Wimbledon champion in history [surpassed by Boris Becker in 1985].  In 1977, Borg beat Connors in an epic final.  After sweeping Connors the following year and dispatching Roscoe Tanner in 1979, Borg and McEnroe squared off in one of the greatest matches in tennis history.

Fierce rivals, McEnroe and Borg were in the prime of their careers when they met at Centre Court in the men’s singles finals June 23, 1980.  It was a classic — a four-hour showdown that included 34 tie-breakers.  The fourth-set tiebreaker lasted 20 minutes, with McEnroe saving five championship points to stay alive and winning, 18-16.  The tie-break was later described as “the most riveting episode in the sport’s history.”  McEnroe could not break the Swede’s serve in the fifth, which Borg won 8-6.  It was a record fifth straight Wimbledon title for Borg, a feat later matched by Roger Federer.  The match is regarded as the greatest in tennis history, and is only rivaled by the Federer-Rafeal Nadal 2008 Wimbledon final.  The win surpassed Rod Laver’s singles winning streak of 31 matches at the All-England Club.  The following year, it built to 41 before Borg was dethroned by McEnroe in the 1981 Wimbledon final, a win that saw “Mac” succeed Borg as world number one.

Born in Stockholm – Sweden’s capital city — on this date in 1956, Bjorn is the only child of Rune and Margarethe Borg.  He grew up in Sodertalje, an industrial town 20 miles southwest of Stockholm.  In 1964, Rune Borg won a tennis racket in a ping pong tournament and gave it to his eight-year-old son.  Young Bjorn pounded balls against the door of the family’s garage for hours and was hooked.  “I loved the game from the first ball I hit,” recalled Borg.  At nine, the youngster had two dreams.  “To be part of Sweden’s Davis Cup team,” Borg said, “and to play on Centre Court at Wimbledon.”  He achieved both.  Borg won his first tournament at 11, and at 13 won both the 13- and 14-year-old divisions of the Swedish National Junior Championships.  At 15, Borg represented Sweden in the 1972 Davis Cup, winning both his singles matches.  Later that year, he won the Wimbledon junior singles title and the Orange Bowl Junior Championship for boys – two of the most prestigious junior tournaments in the world.  He dropped out of school to train full time and turned pro in 1973, at 16.

Borg won the 1974 Italian Open at 17, just before his 18th birthday.  Two weeks later, he became the youngest winner in French Open history [bettered by Mats Wilander in 1982, then Michael Chang in 1989].  The following year, he led Sweden to the Davis Cup, the first time in the 75-year history of the event that a country other than Britain, France, Australia or the United States had not won the cup.  Borg won 33 straight Davis Cup matches in his career, still a record.  His physical conditioning was legendary and unrivaled, allowing him to outlast opponents on the fatiguing clay of Roland Garros and win six French Open titles.

In a span of seven short years, the Ice Man won 11 Grand Slam titles and appeared in the finals four other times.  He was brilliant.  Borg’s dominance over a seven-year period was reminiscent of Sandy Koufax, Jim Brown and Tiger Woods, and is the stuff of legend.  Mr. Borg went 49-2 at the French Open and was 51-4 [.927] at Wimbledon, records that will likely never be broken.  In 1981, he won his sixth French Open in eight years, tying Roy Emerson for most career Grand Slam titles, with 11.  After reaching the finals at Wimbledon and the U.S. Open later that year [the third time in four seasons that Mr. Borg played in the three Grand Slam finals in the same year], Borg abruptly retired at 26.  Lacking the burning desire to win, he walked away from the sport while on top.

The game of tennis has never experienced a phenomenon quite like “Borgmania,” the intensely exciting period between 1974 and 1981.  Borg won 62 of 88 singles finals games and went 606-123 [.831] in singles for his career.  He held records for most titles and consecutive wins at both the French Open and Wimbledon.  Mr. Borg played in one Australian Open, going 1-1 in 1974, and reached four U.S. Open finals, losing twice each to Connors and McEnroe.  Mr. Borg was elected to the International Tennis Hall of Fame in 1987 and, in 2014, was named Sweden’s top sportsperson of all time.  A panel of experts assembled by ESPN.com in 2008 rated Bjorn Borg’s mental game and footwork the best of the Open Era.

“I think Bjorn Borg could have won the U.S. Open,” said Arthur Ashe.  “I think he could have won the Grand Slam.  But, by the time he left, the historical challenge didn’t mean anything.  He was bigger than the game.  He was like Elvis or Liz Taylor or something.”  Borg was 7-7 lifetime against McEnroe and 10-7 versus Connors.  After an unsuccessful comeback attempt in 1991, Bjorn joined John, Jimmy and other former adversaries on the ATP Champions Tour.