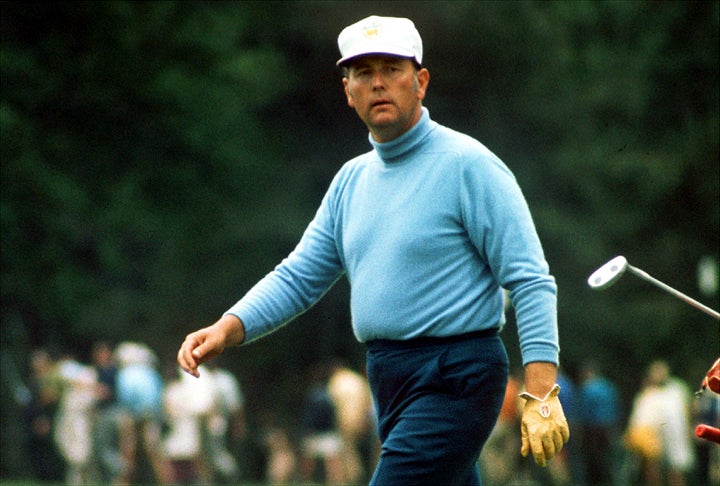 Billy Casper was an overlooked titan of golf.

Born in San Diego, California, on this date in 1931, William Earl Casper moved to Silver City, New Mexico, with his family as a toddler.  His father, who was a laborer, mowed a three-hole makeshift golf course in the family’s cow pasture and Billy began playing golf at four.  Casper’s parents divorced when he was 12, and Bill moved with his mother to Chula Vista, California, a farming community seven miles north of the Mexican border.  Casper—called “Fatso” by classmates because of his girth–began caddying at San Diego Country Club, playing golf with future Hall of Famers Gene Littler and Mickey Wright.  After caddying all day, he practiced putting in the dark to develop “feel” and became so good with a seven-iron that he could hit a telephone pole ten times in a row from 40 yards away.  Casper earned a golf scholarship to the University of Notre Dame, but returned home after one semester to marry his girlfriend, Shirley Franklin, who would be his bride for the next 62 years.  After a stint in the U.S. Navy, he qualified for the PGA Tour in 1954.

Billy Casper’s first professional win came at the 1956 LaBatt Open in Quebec.  Three years later, he won his first major, beating Bob Rosburg by a stroke at Winged Foot Country Club to take the 1959 U.S. Open.  Casper was so accurate on the greens during the Open that he putted only 114 times over 72 holes.  At the 1966 U.S. Open at the Olympic Club in San Francisco, Casper was paired with Arnold Palmer as they stood on the tenth tee during the final round.  Casper, who trailed Palmer by seven shots, said, “I’d like to finish second,” to which Arnie replied, “I’ll do everything I can to help you.”  Casper tied Palmer on the final hole and went on to shoot 69 in the playoff the following day to win his second major.  His best year came in 1968, when Casper won six times and became the first golfer to surpass $200,000 in single season earnings.  In 1970, he beat boyhood friend, Gene Littler, in a playoff to win the 1970 Masters, recalling that as kids, “Gene was so much better than me.  I never beat him as a teenager.”  Considered the best putter on the planet, Casper played on eight consecutive Ryder Cup teams and amassed more points [23.5] than any American in history.  Revered by fellow players, Casper possessed an unwavering sense of humor, generosity and zest for life.  In 1966, he spent 16 weeks in Asia supporting troops during a USO Tour.  Casper, who suffered from serious allergies, took to an exotic diet of elk, bear, hippopotamus and buffalo meat, earning him the nickname, “Buffalo Bill.”  He won the Vardon Trophy five times as leading scorer on Tour.  Only Tiger Woods has more.  Casper, who made more than 20 career holes-in-one, had the misfortune of reaching his peak in the era of Palmer, Jack Nicklaus and Gary Player, known as the “Big Three.”  The trio was uniformly handsome and athletic, while Casper resembled a chubby insurance salesman out for a weekend round.  Not a big hitter, Mr. Casper never played to the galleries, insisting on letting his game speak for itself.  He won his 51st and final PGA Tour title in 1975 before joining the Senior Tour, where he won nine times, including the 1983 U.S. Senior Open at Hazeltine.

During his peak from 1964 to 1970, William Earl Casper won 27 tournaments—two more than Nicklaus, and more than Palmer and Player combined.  “Billy was probably underrated by those who didn’t play against him,” said Nicklaus. “Those who did compete against him know how special he was.”  Buffalo Bill won at least one tournament a season for 16 straight years.  He won 51 events—only six players in history have won more—including three majors.  Dave Stockton competed against Casper for two decades.  “Billy Casper was everything good about being a professional.  He was a kind and gentle man—a great player.  It should have been the Big Four.”  Ever charitable, Mr. Casper hosted the Billy Kid’s Golf Classic at San Diego Country Club for over 20 years, raising more than three million dollars for San Diego-based non-profits.  In 1992, he founded the Billy Casper Youth Foundation, dedicated to helping children.  Bill Casper entered the World Golf Hall of Fame in 1978 and the PGA Hall of Fame in 1982.  Sports Illustrated named him on of the top 20 players in history and he received the PGA Distinguished Service Award–the PGA of America’s highest annual honor–in 2010.  Mr. Casper died of heart failure in February 2015.  He was 83 years old and is survived by eleven children and 71 grandchildren and great grandchildren.

“It makes me very happy to tell people that I was one of his friends, that I was a friend of Billy Casper’s.”