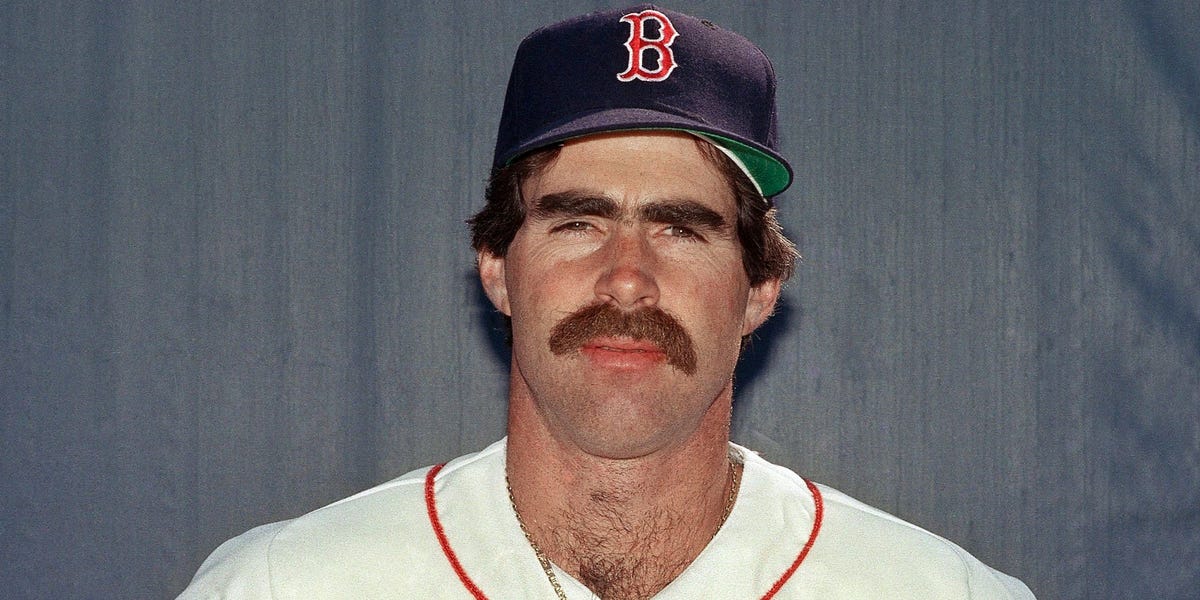 Bill Buckner is one of 29 players in MLB history to play in four decades.

An outfielder, first baseman and designated hitter, Buckner played for six teams over 22 major league seasons.  The 1980 National League batting champion hit .300 or better in eight seasons and finished in the top ten in the league six times.  Buckner led the NL in singles in 1982, and twice led the circuit in doubles.

A terrific contact hitter who used the entire field, Buckner led the league in fewest strikeouts-per-nine-innings four times and finished in the top ten 11 times.  Billy Buck was a fleet baserunner until two ankle surgeries in the mid-1970s slowed him.  He twice finished in the top ten in the NL in stolen bases, including 1974, when he batted .314, collected 182 hits while helping the Los Angeles Dodgers win the NL pennant.

The left-handed Buckner played primarily as a corner outfielder for his first eight big league seasons, then moved to first base in 1977.  A career .992 fielding first baseman, he finished in the top ten in the league in range factor [putouts + assists] in nine seasons.  Buckner had more assists than any first baseman in the league four times and recorded nearly 14,000 career putouts at first.

In the wee hours of the morning of October 26, 1986, at Shea Stadium, Bill Buckner was involved in a play that has been prominently entrenched in baseball lore.  In a moment that will live in infamy for Red Sox Nation, Buckner let an easy ground ball dribble between his legs and roll down the right-field line.  More than a routine fielding error, the play spelled disaster for Boston and remains the most egregious error in World Series history.

While Red Sox fans were quick to crucify Buckner and blame the Curse of the Bambino [rather than lack of clutch pitching and timely hitting] for the umpteenth time, responsibility for the Game 6 loss must be shared by many.

Manager John McNamara did not put in a defensive replacement for Buckner in the ninth inning, and he overextended Calvin Schiraldi.  Leading 5-3 in the 10th, the Red Sox closer was sent to the mound for his third inning of work to face the Mets’ 2-3-4 hitters.  After retiring the first two batters he faced, the Red Sox righthander was one out away from capturing team’s first World Series title in 68 years.

With veteran reliever Bob Stanley warm and ready in the bullpen, Schiraldi allowed two straight hits — and McNamara left him in.  Ray Knight singled to carve the deficit to 5-4.  Enter Stanley, who had been the BoSox closer for much of the season.  While Bob Costas prepared to present the Commissioner’s Trophy in the champagne-filled Red Sox clubhouse, Mookie Wilson stepped in to face the 31-year-old Stanley.  With Boston one strike away from a world championship, Stanley uncorked a wild pitch, allowing Kevin Mitchell to score from third and tie the game.

On the tenth pitch of the at-bat, after he’d knocked six pitches foul, Wilson poked a ground ball to Buckner at first.  Buckner bent to field the ball, but it bounced right over his glove and kept rolling down the right-field line.  Right fielder Dwight Evans did not back up Buckner and Knight, who had advanced to second on the wild pitch, scored the winning run.  The Mets tied the Series at three and won the deciding Game 7 two nights later.

“Little roller up along first.  Behind the bag.  It gets through Buckner!  Here comes Knight, and the Mets win it!”

Had McNamara, Schiraldi, Stanley, Buckner or Evans done their job, the Boston Red Sox would have likely won the 1986 World Series.

Born in Vallejo, California, December 14, 1949, William Joseph Buckner grew up in Napa County.  At Napa High School, Buckner was a two-time All-State wide receiver and was named 1967 Cal-Hi Mr. Baseball.  The Dodgers selected Buckner in the second round of the 1968 MLB draft and assigned him to the Pioneer Rookie League.  After batting .323 in two minor league seasons, the speedy outfielder made his big-league debut as a September call-up in 1969, at 19.

Billy Buck earned a job as the Dodgers Opening Day right fielder in 1971 and remained an every-day player for six seasons in Los Angeles.  He hit over .300 three times before being traded to the Chicago Cubs in 1977.  The Cubs moved Buckner to first base, where he remained for the final 14 years of his career.

Buckner enjoyed his best years in Chicago.  The mustachioed southpaw twice finished in the top ten in MVP voting.  He hit a career-best .324 to win the batting title in 1980 and was named to the only All-Star team of his career the following season.  Buckner led the NL in at-bats in 1982, one of six seasons in which he finished in the top ten.

In 1985, the Cubs traded the 34-year-old Buckner to Boston.  In his first season in Beantown, Buckner was an iron horse, tying the MLB record by playing in all 162 games.  He broke the major league record for assists, with 184, and drove in a career-best 110 runs.  The following year – despite being hampered by leg problems – the gritty Buckner played in 153 games, collecting 168 hits while driving in 102 runs.

I can’t remember the last time I missed a ball like that.  But I’ll remember this one.

Buckner, who collected more than 2,700 hits and belted nearly 500 doubles in a career that spanned four decades, was traded to California midway through the 1987 season.  In 1988, he was dealt to Kansas City.  Mr. Buckner returned to the Red Sox in 1990, where he was greeted with a five-minute standing ovation on Opening Day at Fenway Park.

Bill Buckner hit 174 homers during his underappreciated career.  The last was an inside-the-park job.  On April 24, 1990, the 40-year-old first baseman lined a 1-1 pitch off Kirk McCaskill down the right field line at Fenway Park.  California Angels right fielder Claudell Washington raced for the ball and crashed into the three-foot-high right-field wall.  Washington somersaulted into the front row of seats and remained there as the ball bounded back into fair territory.  One of the slowest runners in baseball, the gimpy-legged Buckner hobbled around the bases for his only homer of the season.  Billy Buck retired from baseball six weeks later.

On this date in 1974, Bill Buckner went 2-for-4 and stole a base to help Los Angeles edge the Philadelphia Phillies 1-0 at Dodger Stadium.  L.A. lefthander Tommy John threw a four-hit complete game shutout to go 5-0 on the season.  The Dodgers would finish 102-60 and capture the NL pennant before losing the World Series to the Oakland A’s in five games.