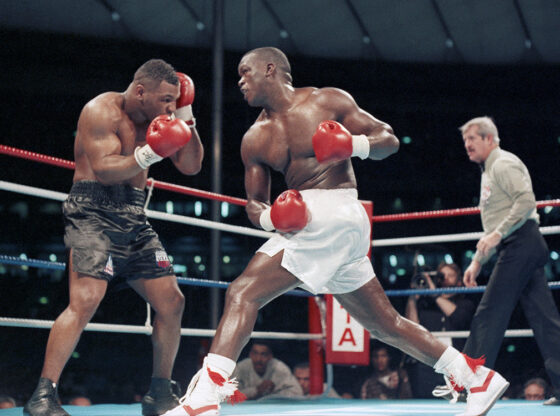 An upset is defined as “an unexpected victory of a competitor that was not favored.”

The Daily Dose loves major upsets.  Here are some of the biggest of all time.

Rulon Gardner wins the heavyweight wrestling gold medal.  Heading into the 2000 Sydney Olympics,  Aleksandr Karelin had been undefeated for 13 years and not given up a point in six.  In The Miracle on the Mat, Rulon beat the Russian Bear, 1-0, to claim Greco-Roman gold.

Mike Tyson was the Baddest Man on the Planet. Buster Douglas was a 42-1 underdog.  When the two met in Tokyo in December 1990, nobody gave Douglas a chance.  Buster knocked out Iron Mike in the tenth to claim the heavyweight title.

The Michigan Wolverines have the winningest program in college football history.  In the first game of the 2007 season, fifth-ranked Michigan hosted Appalachian State at the Big House.  The Mountaineers won, 34-32, knocking the Wolverines out of the Top 25.  It was the first time in history that a Division I-AA squad beat a Division I team ranked in the Top Ten.

At the 1955 U.S. Open at the Olympic Club, the great Ben Hogan was poised to win the tournament for a record fifth time.  Jack Fleck, a little-known municipal-course pro from Iowa, had other ideas.  After tying The Hawk with a dramatic final round finish to force a playoff, Fleck beat Hogan by three shots the following day to claim the first of three career victories on the PGA Tour.

The NFL clobbered the AFL in the first two Super Bowls.  Things didn’t look any different in January 1969, when the NFL’s Baltimore Colts were installed as an 18-point favorite over the New York Jets in Super Bowl III.  Joe Namath and the Jets validated the AFL with a 16-7 victory in one of the most important football games ever played.

On the first Saturday in May of 2009, Mine That Bird pulled off one of the biggest upsets in Kentucky Derby history.  Going off at 50-to-1, the three-year-old gelding pulled away to win by nearly seven lengths, paying $ 103.20 on a two-dollar wager.

The top-ranked Georgetown Hoyas seemed invincible in 1985, coming into the NCAA tournament with a record of 35-2 to earn the number-one seed.  After going 11-8 in the Big East, the Villanova Wildcats were an eighth seed.  ‘Nova shot 22-for-28 from the field – the highest field goal percentage in Final Four history – and shocked the Hoyas, 66-64, for their first-ever national championship in men’s basketball.

Between 2005 and 2014, Rafael Nadal lost one match at the French Open.  In May 2009, Robin Soderling – a number 23 seed – ended Rafa’s 31-game winning streak at Roland Garros to pull off the biggest upset in tennis history.

Dan Gable is the most important wrestler to ever live.  Undefeated and winner of three Iowa state high school titles, Gable entered the final match of his college career having never lost a match in his life.  In the 1970 NCAA final, Washington’s Larry Owings beat Gable to win the 142-pound national title.  Gable went a combined 181-1 in high school and college, then coached the University of Iowa to 15 national championships.

With an enrollment of 161 students, Milan High School is the smallest school ever to win an Indiana single-class state basketball title.  In 1954, the Indians went 28-2 – including a 13-point drubbing of Oscar Robertson’s Chrispus Attucks Pioneers, en route to the championship.  The “Milan Miracle” inspired the 1986 film, Hoosiers.