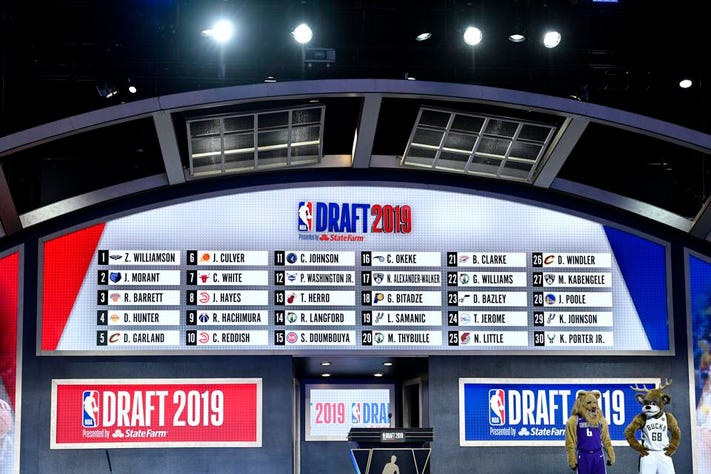 Sixty players will be selected in two rounds.  While every team is looking for the next Magic, Michael, Larry or LeBron to take them to the promised land, some of the players chosen today will fizzle as pros.

Today marks the 73rd edition of the NBA draft.  Over the course of those seven-plus decades, many draft-day mistakes have been made.  Let’s take a look at ten of the biggest busts of all time.

Anthony Bennett [1st overall, Cleveland Cavaliers, 2013].  Since being taken first by Cleveland six short years ago, Bennett floundered with four teams before washing out of the NBA.  Cleveland could have taken Indiana’s Victor Oladipo, but instead selected the underachieving Bennett, whom they traded to Minnesota after one season.  Labeled as lazy and with no desire to overcome adversity, the 6’8” power forward averaged fewer than five points per game.  Now trying to save his career in the NBA’s G League,  Bennett is toiling in Ontario, California, for the Agua Caliente Clippers

Pervis Ellison [1st overall, Sacramento Kings, 1989].  As an All-American at Louisville, where he led the Cardinals to the 1986 NCAA title, Ellison was known as “Never Nervous Pervis.”  In 11 injury-plagued NBA seasons, the 6’9” center became known as “Out of Service Pervis.”  After missing half of his rookie season with an injury, Ellison was dealt to Washington.  He later signed with Boston, but played in only 69 of a possible 246 games over his final three seasons as a Celtic.  Ellison joined the Seattle Supersonics in 2000 before retiring nine games into the season.

Adam Morrison [3rd overall, Charlotte Bobcats, 2006].  The most prolific scorer in the 2006 draft, Morrison averaged 28 points per game as a junior at Gonzaga.  But he left all that offense in Spokane.  In that stellar junior season, the 6’8” swingman scored roughly 300 points fewer than he did during his entire NBA career.  “The Stashe” played only three NBA seasons, averaging 7.5 points while shooting 37 percent from the field.

Darko Milicic [2nd overall, Detroit Pistons, 2003].  Barely 18 when Detroit selected him, Milicic was supposed to be the next Dirk Nowitzki, but that never happened.  Taken ahead of Carmelo Anthony, Dwayne Wade and Chris Bosh, Milicic never showed even glimpses of being worthy of his draft status.  The 7-foot Serbian started only 208 games in ten NBA seasons, averaging a mere six points per contest.

Chris Washburn [3rd overall, Golden State Warriors, 1986].  Four of the top ten players selected in the 1986 draft had their careers derailed by drug problems, including Len Bias, William Bedford and Roy Tarpley.  Despite getting caught stealing a stereo while enrolled at N.C. State and being notoriously lazy, Golden State still deemed Washburn too good to pass up and selected him with the third pick.  Washburn, who scored a measly 222 points in his disastrous career, failed three drug tests in three years and was banned from the NBA for life.

Kwame Brown [1st overall, Washington Wizards, 2001].  Drafted on potential instead of talent, Brown was immature, lacked direction and possessed poor fundamentals.  This overly-hyped seven-footer came into the league straight out of high school and retired at 30.  During that time, he averaged fewer than seven points and six rebounds while playing for seven different organizations.

Micheal Olowokandi [1st overall, Los Angeles Clippers, 1998].  This seven-foot Nigerian did not even pick up a basketball until he was 18.  Five years later, the Clippers made him the first overall selection of the NBA draft.  Bad idea.  After averaging 22 points and 11 rebounds per game as a senior at Pacific,  Olowokandi was named Big West Player of the Year.  The Clips thought so much of him that they drafted the unproven pivotman ahead of Dirk Nowitzki, Paul Pierce, Vince Carter and Antawn Jamison.  “Kandi Man” played for three teams over nine uneventful NBA seasons, averaging more fouls per game [3.0] than free throws attempted [1.9[

Greg Oden [1st overall, Portland Trail Blazers, 2007].  Portland chose Oden over Kevin Durant in 2007.  In seven years, Oden scored 840 points in 105 NBA games.  Meanwhile, KD has played in ten All-Star games, scored over 23,000 points and grabbed more than 6,000 rebounds while winning two NBA titles.  The injury-riddled Oden is no longer in the league.  The 7’0”, 275 behemoth missed four entire seasons and played sparingly in three others before retiring at 26.

LaRue Martin [1st overall, Portland Trail Blazers, 1972].  The least productive number one pick in history, Martin averaged a miniscule 5.3 points per game during his four-year career.  Selected before Hall of Famers Bob McAdoo and Julius Erving, Martin shot an anemic 41.6 percent from the floor despite being seven feet tall.  He blocked half a shot per game and couldn’t even crack the starting lineup.

Sam Bowie [2nd overall, 1984].  It seems the Blazers have rotten success drafting big men.  The only person keeping LaRue Martin from being labeled the biggest draft bust in NBA history is Sam Bowie.  Despite missing two full seasons at Kentucky with stress fractures in his legs, Portland thought the 7’1” pivotman would lead them to a title.  Selected number two overall – between Hakeem Olajuwon and Michael Jordan – Bowie suited up for only 139 games in four seasons in Portland.  He played four seasons with New Jersey and two with Lakers before calling it quits at 33.