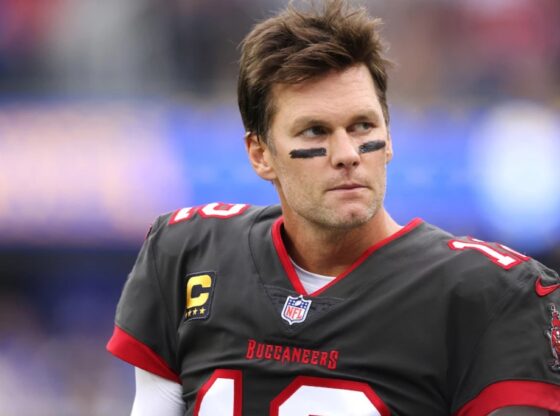 The 2018 NFL Draft gets underway tomorrow in Arlington, Texas.  Despite the enormous amounts of time and money devoted to it, the draft is the biggest crapshoot in sports.

Here are a dozen of the biggest draft-day steals in pro football history, all of whom are, or will be, members of the Pro Football Hall of Fame.

Before leading the New England Patriots to five Super Bowl titles in eight appearances, Tom Brady was the 199th player taken in the 2000 draft.  The sixth-rounder out of Michigan went on to become the greatest quarterback in NFL history.

Deacon Jones may be the best defensive end ever to play the position, yet he was selected in the 14th round – 186th overall – by the Rams in 1961.  The Secretary of Defense went on to invent the quarterback sack, make the NFL 75th Anniversary All-Time Team, and become the most valuable Ram of all time.

In 1956, 199 college players were drafted ahead of Alabama’s Bart Starr.  MVP of the first two Super Bowls, Starr led the Green Bay Packers to seven NFL titles.  A superb player and even better person, Starr has the highest postseason passer rating [104.8] of any quarterback in history.

Terrell Davis was the 196th player taken in 1995 and was named NFL MVP three years later.  The Denver Broncos all-time leading rusher had his career cut short by injury, yet still earned a spot on the 1990s All-Decade Team and in the Broncos Ring of Fame.

Johnny Unitas was not taken until the ninth round of the 1955 draft – 102nd overall.  Johnny U is football royalty, setting every important passing record while inventing the two-minute offense and establishing the prototype for the modern-era quarterback.

Despite winning the Outland Trophy as the best college lineman in the land, two-time All-American Bobby Bell was not selected until the seventh round of the 1963 AFL Draft.  An outstanding athlete, Bell led the Chiefs to the only Super Bowl title in franchise history and was named to the AFL All-Time Team.

Who could have known that Richard Dent, the 203rd overall pick of the 1983 draft, would lead the NFL in sacks two years later?  A cornerstone of the greatest defense in football history, Dent played in four Pro Bowls and was MVP of the only Super Bowl win in Bears history, in 1985.

John Unitas’ favorite target was Raymond Berry, who went in the 20th round of the 1954 draft.  Berry led the league in receiving yards, receiving touchdowns, and receptions.  A standout on Colts teams that won NFL titles in 1958 and ’59, Berry joined Unitas on the NFL 75th Anniversary All-Time Team.

After winning the 1963 Heisman Trophy as a junior at Navy, the Dallas Cowboys selected Roger Staubach in the tenth round.  Following his service commitment – including a tour in Vietnam — Roger the Dodger joined the Cowboys in 1969.  Staubach guided the Cowboys to two Super Bowl titles, was named to the 1970s All-Decade Team, and has been inducted into both the college and pro football halls of fame.

A ninth-round pick in the 1967 draft, Ken Houston was the premier free safety of his era.  In 14 seasons – six with the Houston Oilers and eight with the Washington Redskins – Houston played in a dozen Pro Bowls.  With an uncanny nose for the football, Houston intercepted 49 passes, recovered 21 fumbles and scored 12 touchdowns in his career.

Before being named to the 1950s All-Decade Team and NFL 75th Anniversary All-Time Team, Rosey Brown was an obscure offensive tackle out of Morgan State.  The New York Giants drafted him in the 27th round – 321st overall – and Brown went on to dominate pro football, playing in nine Pro Bowls while helping the Giants to six division championships.

Shannon Sharpe went from being the 192nd pick of the 1990 draft to becoming the NFL’s all-time leader in receptions, receiving yards and touchdowns by a tight end at the time of his retirement [since surpassed by Tony Gonzalez].  A three-time Super Bowl champion, Sharpe played in eight Pro Bowls and is a member of the 1990s All-Decade Team.

Who will be the sleeper of this weekend’s NFL Draft?

Jack Nicklaus – The Greatest Golfer of All Time
A Dozen Duds