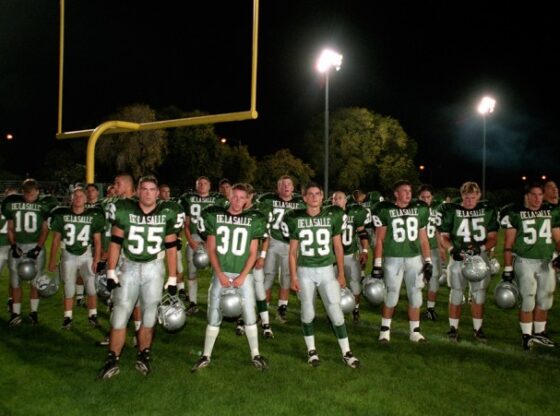 Long winning streaks are hard to achieve.  Some are legendary.  Here are our ten favorite win streaks in team sports history.

On January 19, 1971, the UCLA Bruins lost a basketball game to Notre Dame.  For the next three years, they went undefeated, amassing 88 straight victories and two national championships.  The streak ended January 19, 1974, when Notre Dame beat the Bruins in South Bend, 71-70.

After losing to Notre Dame and tying Pitt to start the 1953 football season, the Oklahoma Sooners went on to win a then-record 47 consecutive games.  The streak helped OU capture national titles in 1955 and 1956.  Oklahoma went undefeated in conference play from 1949 to 1959.

The New England Patriots won 21 consecutive games.  Starting in Week 5 of the 2003 season, the streak spanned through the first of back-to-back Super Bowl titles the following year.  In 2007, the Pats were undefeated when the New York Giants wrecked their perfect season in the Super Bowl.

The Miami Hurricanes men’s tennis team won 137 matches in a row from 1957 to 1964.  The longest streak in all of college sports began with a win over Presbyterian [S.C.] in the third match of the 1957 season and ended with the final match of the 1964 campaign.

In 1971-72, the Los Angeles Lakers won 33 straight.  It was Wilt Chamberlain’s second-to-last season in the NBA, and the Big Dipper led the Lakers to a 69-13 mark and the NBA title.  It was the franchise’s first championship since moving from Minneapolis.

The UConn women went nearly three full basketball seasons without a loss, winning 111 games in a row.  The streak began with a win over Creighton in December 2014.  It ended at the 2017 Final Four with a loss to Mississippi State at the buzzer.  Connecticut’s is the longest streak in college basketball history.  The second-longest also belongs to the Lady Huskies, who won 90 straight from April 2006 to December 2010.

From May 2003 to October 2004, Arsenal played 49 top flight European soccer matches without a loss.  Arsenal outscored its opponents 112-35 during the stretch, which ended with a controversial loss to Manchester United in 2004.